On leadership, the times, the world & the Church 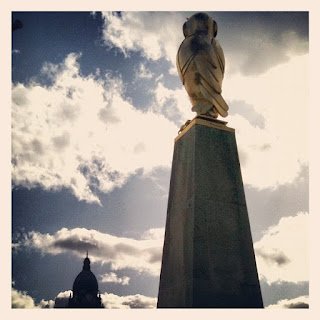 As I was driving along this evening, I heard part of Any Questions on the radio. This week's Labour MP, in reply to one of the questions, was attempting to lampoon the prime minister on the basis of something he once said about why he wanted the job. I'm not sure if she was exaggerating or if it was an exact quotation, but according to the Labour MP, Mr Cameron said he wanted to be PM because he thought he'd be rather good at it. Of course, the Labour MP was shocked and appalled at such a statement, but it's what she said next that particularly interested me; she said that what an aspiring prime minister should be telling us is where he'd take us: how he'd change the country.

In the days we live in, such a view of leadership doesn't seem to be confined to those who sit on green benches in Westminster. The wisdom of the age is that leadership is all about change. Where are you taking us? How will you change things? Whether in the Palace of Westminster, Fleet Street, the City or in any other area of the life of the country that seems to be the view of the day when it comes to the role of leadership.

And the Church isn't exempt from such a view. If I didn't know I was listening to an MP talk about the PM, I could just as readily have believed it was someone talking about church leadership.
But the thing is, it struck me as I heard the Honourable Member speak, that such a view is really very contemporary. It's the wisdom of our current generation, not some timeless concept of leadership. For previous generations, leading the country meant governing. Yes, some changes would need to be made as time went on, but change wasn't what defined the role. Stability was of much greater importance than change.

In the Church too, before 'leadership' as a concept came into vogue, Christians used to think in terms of church government. And again, stability was important; but not stability of the same sort as in the governance of the realm. The stability needed in church government was the stability of being founded firmly upon Christ, the Rock of Ages. Ephesians 4:12-16 points to stability as an essential outcome of Christ's gift of ministers to His Church.

So, as I was driving along, I was wondering: have we followed too far in the ways of the world and in the spirit of the age when it comes to our view of leadership in the Church?
Labels: church ecclesiology ministry