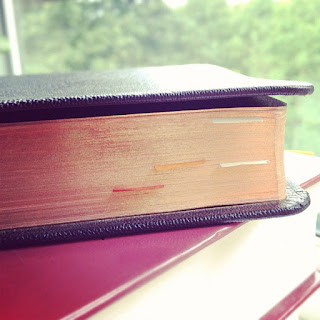 I have a few arrow shaped post-its protruding slightly from the side of my Bible. They're there to help me turn up a verse quickly (usually a verse I want to read in the sermon without any delay of looking it up), and so they get moved about from week to week (and from morning to evening). But on Sunday morning, as I was rearranging my post-its, I realised that there was one which had been in place for a very long time indeed and which I had never moved.

Now, this post-it wasn't there for so long just by accident. It had been there so long that I didn't consciously think about it, but it was there for a long time for a purpose. It was even a different colour from all the other post-its to mark it as different. You see, the verse it marked, wasn't a verse I wanted to be able to turn up for one sermon, but rather the single verse I most often have to find to show people. And, why? Because it's a verse of extreme importance.

It's Luke 24:27: 'And beginning at Moses and all the Prophets, He expounded to them in all the Scriptures the things concerning Himself.' That my friends, is one of the most important verses in the history of Bible verses!

Well, now obviously all Scripture is equally inspired, and all Scripture is to be read in context (not just a verse plucked out here and bandied about there), so why do I single out this verse as so important? And why do I point people to it so very often?

It really is a key verse. Not because it is itself some magic key, but because it points us to He who is the Key - Jesus. For that's what we learn in Luke 24:27: the key to the interpretation of all of Scripture is Jesus Christ. It's not an idea, a philosophy or a doctrine which opens up the Scriptures to us, but a Person, and only one Person - Jesus.

As I've already said that verses must be read in their context, let me quickly recap the context here. This is the day of the Resurrection and Jesus is walking along the road to Emmaus with two of His disciples, but they don't recognise Him. They know all about the crucifixion, and they've heard reports about the Resurrection, but they're confused and don't really know what's going on. None of it makes sense to them. So what does Jesus do? He opens up the Bible to them and makes it all clear how the Scriptures had already taught that 'the Christ [ought] to have suffered these things and to enter into His glory' (Luke 24:26).

But the Old Testament isn't the whole of Scripture. Scripture is a technical term, and so what's said about Scripture as a category of writing applies not only to the then already completed Old Testament, but also to the New. In fact, Jesus not only demonstrates here that He is the subject of the whole of the Scriptures, but also teaches it in John 5:39: 'You search the Scriptures, for in them you think you have eternal life; and these are they which testify of Me.' That's simply what Scripture is: the written Word of God which testifies to Christ the Word of God.

I'm always pointing people to Luke 24:27 because there Jesus points them to the true key to unlocking the Scriptures: Jesus Himself. The Bible isn't a book about me, it's a book about Jesus, and if I want to truly understand the Word and know it's power in my life, I need to see Jesus in His Word.