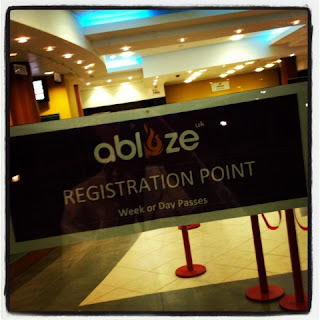 Ablaze UK got off to a fine start in it's brand new location tonight. No more marquee on the seafront in Swansea, but instead a much bigger arena at the racecourse in Cheltenham.

And it wasn't just the great new facilities that had people's attention this evening. Right from the beginning Olivia Crolla (worship leader from the Edinburgh assembly) and the Living Well Worship Team (from the Whitfield assembly) pointed attention away from unfamiliar surroundings and to the greatness of our mighty Redeemer God.

The Lord spoke prophetically about His purpose in the Convention, saying 'I have gathered you at this time on this Mount ... that I might reveal my glory over your lives and that you might go from this gathering and impact the world around you... On this Mount I would impart to you again that you might go and proclaim the risen Christ with healing in His wings.'

Tonight's preacher was Malcolm Duncan (director of Church and Community, & pastor of Gold Hill Baptist Church), who took as his text Deuteronomy 1:1-8. Malcolm showed how these verses remind us that God always speaks into a context. We don't have to take ourselves out of our contexts to hear God's Word, but rather, the Word comes to us and meets us in our circumstances.

He also highlighted the total agreement between the Spirit and the Word and pointed out that 'If you claim to walk in the Spirit, but aren't keeping the commandments, then you're not walking in the Spirit!'

Malcolm perceptively underscored a significant problem: 'We as British Pentecostals have made the spectacular more important than character' and thus forgotten the true role of the Spirit.

When the Spirit points out our sin, it isn't so we feel bad, but so that we get released. Conviction might make you feel small, but it shows you there's a great big God waiting to embrace you.

Those were just a few highlights of the evening. Malcolm Duncan's preaching again tomorrow morning, do stay tuned for more from Ablaze.
Labels: AblazeUK Apostolic Church