Not a Magic Wand 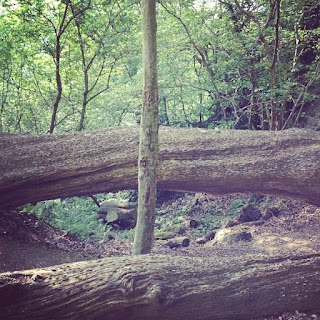 The event I have in mind is from Exodus 17:8-16. The Amalekites have come up to attack the Israelites at Rephidim. Joshua is sent out to fight, and Moses goes to the top of the hill where he lifts up 'the rod of God' above his head. And as long as Moses held the rod up, 'Israel prevailed', but when his arms grew weary and he let the rod down, 'Amalek prevailed' (Exodus 17:11). So Moses ends up sitting on a stone with Aaron and Hur holding his arms up in the air.

So, what did the rod point to? Not just to grand themes of judgement, deliverance and grace, but to God's great act of judgement, deliverance and grace. The rod was the wood which pierced the LORD as He stood between Moses and the Rock (Exodus 17:6), and that piercing wood points us to the great piercing wood; it points us to the Cross, where Christ the LORD would be pierced to bear the judgement for the sins of the world to bring God's deliverance to His people by His grace. The rod speaks to us of the Cross (by which, of course, we mean more than the wooden beams, but more precisely Christ and Him crucified).

There's a bit more about this battle that isn't to do with the rod, but we'll save it for another day.
Labels: Cross Exodus Jesus Old Testament