Another Fought For Us 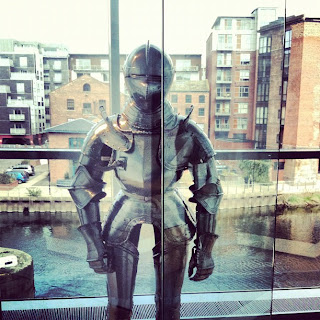 Yesterday I was writing about Moses lifting up the rod of the LORD as Joshua went into battle against the Amalekites in Exodus 17:8-16, focusing on what when on up the hill. But today let's turn our attention to what happened down the hill.

Up the hill there's Moses with the rod, and Aaron and Hur holding up his arms. But it's at the bottom of the hill that the victory's won. Moses doesn't fight. Moses doesn't lead the troops. Moses isn't in the battle.

But someone else is. Joshua is there. Joshua leads the troops. Joshua fights. Joshua wins the battle. 'So Joshua defeated Amalek and his people with the edge of the sword' (Exodus 17:13).


Now, before you start writing letters to try to get me defrocked, let me just point out that I'm not questioning the inerrancy of Scripture or the historicity of Exodus 17 in any way. Yes, there was a man there who won the victory whom we know as Joshua. It's just that he wasn't called Joshua yet. Joshua didn't exist until Numbers 13, when Moses gave this man a new name (i.e. Joshua). Until then, however, he wasn't called Joshua, but Hoshea. So, strictly speaking, it was Hoshea who won the victory over the Amalekites.

So, why does the Bible use the name he hasn't yet got when he wins the victory? Because that name shows us the true Victor. Joshua is a name adapted into English from Hebrew. But we know the same name in a different form, when instead of going straight from Hebrew to English, it goes via Greek. Hebrew English Joshua = Greek English Jesus!


Of course, there are a few differences between Jesus victory and Joshua's victory over the Amalekites. Where Joshua won by living, Jesus won by dying. Christ's victory comes through the apparent defeat of the Cross, where by His death He won the victory over all God's enemies and over all that would fight against the children of God to cast them down.

And, where Joshua's victory was partial and temporary (the Amalekites would live to fight another day, and would continue to threaten Israel right down to the time of Esther), Jesus' victory is once-and-for-all complete. Christ has made a full atonement and 'it is finished'.

So, like Moses, we don't go off to fight and win the battle for ourselves; we look instead to our Joshua, Jesus, who has won the victory for us. Like Moses, we don't rely on our strength or ability; we trust instead in One who took our place and won for us.

Another has fought for us, and He has won!