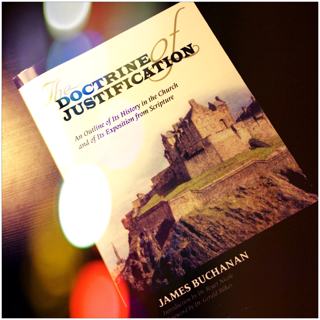 Justification is 'the doctrine on which the church stands or falls.' It might not be the whole of what the Bible teaches us about salvation, but it stands right at the centre of what the Bible teaches about salvation, and every other part of soteriology is related to it. So the doctrine of justification is quite important. And as it's so important, it's a doctrine worth knowing and understanding well.

So, before I get to the thirty-odd propositions that form the actual contents of this post, let me just recommend the book from which they come. The Doctrine of Justification by James Buchanan was written in 1866, but is probably the most comprehensive book on the evangelical Protestant doctrine of justification by grace alone through faith alone ever written. Buchanan first goes through the history of the doctrine, pausing to look at the significant errors along the way (many of which still crop up with a considerable degree of regularity in pentecostal and evangelical churches today - so they're well worth knowing about!), and then gives an exposition of the doctrine of justification structured around thirty-odd propositions. (I say thirty-odd, because, according to their numbering there are 34 propositions, but I can't find number 30 anywhere, so there only really seem to be 33.)

As such a central gospel doctrine, justification is something all of us could profitably learn more about. And pastors and elders need to know and understand this doctrine even more so - not only for teaching and preaching (as Martyn Lloyd Jones put it, 'There should be little difficulty in stating the doctrine of Justification by Faith clearly. One who cannot do so should never stand in a pulpit.'!), but also for a great deal of counselling/encouraging/pastoral work (you know, the 'cure of souls'). So I'd really recommend that ministers work their way through Buchanan to get a good grounding in this key doctrine, both biblically and historically (as the history helps guard from errors).

Anyway, I thought Buchanan's 33/34 propositions might be useful even on their own, so here they are:

Prop. I. Justification is a legal, or forensic term, and is used in Scripture to denote the acceptance of any one as righteous in the sight of God.

Prop. II. While 'Justification' is a forensic or legal term, it is used in Scripture to denote, sometimes the acceptance of a sinner as righteous in the sight of God, — sometimes the manifestation or proof of his acceptance, by which it is attested and made sure: and this variety in the application of it is the ground of an important theological distinction, — the distinction between ACTUAL and DECLARATIVE Justification.

Prop. III. The distinction between actual and declarative Justification, — viewed in connection with the difference between a living and a dead faith, — affords a sufficient explanation of the apparent discrepancy between the teaching of Paul and James.

Prop. IV. The term 'Justification' denotes, either an act of God, or a privilege of His people; and, in both cases, that which is denoted by it includes absolution and acceptance, — the full pardon of sin, admission into God's favour, and a title to eternal life.

Prop. V. Justification, although inseparably connected with, is yet essentially different from, Sanctification; and the former is not founded on the latter, as its procuring or meritorious cause.

Prop. VI. As Justification is a forensic, legal, or judicial term, so that which is denoted by it must necessarily have some relation to the Law and Justice of God.

Prop. VII. The rule of Justification, as revealed to man in his state of original righteousness, was the Law of God in the form of a divine covenant of life.

Prop. VIII. The breach of the Law in its covenant form by the sin of our first parents, rendered it for ever impossible that either they, or any of their descendants, should be justified on the ground of their personal righteousness.

Prop. IX. The Law of God, which is the rule of man's duty, is also a revelation of God's eternal justice and holiness.

Prop. X. The doctrine of the Law is presupposed in that of the Gospel, and the justifying righteousness which is required in the one, is revealed in the other.

Prop. XI. It was God's eternal purpose to overrule the fall of man for His own glory, by a signal manifestation of all His moral perfections, in justifying 'the ungodly' through Christ as Mediator.

Prop. XII. Christ, as Mediator, was 'made under law' as the substitute, representative, and surety, of His people.

Prop. XIII. The Mediatorial work of Christ on earth properly consisted in His humiliation, sufferings, and obedience; or, as it is stated by the Apostle, 'He humbled Himself, and became obedient unto death, even the death of the Cross.'

Prop. XIV. The Mediatorial work of Christ, including both His sufferings and His obedience, constituted a complete and effectual satisfaction to the Law and justice of God.

Prop. XV. The Justification of sinners is directly connected in Scripture with the Mediatorial work of Christ, as a satisfaction rendered to the Law and Justice of God.

Prop. XVI. The righteousness, which is the ground of a sinner's Justification, is denoted or described by various terms in Scripture, so that its nature may be determined by simply comparing these terms with one another; and then ascertaining whether there be any righteousness to which they are all equally applicable, and in which they all coincide, in the fulness of their combined meaning.

Prop. XVII. This righteousness, — being the merit of a work, and not a mere quality of character, — may become ours by being imputed to us, but cannot be communicated by being infused; and must ever continue to belong primarily and, in one important respect, exclusively to Him by whom alone that work was accomplished.

Prop. XVIII. The imputation of Christ's righteousness to His people, as the immediate ground of their pardon and acceptance with God, may be proved, deductively, from the character in which He acted, as their representative; and from the vicarious nature of the work which He undertook to accomplish.

Prop. XIX. The righteousness of Christ, considered as the merit of His Mediatorial work, is, not partially, but entirely imputed, and is effectual for the complete Justification of all who believe in His name.

Prop. XX. The imputation of sin and righteousness is not, in any bad sense of the expression, a 'legal fiction', as it has been offensively called; nor is it a theory, invented by man, but a fact revealed by God.

Prop. XXI. When God forgives sinners, and accepts them as righteous in His sight, they are 'justified freely by His grace, through the redemption which is in Christ Jesus.'

Prop. XXIV. Justification by 'works', such as are really 'good' and 'acceptable to God', is also excluded in the case of believers, excepting only as it may be manifested or declared by them.

Prop. XXVI. The Faith, by which we are justified, is a spiritual grace, — as being the gift of God, and one of the fruits of His Spirit, — and, as such, is acceptable and well-pleasing to Him 'through Jesus Christ'.

Prop. XXVII. A real influence or efficacy is ascribed to Faith in connection with our Justification, but it is such only as belongs to a divinely appointed means of receiving and appropriating a free gift.

Prop. XXVIII. The only warrant of Faith is the Word of God, and that Word is sufficient, not only to entitle every sinner to receive and rest upon Christ for his personal salvation, but to make it his duty to do so without delay.

Prop. XXIX. We are justified by faith only, simply because it is by faith, and by no other grace, that we believe the truth concerning Christ, and rely on Him alone for salvation as He is freely offered to us in the Gospel.

Prop. XXXI. The Father, the Son, and the Holy Spirit are revealed as concurring together in the whole purpose and plan of man's redemption; but as sustaining, each of them, a distinct office, and undertaking a different part of the work, in carrying that purpose and plan into effect.

Prop. XXXIII. The work of the Spirit consists in 'bearing witness to Christ', and applying to men the redemption which He obtained for them, so as to make it effectual for their complete and everlasting salvation.

Prop. XXXIV. Regeneration and Justification are simultaneous; and no man is justified who is not renewed, nor is any man renewed who is not also, and immediately, justified.

There you go. If you want to know more, you'd better read Buchanan!