The Gospel of the Wedding Feast 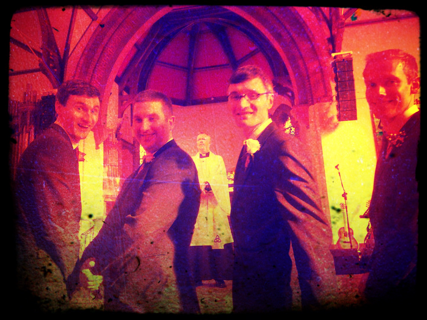 You may have noticed that I've been writing a bit about parables recently. We've had the Good Samaritan, the Loving Father & His Two Lost Sons (a.k.a. the prodigal son), and the Talents. And you may also have noticed that I've been writing about how all these parables show us Christ and His Gospel. Well, here's another parable today, and it shows us the Good News too.

In fact, the whole Bible is a book about a wedding. It starts with a wedding and ends with a wedding and is full of weddings in between - but it's not just that there are lots of weddings in the Bible, but really the whole story is about a wedding. In the Old Testament, the relationship between God and Israel is described as a marriage, and in the New Testament the significance of the whole wedding story is explained: marriage is a great mystery pointing us to the great marriage between Christ and His Church (Eph. 5:22-33). In fact, that's the goal of all creation; that's why God created the world - to have a Bride for His Son. And so the Marriage of the Lamb is the goal of all history, and that's what Jesus is talking about when He says that 'the kingdom of heaven is like a certain king who arranged a marriage for his son.'

Now, as I don't have a lot of time to write, and you likely don't have a lot of time to read, let me skip over those who reject that wedding invitation. Let's even skip over those who finally get invited — "both bad and good" — (although, you can hear more about all these characters in this recent sermon on the parable), And let's just skip straight to the man with the wrong clothes.

What's going on? Why does this man get thrown out of the party? After all, the King has invited everyone — both bad and good — so why doesn't this man get to stay? Is the king suddenly changing his mind and throwing out the bad people? No, it doesn't say that he did anything bad to get himself thrown out. So what does it say?


But when the king came in to see the guests, he saw a man there who did not have on a wedding garment. So he said to him, ‘Friend, how did you come in here without a wedding garment?’ And he was speechless. (Matt. 22:11-12)

It's not his badness that keeps him out, but his clothes. Now, maybe you're feeling a bit sorry for this chap - after all, he's been called into this wedding straight from the street, so he didn't have a chance to go shopping for a new outfit or even go home to change. 'Surely it's not his fault!', you cry.

But, he's the only one who doesn't have the right clothes. Everyone else was called in the same way he was. No one else had time to go shopping or pop home to get changed. And yet, they've all got the proper wedding clothes on!

That's why the man's speechless when the King asks him about it. There's nothing he can say — he's got no valid excuse. He has rejected the King's wedding clothes. He wants to accept the invitation to the party, BUT he only wants to accept it on his own terms. So, he says 'no thanks' to the clothes the King so generously provides, just so he can get into the feast his own way — by his own means.

The only way into the great heavenly Feast is by having God clothe us in garments of salvation. God invites us to the feast, and in Jesus He provides for us the robe of righteousness that we need to come in and enjoy it.

So God not only invites us along, but He does everything that's needed to get us there. But that means relying on Him, instead of relying on ourselves. That means giving up on trying to earn our way in on our own terms and by our own means, and instead resting and relying on what God has done for us in Christ Jesus.

Anyway, if you want to know more about the other characters in the parable, about the destruction of the city and the outer darkness, that proverb at the end, or what it's all got to do with the book of Zephaniah, then have a listen to this sermon.