Some Books to Read on Justification (for everyone) 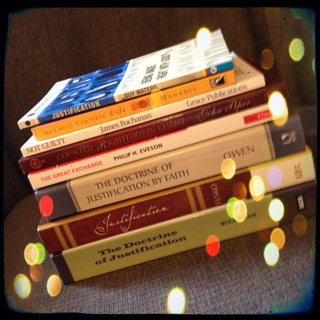 Yesterday I mentioned a great book on the doctrine of Justification, but, undoubtedly, some of you might be put off by the thought of a 500 page 19th Century tome. So today, I've got some more recommendations of good books on justification pitched at all sorts of different levels. So no matter how big or how small your appetite is for good doctrinal reading, there should be something good here for you.

The Cross Centered Life by C.J. Mahaney
This is a very small book, and it's very easy to read. Yet, it remains one of my favourite books of all time.

The Freedom of a Christian by Martin Luther
If you haven't read this, go and read it now!

The Institutes of the Christian Religion, Book 3, Chapters XI-XIX, by John Calvin

Not Guilty by James Buchanan
(An abridged version of The Doctrine of Justification re-written for today's readers)
If you can't cope with the thought of a 500 page 19th Century tome, then at least you can get the jist in this 96 page 20th century version. I'm not sure how easy it is to find, but it's published by Grace Publications and distributed by Evangelical Press, if that helps. (Actually, I've just checked and The Book Depository have it in stock.)

A Christian's Pocket Guide to Justification by Guy Waters
Waters gives a brief but solid introduction to justification and even touches on some recent attempts to undermine this doctrine on which the church stands or falls.

The Great Exchange: Justification by Faith Alone in the Light of Recent Thought by Philip H. Eveson
At just about 200 pages, this book gives a very clear overview of the biblical teaching on justification, the difference between evangelical Protestants and Rome with regard to justification, evaluates N.T. Wright's position, the importance of the doctrine, and its results and implications.

Counted Righteous in Christ by John Piper
Piper's work is a short (125 pages) exegetical book focusing particularly on the imputation of Christ's righteousness. (You can get the whole book as a free PDF from Desiring God here!)

The Doctrine of Justification by James Buchanan
This is the one I recommended yesterday. Probably the most thorough book that exists on the evangelical Protestant doctrine of justification by grace alone through faith alone. Buchanan looks at it both historically (which is excellent for dealing with significant errors and distortions of the doctrine) and theologically. Yesterday I posted his 33/34 Propositions on Justification.

Justification: Understanding the Classic Reformed Doctrine by J.V. Fesko
Fesko is a good, up-to-date companion to Buchanan, dealing with many of the issues that have arisen in the intervening century.
Labels: books doctrine justification recommendations Tenets