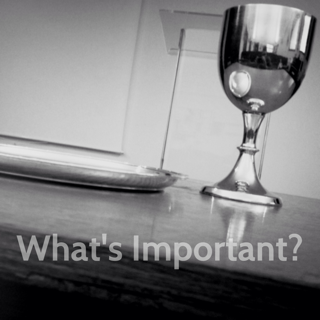 It was the night before the Cross, and yet Jesus spent a lot of it teaching His disciples. In fact, one of the largest chunks of Jesus' teaching to be found in the gospels, the Upper Room Discourse and High Priestly Prayer of John 13-17 was what He taught on that eventful night. Jesus knew what was coming. He had already been warning His disciples. And yet, He chose to spend the last night of His pre-Cross earthly ministry teaching these things. So they must be important things. If they weren't important, they could have waited. And we know that Jesus did wait to teach them some things after His resurrection, and yet other things were revealed to the writers of the New Testament Scriptures. So these things that Jesus taught on Maundy Thursday were very important indeed.

So, what were these important things about which Jesus spent His last night before being put to death talking?  He didn't talk about the most effective evangelistic methods. He didn't talk about church leadership best practice. No, the really important things He talked about were the Lord's Supper, the Trinity and Union with Christ. I'm not going to go through all the Scriptures about that night, but just let me touch briefly on those three important topics of which Jesus spoke.

Sometimes the 21st Century church seems to take the Lord's Supper very lightly. I've heard worship leaders say 'let's just have something to eat and drink together as we worship' with no further explanation  (where as we worship meant 'while we keep on singing'). I've seen communion tables briefly carried in for a two minute slot and then hastily removed. I've heard pastors say that we don't have time for communion today because of the presence of God in the worship (again, they meant singing, and by the way, if we want the presence of Christ, He's promised it at His Table). I've heard of the Table getting moved off to a small midweek service or into house groups to give more time for other things on a Sunday morning. Each one of those is an indication that the Breaking of Bread isn't really held in all that high a regard.

And yet, what did Jesus do 'on the same night in which He was betrayed'? He:

took bread; and when He had given thanks, He broke it and said,“Take, eat; this is My body which is broken for you; do this in remembrance of Me.” In the same manner He also took the cup after supper, saying, “This cup is the new covenant in My blood. This do, as often as you drink it, in remembrance of Me.” (1 Cor. 11:23-25)

For Christ, the Breaking of Bread wasn't an afterthought. He instituted it Himself and did so on His last night before the Cross. And its importance lies in what it is. If we think of Communion as something to be buried under a praise and worship "set", something slot-in-able, something dispensable, or something for us to hide, then that seems more like we're thinking of it as some old ritual. But that's not what it is. 'This is my Body ... This is my blood', that's what Jesus said. This is how Jesus tells us to worship Him. This is how Jesus promises to feed, nourish and sustain us. At the Table we see the gospel proclaimed in visible signs of broken bread and poured out wine. And at the Table we know 'participation in the blood of Christ' and 'participation in the body of Christ' (1 Cor. 10:16). It's not an old ritual to ignore, jazz up, or brush under the carpet; it's a gracious encounter with Christ our Crucified Lord.

I have a pastor friend who likes to wind me up by telling me that the doctrine of the Trinity isn't all that important. And even though he does exactly the same thing each time, and I know fine well he's only winding me up, his efforts succeed. You see, we live in an age where we don't really put much emphasis on the Trinity. If a Oneness preacher has popular TV shows and tops the bestseller list, many people aren't the least bit worried about his (non-)Trinitarian heresy. I know of people who, while saying they believe in the Trinity, are perfectly happy to attend a Oneness church!

Yet, unlike us, for Jesus the Trinity was of vital importance. He didn't think of the Trinity as some complicated advanced level theology that would only matter to experts, but the very substance of Christianity. And that's what He spent His last night before the Cross teaching.

Even as He prays, He teaches us that the Christian life is a life in fellowship with the Trinity: 'this is eternal life, that they may know You, the only true God, and Jesus Christ whom You have sent' (John 17:3). Eternal life isn't about a location or a duration, but about loving fellowship with the Father and the Son, in the Spirit. 'Wait, hang on a minute', you say, 'John 17:3 doesn't say anything about the Spirit!' True, it doesn't. But by the time He's got that far, Jesus has already told His disciples that the Father will send the Spirit (John 14:16-17) and that, in the coming of the Spirit, Jesus will come to them (John 14:18) and that when Jesus comes to them, the Father too will come and make His home with them (John 14:23). So, He's already told them that they'll know the Father and the Son in the Spirit. And now He declares that this knowing the Father and the Son in the Spirit, this being drawn into the love and fellowship of the Trinity, is the very nature of eternal life. This is the Christian life: a life in loving fellowship with the Father, Son and Holy Spirit.

So, if we think eternal life is important, how could we not recognise the importance of the Trinity? The Trinity isn't some extra hard theology about God. No, the Trinity is the very identity of our God.

How often do we speak about union with Christ? Again, it's one of the themes of Jesus' teaching on that last night before the Cross. John 15 starts off with a nice passage about us being branches in Christ the Vine. It's only in union with Christ that we bear fruit; it's the Vine that produces the fruit, not the branches themselves. But then the chapter goes on to a bit that's not so nice, all about the hatred of the world and persecution. Yet still Jesus is talking about our union with Him. We bear fruit in union with Christ and we suffer in union with Christ. If we want to bear true and lasting fruit, we won't be able to do it by our own effort or our own goodness, but only through our union with Christ. We rely on the One to whom we've been united. And likewise in suffering we rely on Him, knowing that our only comfort is found in Christ who is not far from us, but united to us. Whether in suffering or in fruitfulness, knowing that we're united to Christ is of vital importance for the Christian life.

So, there you go. Three things Jesus spent the last night before the Cross speaking about with His disciples. Three things that were important enough to Jesus to spend that night on. May what's important to Him be always recognised as important by us. The Lord's Supper, the Trinity, and Union with Christ really all are good news.
Labels: church Jesus ministry New Testament sacraments Trinity union with Christ