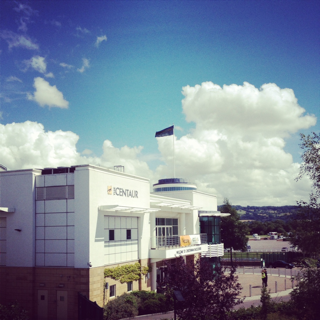 I'm going to write about the whole of Sunday at Ablaze this year in one go, as the morning and evening sermons were really two parts of a whole. Emmanuel Mbakwe began the day by reading Psalm 24 and then welcoming foreign guests, one of whom was Pastor Timothy Jack, the National Leader of the Apostolic Church in Australia, who opened in prayer.

Jonathan Morgans brought prophetical ministry in the morning meeting. The Lord spoke saying, I am the King of Kings; I am a mighty Warrior for you. And today in this place you will know me as those things, but you will hear me sing over you. Whether you are close or far away; whether you are broken, addicted, or right in my plan and purpose for your life, I want you to hear me sing. Wherever you are I want you to know that the Mighty Warrior sings a love song over you.

Sunday's preacher was Gerard Kelly of the Bless Network, which trains young people to be involved in God's mission across Europe. He preached from Luke 15:11-24 on the parable of the Prodigal Son, saying that there is no more beautiful picture in the whole of Scripture of restoration and recovery. The centre of the story is the  Father's embrace of the lost son. In fact, it's not the son who's prodigal, but the Father, as prodigal means being lavishly extravagant. He pointed us to Paul's prayer in Eph. 3:18-19 where Paul prays that the Christians may know the lavish love of Jesus.

Gerard Kelly broke the story into four elements, which he sees as not only the elements of this story, but of the greater narrative of Scripture (1. Beautiful, 2. Broken, 3. Forgiven, 4. Invited.)

First, beautiful. We are created in the image of God and in Genesis God declared the creation of man to be “very good”. Psalm 139 tells us that we are “fearfully and wonderfully made”. God has plans for people.

Second, broken (vv.13-19). Coming to terms with our brokenness is part of what the gospel motivates us to do. This doesn't just involve desperation, but also memory. The son remembers that he's never seen any of his father's workers being treated the way he's being treated. The memory of the generosity of his father is what gives him the courage to go home. No one is so beautiful that no part of them is broken. No one is so broken that the image of God is lost.

The finished work of Christ means that God has taken the initiative; in Christ God has forgiven us. It's a done deal and God is waiting with His arms wide open. If you don't have the Cross, you don't have Christianity. There has to be an event from outside of us that breaks into who we are. We cannot lose the Cross as the centre.

Finally, invited (vv.22-24). We have been invited to a party and this party is not waiting to begin. It has already begun in the resurrection of Christ.

So there you go, that was a little taste of Sunday at AblazeUK.