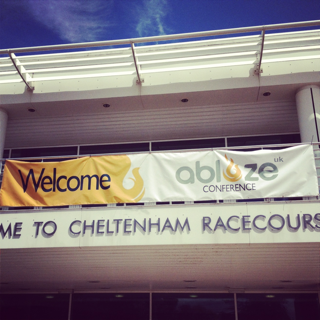 AblazeUK kicked off tonight with this year's theme of “Total Recovery”. And so I'm kicking off my convention summaries. (Let me just explain what I mean by that so you know what to expect. over the next few days I'll try to report on the convention meetings, so what you'll get is basically a summary of the sermon and any prophetical ministry. some of it might be the exact words used, other bits will be summary of what was said – it just depends on my notes from the meeting.)

So here we go with the Saturday evening meeting. Olivia Crolla led us in worship as we sang the praise of Jesus, whose blood and righteousness is our only hope. Sam brought prophetical ministry, telling us that the Lord sees our weakness, yet wants us to know His strength to pursue, overtake and recover. This is not a period of retreat to sit back, but a period to recover what the enemy has taken. It is a time to plant new assemblies. It is a time to recover the backslider.

God spoke to leaders saying that He has not finished with you yet, but to rely on your God and He will provide the ability to pursue, overtake and recover. God also spoke to the youth saying He would bring revelation to the young and use them in their generation. The prophecy finished off by saying that God would perform signs and wonders in the convention and bring healing, that this would be a time of recovery.

The preacher for the evening was Pastor Phelim Doherty of the Londonderry assembly. Phelim preached from 1 Corinthians 2:1-12, telling us that Total Recovery is not an aspiration or a goal, but a fact – it's something that has already been accomplished for us (v.2). Human wisdom, the spirit of the world, elevates man and speaks of what man is to do. But the Spirit of God elevates Christ and what He has done. We are the “totally recovered” because Christ totally recovered us on the Cross.

Our faith isn't in ourselves or what we're doing, but in Christ and want He's done, and that faith is by grace. So often we want to know when God's going to move – but He already has moved! He has moved in the incarnation, life, death, resurrection and ascension of Christ.

Rest comes when your hope moves off what you're going to do for God and onto Christ and what He's done for you.

So, there you go – that was Saturday night at AblazeUK.

Oh, and by the way, someone won the first book in the competition. If you want to win tomorrow, I'll be giving away The Good God after the morning service and A New Name after the evening service.