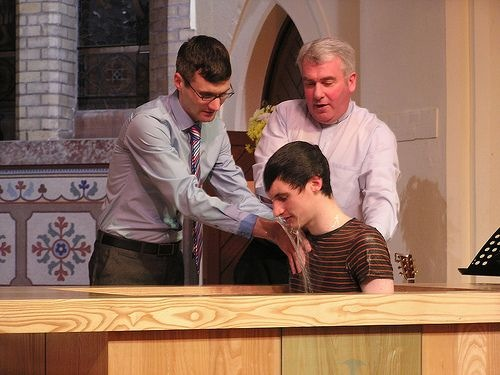 This week’s Wednesday Word is Baptism, so what is it and why does it matter? The seventh Tenet of the Apostolic Church says that we believe in ‘the Sacraments of Baptism by immersion and of the Lord's Supper.’ So that gives us two things about baptism to start off with: 1) it’s a sacrament, 2) it’s by immersion. We’ll start with those and then go on and see what it’s got to do with Union with Christ, the Trinity, God’s Word, and Testimony.

So then, what’s a sacrament? As children we often learn the rhyme that a sacrament is ‘an outward seal and sign of an inward work divine’ instituted by Christ. (It was Jesus Himself who told His disciples to baptise and to celebrate the Lord’s Supper.) The Heidelberg Catechism (Q. 66) explains this a bit more:

The Sacraments are visible holy signs and seals appointed of God for this end, that by the use thereof He may the more fully declare and seal to us the promise of the Gospel: namely, that of free grace, He grants us the forgiveness of sins and everlasting life for the sake of the one sacrifice of Christ accomplished on the cross.


The other thing we saw about baptism was that it’s by immersion. In fact, the Greek word translated ‘baptise’ literally means to immerse or to dip. So, to baptise someone is to put them completely under the water and then bring them back up out again. After Jesus’ baptism, ‘he came up out of the water’ (Mark 1:10; ESV). When Philip baptised the Ethiopian eunuch, ‘both Philip and the eunuch went down into the water, and he baptized him. [and] they came up out of the water’ (Acts 8:38-39). The drinking water in the chariot was not enough, rather they had to go down into the water. So sprinkling wan’t an option; immersion was required for baptism.


Why is baptism by immersion? Well, it’s all to do with the sign – what is baptism a sign of? In the Bible, water is very often a symbol of God’s judgment. In the days of Noah, God judged the earth by sending a flood (Gen. 7:6-24). When the Egyptians tried to chase the Israelites after they had let them go from slavery in Egypt, God destroyed the Egyptian army in the Red Sea (Ex. 14:26-29). When Jonah ran in the opposite direction from the one God had told him to go and disobeyed God’s command, he was thrown overboard into the sea by the sailors in judgment (Jonah 1:7-16). In all those cases judgment comes through the waters. Yet, in all those cases God saves His people through the waters of judgement.

And so the waters of baptism speak to us of the death and judgment we deserve from God for our sin, and coming up out of the water signifies that, only through Christ’s merits and our union with Him in His death and resurrection, we have passed safely through God’s judgement.


It’s not just that we’re dead, buried and raised though; it’s that we’re united to Christ in His death and resurrection. Colossians 2:12 tells us that we were ‘buried with Him in baptism, in which you also were raised with Him through faith in the working of God, who raised Him from the dead.’ Romans 6:3-4 similarly teaches:

Or do you not know that as many of us as were baptized into Christ Jesus were baptized into His death? Therefore we were buried with Him through baptism into death, that just as Christ was raised from the dead by the glory of the Father, even so we also should walk in newness of life.

Therefore baptism is a sign of our union with Christ in His death, burial and resurrection. Coming up out of the water symbolizes our being raised with Christ to newness of life. And so baptism speaks to us strongly of the fact that ‘I have been crucified with Christ; it is no longer I who live, but Christ lives in me; and the life which I now live in the flesh I live by faith in the Son of God, who loved me and gave Himself for me’ (Gal. 2:20).

Baptised into the Trinity


And baptism doesn’t only involve an action, but also the Word. Baptism differs from simply being dunked under water through the word that goes with it: ‘in the name of the Father and of the Son and of the Holy Spirit’ (Matt. 28:19). So, in baptism our acceptance and welcome by the Triune God is proclaimed. Through our union with Christ in His death and resurrection, we have been welcomed into the family of God as sons in the Son, and brought into the blessings of fellowship and communion with the Holy Trinity. In baptism a new name is declared over us – the name of our new, heavenly family.

God’s Word to Us

Sometimes we’re tempted to think of baptism as our word to God – as us showing Him our commitment. But that’s not really what it’s about at all! Quite the contrary – baptism is God’s Word to us. In baptism God is speaking to us about Christ’s death and resurrection for us, and about our union with Him. And that means we don’t have to wait until we think we’re good enough. Not at all! For it’s not our testimony to God, but His testimony to us. Baptism is His word to us about how He’s saved us from judgement and brought us to life in the death and resurrection of Jesus. And so through God’s Word to us in baptism the Holy Spirit strengthens our faith through the clear representation of our union with Christ in death and resurrection and strengthens us for our walk in newness of life.

God’s Word to the World


Have you ever noticed how a baptismal service is often also such a great evangelistic occasion? Non-Christians come along and they see a powerful picture of the gospel of Jesus Christ and hear the gospel proclaimed as well. You see, God isn’t only speaking to the person being baptised, but also to all who witness the baptism. For the Christians who witness a baptism, it reminds us that God has done the same thing for us, uniting us to Christ in His death and resurrection, and so further strengthens our faith. For the non-Christians who witness a baptism, they hear the gospel in the preaching and see the gospel demonstrated in the baptism. And to everyone, baptism speaks a word about a new reality – in baptism everyone sees that the one baptised no longer belongs to the old life in this world, but is now a member of the family of the Triune God.
Labels: Apostolic Church church doctrine ministry sacraments Tenets theology Wednesday Words