The Word of God 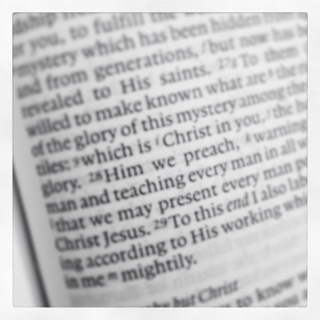 So, we don’t have three different words; they’re all saying the same thing. The threefold Word is a unified Word that comes to us in three forms.

These days we tend not to talk like that so much about preaching. Instead we seem to talk of ‘explaining the Scripture’, ‘sharing what the Lord has laid on your heart’ or something else that sounds a lot less than ‘the Word of the Lord’. Yet, in the past, Christians weren’t afraid to talk of preaching as the Word of God. Perhaps most famously, the Second Helvetic Confession declares that ‘the preaching of the Word of God is the Word of God.’ That might sound rather bold and daring to us today, but it wasn’t at all for Reformation times. Luther said that ‘the office is not the pastor’s or preacher’s but God’s, and the word which he preaches is likewise not the pastor’s or preacher’s, but God’s.’ Calvin put it like this: ‘When a man has climbed up into the pulpit it is so that God may speak to us by the mouth of the man.’

How could they say such things? Well, because that’s what the Bible says. Think about Matthew 10:40 where Jesus says to His disciples, ‘he who receives you, receives me, and he who receives me receives Him who sent me.’ Jesus isn’t simply talking about hospitality. If you’re not sure, then flick over to a parallel in Luke 10:16 – ‘He who hears you hears me, he who rejects you rejects me, and he who rejects me rejects Him who sent me.’ People who reject the words of Christ’s messengers (that’s you and me when we share the gospel with them) are actually rejecting Christ. Those who receive our message don’t just receive a message about Christ, they receive Christ.

So does that mean that every time someone stands up in a pulpit their words are somehow magically transformed into God’s words? Is it some sort of oral transubstantiation? Not at all. It’s easy enough for someone to get up in a pulpit on a Sunday morning and speak nothing but their own words. And it’s also an uncomplicated matter for any of us to speak the Word of God on a Wednesday afternoon to a friend over coffee. It’s not about location, formality or time; it’s about proclaiming Christ biblically. That’s how we know our word is God’s Word, when we proclaim Christ biblically. Anything else isn’t the Word of God.


(By the way, lest anyone try to dismiss the threefold Word as ‘Barthian’, Luther taught it, as did D.P. Williams. Just because Barth said something doesn’t make it wrong!)
Labels: Bible Calvin D.P. Williams Jesus Luther New Testament preaching theology Wednesday Words Word