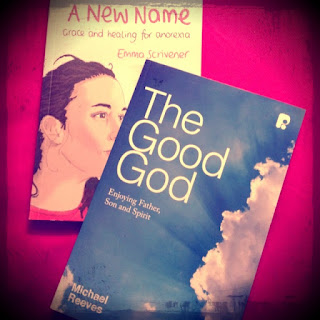 I know we’re well into January now, but I hope you’ll indulge this quick recap of 2012. I want to point out a couple of excellent books to read, a song to sing, and something to watch, as well as a quick blog recap.

Having had a bit of unexpected time due to the snow, I’ve set up a Facebook page for the blog, so if you’d like to find out about new posts via Facebook, you can like the Apostolic Theology Facebook page. (And amazingly, quite a few people have liked it already, so thanks for that too.)

Favourite Books of 2012:
Well, I had hoped to write proper reviews of these before now, and will still hopefully get round to it at some point, but I didn't want to delay any longer in telling you about these great books.

The Good God: Enjoying Father, Son and Spirit by Michael Reeves. This is an amazing book. Not only my favourite of 2012, but possibly my favourite Christian book ever. In fact, it’s so good that we gave a copy to everyone in the Leeds assembly (and more than one person got a copy of The Good God as a Christmas present from me this year as well). If you think of the Trinity as a mathematical problem or something complicated for the theologians to think about, then read this book. Reeves shows the beauty of the Trinity - Father, Son and Holy Spirit united in love that overflows to us. As Tim Chester says on the back cover: 'If you want to enjoy God more then read this book.'

A New Name by Emma Scrivener. The subtitle of Emma’s book (‘Grace and Healing for Anorexia’) might not jump out at you as a book to put on the top of your reading pile, but ignore that and move this book up to the top of the pile (along with The Good God). I made the mistake of not getting round to reading it for a while, but in the meantime leant it to my sister who was visiting for a few days and she couldn’t put it down. Brutally honest, yet beautiful, you may need to be prepared for some tears while reading this one. This is Emma's testimony, but it doesn't fall into stereotypical testimony patterns. Emma is a wonderful writer with a gripping story to tell, but what shines through is the first word of the subtitle: grace. Yes, it is about anorexia; but at the same time it's not. It's about redemption. So don't think it's a niche book, just read it.

Favourite New Worship Song of 2012:
I have to admit, I’m not really on the pulse with the latest worship songs. But there is one I do know which was both written in 2012 and stands out from the crowd: Fountain of Goodness by Olly Knight and Mike Reeves. Yes, that’s the same Mike Reeves who wrote The Good God, and this song is also about the Trinity. And that’s already something that sets this song apart: how many fully Trinitarian modern worship songs do we really sing? ….

Something Very Good to Watch from 2012:
If you haven’t seen 321 yet, then watch it! It’s good; it’s the gospel! We showed it in church at our Carol Service and I know some other assemblies have used it as well. So, if you still haven’t seen it, here it is.


Events of 2012:
There have been lots of them! But I shall not bore you with such tedium. The one event I will mention was that I was called and ordained as a teacher in the Body of Christ. And for the ordination, we had the privilege of having Craig Hopkins from the Bridgend assembly come up to Leeds to preach.

Top Post of 2012: Pentecost is Trinitarian
A proper understanding of the Baptism in the Holy Spirit needs to be a Trinitarian one. I’m quite amazed that a post that uses the word perichoresis was read 477 times! (Don’t worry, I do explain what perichoresis is.) For another post from 2012 on the importance of the Trinity see: What’s so big about the Trinity?

A Few Other Popular Posts of 2012:
AblazeUK posts: Posts from Ablaze are always among the most popular on the blog. I nearly didn’t blog from Ablaze this year, but on the first night a Welsh pastor from Scotland asked me about it, so I did after all. Here’s the final post: Some Post-Ablaze Reflections.

Most Controversial Posts of 2012: Bad Theology Damages People (But Jesus is Good News) & What the Bible Says About Homosexuality. The controversy on one was only to be expected, but on the other completely unexpected. You can guess which was which :)

Some Favourite Posts of 2012:
A Series on the Heart of Apostolic Theology: End or the Means; Eternal Purpose; Fullness

Thanks again for reading! (Oh, and don't forget, you can like Apostolic Theology on Facebook if you like.) Now back to our regular programming.
Labels: books recommendations