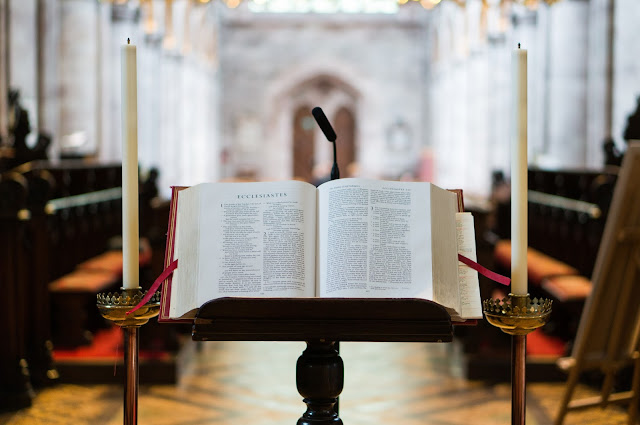 Evangelicals sometimes speak of themselves as ‘Bible-believing Christians’, and yet, you’re likely to hear much less of the Bible read in a 21st century evangelical church service than you would in many other traditions. In liturgical worship, you’ll hear at least four Scripture readings on a Sunday morning – one from the Old Testament, one from the Psalms, one from the New Testament epistles, and one from the Gospels – and probably sing a few portions of Scripture on top of that too. But, more and more frequently, evangelical services can be found with the only Scripture reading being whatever the preacher decides to read before the sermon (if he decides to read a passage of Scripture at all!). Now, clearly this is not the case in all evangelical churches (so don’t mistake me for suggesting that it is), but it is becoming more and more and more common as a particular form of worship/liturgy sweeps over more and more of evangelicalism. And, because many evangelical churches don’t have a written-down liturgy, it’s easy not to notice subtle changes to our worship like this.


A Practical Reason for Reading More Scripture in Church

Now, some people will argue that there’s no need to read so much Scripture in a church service. After all, people should be reading the Bible for themselves during the week. And, in a perfect world, maybe we could work on that assumption. But, alas, we don’t live in a perfect world, and so we can’t assume that a hundred percent of the Sunday congregation are reading the Bible every day of the week.

There are many reasons why not everyone in the congregation is reading the Bible each day, and why some go from Sunday to Sunday without having any other Scriptural input. For a start, most of us probably hope to see people who don’t yet trust in Christ in church on Sundays to hear the gospel, yet many of them won’t see any reason to read the Bible in-between times. There may also be Christians in the congregation who have been kept from reading due to sickness, stress, disorganisation, or even by a particular sin. (As my old Crusaders leader used to say to everyone when he gave them a Bible, ‘Sin will keep you from this book, but this book will keep you from sin.’) Scripture readings on a Sunday in church make sure that those who aren’t reading the Bible each day hear God’s Word read at least once a week.

But it’s not only that some people aren’t reading the Bible during the week; there are also people who cannot read the Bible during the week. We often forget that, as the official literacy rate in the UK is 99%. Yet literacy in this country is defined as anyone over the age of 15 who has completed five or more years of schooling. Just think what a P5 pupil can read by themselves (that’s Year 4 in English terms). When I was in the sixth form, I used to help in our school’s preparatory department and one of my tasks was to listen to the pupil’s reading. And Prep 5 pupils were still reading children’s books and still needed help with words, and that was in a very good prep. So even among the 99% who are officially literate, there are those who simply aren’t able to read the Bible by themselves. Plus, if only 99% of the population are literate, that still leaves 1% who aren’t at all. That means there are about 650, 000 people who are officially illiterate in the UK. That’s more the population of Manchester, and nearly as many as the population of Leeds!

In fact, England (not the UK as a whole) has the lowest literacy rate in the developed world, and even 1 in 10 English university graduates has poor literacy! (Interestingly, Northern Ireland has a much lower rate of poor literacy than England.) I’m sure most pastors who have been involved in one-to-one discipleship have discovered just how often they encounter people who struggle with reading. According to the National Literacy Trust, 1 in 6 people in the UK struggle to read: that means that in the average sized evangelical congregation (77 people), there will typically be 13 people who struggle to read.

Illiteracy is not a new problem. In the days of the early church, literacy rates were only about 5-10%. So most people in the church wouldn’t have been able to read or write. And even if they could, very few indeed would have been able to afford a hand-written copy of Scripture! So, most Christians in the early church simply couldn’t read the Bible at home each day. And what was the solution? The solution was reading lots of the Bible in church together on a Sunday. As Justin Martyr (writing around AD 155) tells us in his description of early Christian worship, ‘the memoirs of the apostles or the writings of the prophets are read, as long as time permits.’ In other words, they spent as much time as possible on a Sunday morning at the Breaking of Bread reading from the Bible.


1. Christ is present in His Word.

The Living, Crucified, and Risen Word – the Lord Jesus Christ – is present in His Word, speaks by His Word, and works through His Word. And so, as we listen to the Scriptures read, we listen to Christ the Head speaking to His Body. Giving time to the reading of Scripture in the service means giving time to Jesus for Him to speak into hearts and lives, and for Him to work powerfully among His people by His Word. Giving time to reading the Bible in the Sunday service means giving time for people to encounter the living Saviour who is present in His Word.

2. Reading the Word together as the church reminds us that Scripture is not given to us as independent individuals, but as members of the Body of Christ.

The Lord has saved us and gathered us together into one Body – the Church. And He gives us the precious gift of His Word, not as independent individuals, but as an inter-dependent Body – as the Church. Scripture is not a private revelation, but a very public one. ‘No prophecy of Scripture is of any private interpretation’ (1 Pet. 1:20). Whether we’re reading together on a Sunday, or by ourselves at home on a Tuesday, we still read God’s Word as part of the Body of Christ, in fellowship with the communion of the saints.

3. The Word read in the context of the Breaking of Bread service reminds us that all Scripture speaks to us of Christ, the Lamb of God who takes away the sin of the world.

As with everything that happens on a Sunday morning in church, the Scripture readings are in the context of the Breaking of Bread, and in that context we must read the Scripture in its proper way, with Christ Himself as the proper interpretive key. And so, reading the Scriptures together as we gather around the Lord’s Table teaches us to see ‘in all the Scriptures the things concerning [Christ]’ (Luke 24:27).

4. Hearing the Scriptures read systematically in church ensures that people encounter the whole counsel of God, and not just those portions of God’s Word which they like best or find most ‘useful’.

If we’re very honest, we’ll admit that it’s easy to fall into patterns of re-reading certain portions of Scripture at the expense of others. Perhaps we love the accounts of Jesus’ life and ministry in the Gospels, or find constant encouragement and comfort in the Psalms, or thrive on reading Paul’s epistles, but find Numbers or the genealogies of the first part of 1 Chronicles, or the bits between the first and last chapters of Job much more difficult. The temptation when we read Scripture alone can be to focus on the bits we find easiest, most useful, or that we simply like best. However, a systematic reading of the Scriptures together as a church should expose us not only to our personal preferences, but to the whole counsel of God. (I’ll write another post about how we can ensure such a systematic reading soon.)

In my assembly we read quite a bit of Scripture in the services. When I first came, 7 years ago, we introduced and Old Testament Reading and New Testament Reading on a Sunday evening. When the Sunday evening service came to end, we moved the two readings to the morning. And then eventually moved to three readings (Old Testament, Epistle, and Gospel). Then we started singing a Psalm as well. And finally, when another elder took responsibility for the Scripture readings, he took us to the full four (Old Testament, Psalm, Epistle, and Gospel) plus our sung Psalm. On top of that there’ll be a reading with the sermon, often a Scriptural call to worship at the beginning of the service, Scriptures around the Lord’s Table, the Lord’s Prayer, and a Biblical benediction. Recently we’ve even started having a memory verse. I’m not saying anyone else has to do it the way we do it in Leeds. But I just want to encourage you that reading a good amount of Scripture in church can be done, and that it is a good thing for God’s people.