Big Cup, Little Cups or Mix it Up: 'Drink ye all of it' 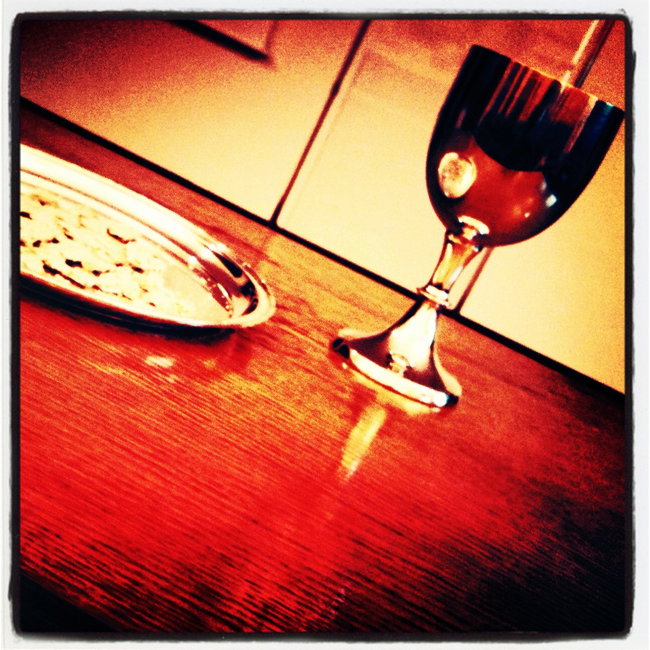 Here's a post I started writing rather a long time ago, but have always avoided finishing or posting, up until now. So, with a deep breath, here goes...

Recently I was reflecting on how I'd been (mistakenly) called 'high church' after a Breaking of Bread. And that has drawn me on today to think about another possible reason for such thinking: the administration of the Cup.

What on earth am I on about? Well, how do you drink at Communion? That may well seem like a very strange question, after all, most of us have probably always taken communion the same way. But different churches drink in different ways. And in Leeds (keeping with the tradition of the Apostolic Church) we drink out of a chalice: one common cup for the whole assembly. Now, in big meetings you might need a few chalices, but the principle remains of sharing in a common cup.

Not every church drinks from a common cup though. Many evangelical churches have little individual glasses, so everyone drinks from their own cup. And still others (something which is becoming increasingly common) have a common cup, but no one drinks from it; instead everyone's piece of bread is dipped in the wine and so each communicant takes the two emblems together (this is called intinction).

Now, at this point, you're probably wondering, does this matter at all? Well, it seems to, because people often make "helpful comments" when they realise we still use a chalice in our church. You know what I mean by helpful comments - things along the lines of 'You know you can get little individual cups nowadays; it's much easier!' (Translation: Why on earth are you so old-fashioned and out-of-touch as to use a chalice?! Change it at once!)

Now, of course I know that you can get little individual cups (although I completely disagree when people say either that it's easier - it just isn't - or that it's more hygienic - it's been scientifically proven that, of the three forms of taking communion, the chalice is the most hygienic - there are much more germs on finger tips than lips!). But despite knowing that they exist, we still don't use them, and purposely so. You see, we don't use a chalice simply because we want to be old-fashioned or stubbornly cling to an old tradition - we have a much more important reason than that.

The reason we use a chalice - a common cup - is because that's part of the biblical sacrament of the Lord's Supper. On the night of the last supper, Jesus 'took the cup' (1 Cor. 11:25). Throughout that passage, and likewise in Matthew 26, Mark 14 and Luke 22, the cup is always referred to in the singular. So the Bible specifies that Jesus took one cup and that the disciples all drank from one cup. And along with that Jesus said 'This do, as often as you drink it, in remembrance of Me' (1 Cor. 11:25). We are to do what He does there with His disciples, which is to share one cup together.

That's the exegetical reason we use one cup, but that goes together with the theological reason. Why did Jesus give them one cup to share? After all, they would all have had their own cup in front of them as part of the meal. Why didn't he bless all the individual cups and tell them all to drink from their own cups? The answer is found in the very nature of what the sacrament is.

The Breaking of Bread is a participation in the body and blood of our Lord Jesus Christ (1 Cor. 10:16). As we share together in bread and wine, we all feed on the same Saviour. It is the same Jesus who strengthens and sustains each of us. It is the same Jesus to whom we are all united by faith and in whom we grow.

And the Breaking of Bread is also a remembrance of the great once-and-for-all sacrifice of Jesus in our place. It's the same Jesus who shed His blood for each of us, and through His death for us, we each partake of the same blessings in Him.

The Breaking of Bread isn't a celebration of an individualistic salvation, but of the common Saviour in whom we share. It's a meal of the Church, where we come together as one Body, not because of anything we have done, but all because of our Heavenly Head - the Lord Jesus - and what He has accomplished for us. 1 Corinthians 10:17 stresses the close connection between the unity of the Body and the sacrament: 'For we, though many, are one bread and one body; for we all partake of that one bread.'

At the Table, we have communion together in the One Christ, and that's why it's important that we share together in one bread and one cup.

To be honest, little cups have already gone out of fashion somewhat. The chalice has made something of a come-back (although, to be fair, the majority of all evangelical churches in this country have always continued to use the chalice, as Anglicans make up the majority of evangelicals, and Anglicans, by law, must use a chalice). But the fashion for the reemergence of the chalice has tended to go in the direction of a third alternative: neither drinking together from one cup, nor drinking separately from individual cups, but rather not drinking at all. Intinction (dipping the bread in the cup) took off during the swine flu epidemic a few years ago, and seems to be what all the cool churches are doing these days.

So is intinction the way forward? After all, for many churches it's a return to the one cup: an end to the individualism of the little cups. So couldn't we all find unity in intinction?

Well, although it might seem to have a lot going for it, intinction also has one major lack: no one drinks. Christ's command was 'This do, as often as you drink it' (1 Cor. 11:25). Our proclamation of the Lord's death is 'as often as [we] ... drink this cup' (1 Cor. 11:26). And the following verses on examining ourselves before coming to the Table speak repeatedly of drinking (1 Cor. 11:27-29). Christ's detailed instructions for the sacrament of the Lord's Supper involve both eating bread and drinking of the cup, and so intinction, in which no one drinks, is contrary to the instructions for the sacrament.

And this isn't a new or novel argument. In fact, the very first mention of intinction in history was a rejection of the practice as inconsistent with the Scriptural instructions:


But their practice of giving the people intincted Eucharist for the fulfillment of communion is not received from the gospel witness, where, when he gave the apostles his body and blood, giving the bread separately and the chalice separately is recorded. (Julius I, AD 340)

Yet this isn't the only problem with intinction, for it also joins the body and blood, which are set forth in the sacrament separately. In other words, in the Lord's Supper we first eat bread, as Christ's body broken for us, and then drink of the cup, as His blood shed for us, and this proclaims His death - for it is by death that the blood was separated from the body. But by soaking the bread in the wine, we set forth instead the blood in the body, rather than poured out from it in death. So intinction is both contrary to Christ's instructions in Scripture for the sacrament and also fails to set forth clearly the Lord's death.


Why have I been slow to write about such things?

As I said at the beginning, I've been holding off on posting this for a few years now. Despite the fact that this is the one doctrine where I am a properly, peer-reviewed, published theologian, I tend to hold off on writing publicly about the Lord's Supper. Let me just quote the reason for my reluctance from when I brought it up in a previous post (for the same still applies):


Now, the reason I've been very reluctant to write about this up to now, is that I don't want to be misunderstood as being critical of others. That's not my intent. I don't want to be sweeping in, wagging my finger and saying 'Tut, tut'. What I do want to to do is make an earnest plea for us all to keep our eyes on Jesus Christ and His death in our place as we come to the Table, so that we might all loudly, confidently and clearly proclaim the Lord's death with each and every Communion, and there feed on Him our hearts by faith with thanksgiving.

I know many of my friends and colleagues have moved away from the common cup, and so out of respect and love for them I've avoided writing about the subject. Yet, I've also realised that, by refusing to write about why I still use the chalice, I only end up feeding the notion that it's nothing more than an old-fashioned tradition. So I've written - not to be contentious, but to show the biblical and theological rationale for what I do.

For some more reflection on the Breaking of Bread have a look at these posts:


And for something a bit more rigorous, have a look at the middle part of this paper (pages 6-13):
Finally, let me leave you with some words from Cyprian in what is the oldest treatise that has survived specifically on the theology of the Lord's Supper:


If this is commanded by the Lord, and confirmed and handed on by his apostle, we should do that which the Lord also did as often as we will drink in remembrance of the Lord. We find that what he has commanded is only observed by us if we do expressly those things that the Lord did. (Cyprian of Carthage, The Nature of Holy Communion, 10.2)