The Words of Institution: Are We Really Breaking Bread? 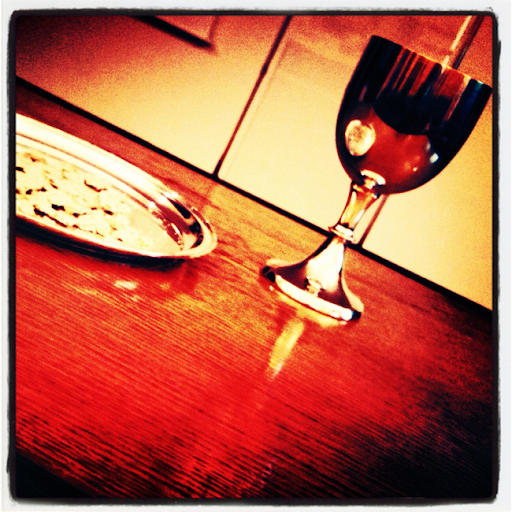 Following on from yesterday's satire, there's something that's been on my mind for a while now, but which I've been reluctant to write about up to now. One of the distinctives of the Apostolic Church (it's not something unique to us, but it is quite different from many forms of evangelicalism) is that our main service each Lord's Day is the Breaking of Bread. Yet, despite the fact that it's still our main service, there have been very significant changes in a lot of places in our practice of the Lord's Supper in recent years. This isn't something completely new - some of the changes started creeping in maybe two decades or so ago - but it's something that does seem to have been accelerating more recently and to have reached a crucial point in many places. And it's this crucial point that has convinced me to abandon my reluctance to mention the issue. So, the crucial point is this: I'm worried that in many places, people aren't getting the Lord's Supper at all without us even noticing.

No, I'm not talking about elders missing people out as they distribute the bread and cup. At least in that case the person realises straight away that they're not getting the sacrament, and the situation can be resolved. I'm talking about lots of people thinking they're getting it, but not actually getting it at all.

You see, it's like this, cream crackers and Ribena, or even bread and wine, during a Sunday morning service do not a sacrament make. As good credo-baptists we're quite particular about that when it comes to one sacrament; we know that water in church does not a baptism make. And the same thing goes for Lord's Supper.

Let's just stick with baptism for a moment as that might be a bit clearer for us. Water in church isn't enough, so what actually is necessary for baptism. For Credo-baptists (as all Apostolics are) that's easy to answer:

Just as water in church isn't enough for baptism, so too bread and wine in church aren't enough for Holy Communion. So what actually is necessary. Well, have a look in 1 Corinthians 11 where the Bible sets it out:


For I received from the Lord that which I also delivered to you: that the Lord Jesus on the same night in which He was betrayed took bread; and when He had given thanks, He broke it and said,“Take, eat; this is My body which is broken for you; do this in remembrance of Me.” In the same manner He also took the cup after supper, saying, “This cup is the new covenant in My blood. This do, as often as you drink it, in remembrance of Me.” For as often as you eat this bread and drink this cup, you proclaim the Lord’s death till He comes. (1 Cor. 23-26)

Those words are probably very familiar. I hope you hear them (or at least part of them) every Sunday morning at the Table (and I'll explain that hope, which is the most important part of this post, in a moment). Here we are told what Jesus did and what He commands us to do in the Breaking of Bread.
So in this list we can see that, boiled down to its bare basics, the Breaking of Bread involves 8 things. This isn't a particular liturgy or order of service that can be adapted from time to time; this is just the very bare bones of what makes the Lord's Supper.

My great concern, and the reason that I'm breaking my silence to write, is not one or two of these 8 elements are sometimes a bit unclear. No, my great concern is that I've been in some churches of late where only 2 (or perhaps more precisely 1 1/2) of the elements remain: eating the bread and drinking wine. (1 1/2 because in none of the places where this has happened have we drunk of the cup, but rather we've all separately as individuals drunk some wine/Ribena.)

The first time I encountered this was as a university student. There was only one Pentecostal church in the city, a long way away from the colleges of the University (and, I should add here, it wasn't an Apostolic Church, but one of another Pentecostal denomination). On one of my first Sundays in town the (visiting) pastor got up during the praise and worship and said. 'We're just all going to have something to eat and drink together while we worship', and told people just to come forward and grab something off the (set-off to the side) table when they felt like it. That was "Communion". Even as a rather naive 18 year old who knew very little of the theology of the Lord's Supper, I could recognise straight away that that wasn't a Lord's Supper.

Yet, now such eucharistic minimalism - to the extent that it's not really a Lord's Supper at all - seems to be gradually creeping in among our churches. I'm not saying that it's widespread, frequent or common. Just that I've noticed it a few times, and, given how other trends have spread in changing our Communions, I want to say something before it does spread. And my major concerns are items 4 and 7 on the list - the Words of Institution.

The Scripture tells us that, at the Lord's Table, we 'proclaim the Lord's death until He comes' (1 Cor. 11:26). That proclamation goes in four directions: we proclaim Christ's death 1) to ourselves, 2) to one another, 3) to any non-communicants or unbelievers present, and 4) to the principalities and powers. Yet, in order for a proclamation to be effective, it must be understood. At the Table we see, feel and taste the Good News of the Gospel in a powerful, tangible way - but, unless we know what we're seeing, tasting and feeling, we cannot eat and drink in faith, or make any effective proclamation.

In other Words, the Sacrament needs the Word to make it powerful and effective. The sacrament isn't a sacrament without the Word, but joined to the Word it is an effective means of grace. (That's why, until about the 1970s or so, the order in the whole church throughout the whole world throughout the whole of history was Word then Sacrament.) And the sacrament isn't only celebrated in the context of the preaching of the Word, but in the very Breaking of Bread itself the Word has its vital place. Usually we read the whole of 1 Cor. 11:23-24 and 25-26 as the Words of Institution, but at the very minimum we need to identify what the bread and wine are: 'This is my body' (1 Cor. 11:24), 'This is my blood' (Matt. 26:28). Otherwise we might just end up having something to eat and drink together.

Now, these aren't magic words, not a formula upon which everything depends. After all, these are only 2 out of the 8 things needed for the Lord's Supper. We need the Words of Institution, but they're not all that we need.

Thankfully, our God is the God of grace. And that's a wonderful thing for pastors and elders to remember when it comes to Communion. You see, sometimes we slip up. I remember one Sunday taking the Table in another church. After I had given thanks, broke the bread and said the Words of Institution for the bread, I ate the bread and closed my eyes. When I heard the elders come back to the Table I opened my eyes, only to discover that the distributed the bread and cup together in that church. So everyone had drunk, but there hadn't been any Words of Institution for the Cup. On such occasions it's important to remember that it isn't a magic formula, and God is a gracious God - and in His grace He can still feed us with the body and blood of His Son despite our slip ups.

And one of the ways that the grace of God is at work in such situations is through the goodness of repetition. When I spoke to people afterwards that Sunday, they were really surprised that I said I had forgotten the Words over the Cup. I hadn't said the words, but they had heard them. You see, most of us remember the Words so well, because we hear them every week at the Table, that we hardly notice when they're missing. We associate them so much with the Table that we sort of hear them automatically. When the emblems are uncovered on the Table, the Words ring in our heads.

So, in those places where the Words have been abandoned, through the grace of God and goodness of years of repetition, we who remember are probably getting the benefit of the Supper. But what of the new generation who don't hear the Words every week and so don't remember them? What of the new Christians who only see us eating bread and drinking wine at some point in the service without ever being told 'This is my body ... This is my blood'? Does it just become a case of having something to eat and drink together while we sing?

The Words of Institution aren't the only thing that makes the Supper the Supper, but they are a vital thing.


Now, the reason I've been very reluctant to write about this up to now, is that I don't want to be misunderstood as being critical of others. That's not my intent. I don't want to be sweeping in, wagging my finger and saying 'Tut, tut'. What I do want to to do is make an earnest plea for us all to keep our eyes on Jesus Christ and His death in our place as we come to the Table, so that we might all loudly, confidently and clearly proclaim the Lord's death with each and every Communion, and there feed on Him our hearts by faith with thanksgiving.