God's "Now-Word" is Jesus: There's no such thing as a "rhema" word 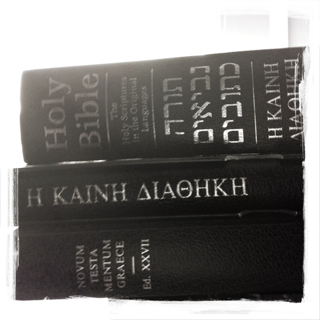 I want to clear up something very important today. You see, somehow an idea has crept in among charismatics, which then makes it's way over to pentecostals, that God speaks two types of words, which can be distinguished by two different Greek words - logos and rhema.

According to this "teaching", a "logos" word is what God has spoken in the past, which we have written down in the Bible. The "rhema" word, however, is supposed to be something new and fresh, which God speaks now - it's His "now-word". As a result, the impression often comes across that the "rhema" word is somehow better or more desirable than the "logos" word, with the "logos" seen as rather like dry words on a page until the "rhema" comes.

Now, it's true that there are two words in Greek, logos and rhema, which could both (depending on the context) be translated as "word" in English. But does that mean we can build a doctrine of two different types of words spoken by God upon these two Greek words?

Well let's have a very brief tour of some of the evidence, which I think will make the answer to that question clear, and then I want to go on to think about why this matters so much.

So, first the evidence. One way that we can often learn a good bit about Greek words in the New Testament is how those words were used in the Septuagint (the Greek translation of the Old Testament). The Septuagint (or LXX) was the Bible used by the early church, and so it's usage of Greek words would have been very influential at the time the New Testament was being written. So what can the LXX tell us about "logos" and "rhema"? Do they highlight an important distinction between two types of word in the Old Testament? Not at all. The LXX uses logos and rhema interchangeably to translate the same Hebrew word for "word". In other words, in the Bible of the early church, logos and rhema were synonyms for the same thing.

So this distinction between a logos word and rhema word just isn't there in the Old Testament. But is it something that suddenly appears in the New Testament? Does God suddenly start to speak in two different ways? Well, how does the New Testament use the words?

Well, the New Testament uses them the same way as in the LXX - as synonymns. There are a number of verse which even use the two words in the same verse with clearly the same meaning. So, for example, in Acts 10:44 we read about what happened when Peter preached the gospel to Cornelius and his household:


While Peter was still speaking these words [ῥήματα - from rhema], the Holy Spirit fell upon all those who heard the word [λόγον - from logos].

Here rhema and logos are both referring to Peter's preaching of the Gospel - the two words for "word" are both talking about the same thing.


He who rejects Me, and does not receive My words [ῥήματά - from rhema], has that which judges him—the word [λόγος - logos] that I have spoken will judge him in the last day.

Those who don't receive Christ's Word are judged by His Word. Again rhema and logos are referring to the same thing.

Hebrews 12:19 uses the two words to describe what happened at Mount Sinai when the Israelites heard God's voice speaking the 10 Commandments:


and the sound of a trumpet and the voice of words [ῥημάτων - from rhema], so that those who heard it begged that the word [λόγον - from logos] should not be spoken to them anymore.

They heard rhema and so begged not to hear logos. Very clearly the two words are used synonymously to refer to the same thing.

It's not only the verses that use these two words as synonyms that show us that the distinction between written logos and now-word rhema don't add up. Peter's use of the word rhema is particularly interesting in 1 Peter 1:25:

Peter is talking about the gospel, and tells us that this is the everlasting word of God. In other words, he's talking about what God has spoken, and what we have received in the written word of Scripture. This is God's everlasting word, not some momentary "now"-word. And yet Peter calls it rhema, not logos. So Peter absolutely demolishes this artificial distinction between past-logos and now-rhema in this one verse.

And just as Peter uses rhema for the everlasting word, so Paul uses logos to refer to something that those who promote this "teaching" would undoubtedly expect to be called rhema. What could be more of a "now"-word than the Word of Wisdom or the Word of Knowledge? And yet the word for "word" in the names of those two gifts is logos (1 Cor. 12:8).

Finally, God does the same things through logos and rhema. He created the world by rhema (Heb. 11:3) and logos (2 Pet. 3:5) and He sanctifies us by logos (John 17:17) and rhema (Eph. 5:25-26). All the evidence shows us that logos and rhema are two synonymous ways of referring to God's Word, not two different types of word.

Dangers of making the mistake of thinking there's such a thing as a rhema word:

1. It Undermines the Authority of Scripture:
There are some huge problems when we start to think that we need a "rhema"word in addition to the "logos" word, and the first of these problems is that it undermines the authority of Scripture. What Scripture says, God says. That means I don't need another word from God before I believe or obey His Word in Scripture. And yet, all too many Christians are ignoring what God has spoken in the Bible while they wait for another word on the same subject. "The Holy Spirit hasn't spoken to me about that yet", they say. But if it's in Scripture, then the Holy Spirit has spoken to you about it! You don't need to wait for a so-called "now"-word; you have the everlasting Word of God in the Bible.

2. It Undermines the Sufficiency of Scripture:
The Sufficiency of Scripture means that, in the Bible, we have everything we need for salvation and godliness. That means we don't need a "fresh" word to tell us what we need for godliness in Christ; we already have it in Scripture. God has not left us in the dark, waiting until a rhema comes along to enlighten our path. No, He is not a God who doles out little portions of grace or illumination now and then, but rather a God who has lavished His super-abundant grace on us in Christ Jesus, and in His loving grace He has given us more than we need for each moment in His Word, in Scripture.

3. It Undermines the Clarity of God's Word:
This time it's not so much the waiting for a rhema-word that's the problem, but rather just the idea that we need this teaching in the first place. You see, in reading the Bible normally, in comparing Scripture with Scripture, we'd never see this distinction (because it isn't there!). But this whole concept of "rhema"-words is premised on the idea that we need someone to teach us this distinction. It's some sort of new revelation or secret knowledge. (And that has to be admitted, for no one in the first 1950 years or more of church history had ever heard of such a distinction, so it must be new or secret.) Now any idea of "secret knowledge" should, of course, put us on our guard; needing secret knowledge is gnosticism, not Christianity. But perhaps even more fundamentally, this undermines the clarity of Scripture - it tells Christians that they can't understand the Bible without someone coming along to show them secrets. And that is a very dangerous idea indeed!

4. It Leads to a Lack of Confidence in the Power of God's Word in Scripture:
If we need a "now"-word, a "rhema"-word, to hear from God and know His power at work here and now, then what does that say about the power of God's Word in Scripture? And this is a fundamental question. For, you see, my ministry as a pastor and teacher relies upon, and must rely upon, the fact that God's Word is powerful to do its work. I know that I don't have to rely on my own bright ideas or the latest marketing trend, because God's Word in Scripture is powerful. So, like Martin Luther, 'I simply taught, preached, and wrote God’s Word; otherwise I did nothing... I did nothing; the Word did everything...  I did nothing; I let the Word do its work.' (Martin Luther, Sermon from March 10th 1522, LW 51:77). But if I have to wait for a fresh "rhema" word, then I can't have that confidence in the written Word to do its work. If I have to wait for a fresh "rhema" word, then the ministry no longer relies on the power of God's Word, but on my own ability to discern the "rhema" rightly. Suddenly it's all about me and how good I am at getting "rhemas", instead of all about Jesus and how good and gracious He is to us in the Scriptures.

5. It Changes the Focus of the Word:
There's a fundamental directional shift that occurs when we buy into this "rhema"-word business. You see, Scripture, rightly understood, moves us in a very particular direction - out from ourselves to Jesus. All the Scriptures speak of Christ (Luke 24:27), and Jesus says that we cannot understand the Scriptures at all without seeing Him and coming to Him (John 5:39-40; 46-47). So Scripture both points us to Jesus and brings us to Jesus. The whole direction of Scripture is Christward!

But this whole "rhema" business works in the complete opposite direction: it becomes about what I must do, and so drives me further back into myself (which is the opposite direction from Jesus!). God's "Word" (in this "rhema" understanding) becomes focused on me, instead of focused on Jesus. And that is very bad news indeed.

6. It Elevates Subjective Experience Over Jesus Christ
The "rhema"/"logos" distinction ends up elevating the supposed "rhema" over the "logos". Now, it might not always be expressed in those terms, but that's what it does. For the logos is seen to need a "rhema", otherwise it's so often thought of as simply words (often"dry words") on a page. True spirituality and true power are seen to come through the arrival of the "rhema". And so, understandably, whether or not it's expressed officially, in people's minds the rhema becomes the most important.

But what is this rhema? It's a temporary and subjective thing. The written Word, however, is everlasting and objective. But more than that, the written word (and the proclamation of that Word) holds out to us Christ the living, eternal Word. Jesus is God's Word to us now and at all times. And no temporary, subjective experience can ever compare to Him. The true "now"-word which God is constantly speaking to us is Jesus. That's why true prophecy is the 'testimony of Jesus' (Rev. 19:10). That's why true preaching is proclaiming Christ biblically. That's why the Scriptures constantly turn us out from ourselves and out to Jesus.

To elevate and chase after some temporary supposed "rhema" word at the expense of seeing Christ, God's "Yes"-Word, held out to us in Scripture, is folly, madness, and ultimately death. Christ is the Logos, and He is our life. And He constantly invites us, and appeals to us, to look to Him and live. So why would we look away to chase after something else?