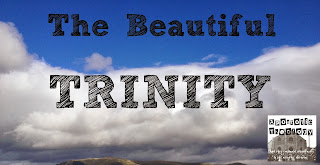 I've got the beginning of a new project for you today: a series of short videos on the Tenets of the Apostolic Church. They're only short, so they're not in depth teaching videos. Rather the idea is more to give a flavour of the theology and an invitation into a worldview. Maybe in the future I'll do something more in-depth - but for the moment, if that's what you're looking for, why not check out the Audio page at the top of the blog where you'll find mp3s of the first six hours of theology sessions I've been teaching in Castleford. There are another six hours to come too. (Don't worry, they aren't too scarily complicated - they're for all ages, with the current group stretching from about 15 to 80.)

Anyway, here's today's video on Tenet 1: The Unity of the Godhead and Trinity of Persons therein. And below the video you can find a transcript of roughly what I said. (P.S. You can also find the video on Youtube, where you can subscribe to the channel for future videos too, if you like.)

The Tenets of the Apostolic Church don’t begin by attempting to prove God’s existence, nor with a description of His attributes. They don’t even begin with an appeal to the authority of Scripture (although we do believe it – but that, rightly, comes later). No, we begin somewhere much better, somewhere much more beautiful; we begin with the loveliest truth of all. We begin with our faith in the God of Love - The Triune God, who from all eternity and for all eternity is The Father loving His Son in the unity of the Spirit.

That’s who our God is! That’s the God in whom we trust! God isn’t just a bundle of attributes or Philosophical necessity. God is a loving Father who eternally pours out His love on His Son in the Spirit. Our God is three Persons united in love.

And that’s what we mean when we talk about God. When we talk about God, we don’t mean the same thing as other religions. We don’t mean what many people in the West think of when they think of God either. The God we’re talking about is the loving God. That’s at the very essence of His being. God is Love. And He’s always been love. And He always will be love. Because He’s the Triune God.

Some ppl think God’s mean or cruel (as if His wrath were what defined Him). After all, if Jesus satisfied the wrath of God through His death in our place for our sin on the Cross, then God’s wrath must be rather significant. And it’s true, the wrath of God is our greatest problem. Yet God in His love came in the person of His Son to bear His own wrath for us, to deal with our greatest problem.

So we start our Tenets with the Good News that God is love. With the beautiful news of the Holy Trinity. With the lovely news of the Father who eternally loves His Son in the Spirit. Everything else depends on this.

The Trinity is the fundamental reality of the Christian faith. It’s not some sort of complicated maths problem. Nor a scary, advanced doctrine for theologians. It’s the very identity of our God.

And it’s the very foundation of the Gospel. For as the Father loves His Son, He wants others to love Him too. As God’s love overflows from the Father to the Son in the Spirit, His delight is for His love to keep on overflowing to us too, through the Son, by the Spirit. At the Cross we see the overflowing love of the Triune God.
Labels: Apostolic Church doctrine God the Father Tenets theology Trinity videos