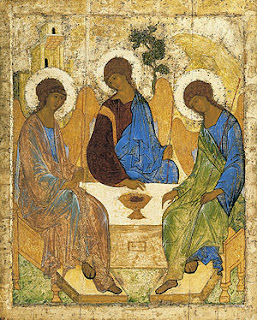 A few months ago I was sitting late one night deep in theological discussion with another pastor (which, believe it or not, is a rarity for me). Somehow we had gotten from the outright heresy of Oneness theology (i.e. denying the Trinity) to election and the nature of faith, and then from that onto the question of the unevangelised. (I’m convinced that the only response to the question of the unevangelised is to evangelise – to preach Christ to them.) Now my friend and I have our differences, but we’re both conservative evangelical pentecostals. As I was lamenting the arguments of some of a new wave of, shall we say, less conservative Pentecostals who say that explicit faith in Christ is not necessary for salvation, my friend suddenly stopped me and said, ‘But Abraham was saved without explicit faith in Christ.’

Jesus said that Abraham saw His day, rejoiced and was glad (John 8:56). Those who were listening to Him at that time knew exactly what that meant, for they immediately reacted by saying, ‘You are not yet fifty years old, and have You seen Abraham?’ (John 8:57). They knew that for Abraham to have seen Christ’s day, then Christ would have had to have seen Abraham back then in Abraham’s day. For Abraham to see Christ’s day doesn’t just mean that Abraham was looking forward to some far-future day when God would bring salvation to His people. No. For Abraham to see Christ’s day meant Abraham seeing Christ who brought to him salvation.

2) Abraham was justified by faith in Christ

But the Old Testament actually uses the name of God. Abraham ‘believed in the LORD’, he trusted in YHWH. This isn’t a general belief in the Godhead, but a personal trust in the One whom he knew as the LORD. And if we zoom out a bit in the Old Testament context, we see exactly who this LORD is.

So it’s not just a general belief in the Godhead that Abraham has here in Genesis 15, but a personal trust in Jesus the LORD, who is the Word of the LORD.

The reason why Genesis 15:6 is such a well-known verse, quoted so many times in the New Testament, is because the New Testament sets forth Abraham’s faith as an example or model for our faith. Romans 4 makes this clear:

Now it was not written for his sake alone that it was imputed to him, 24 but also for us. It shall be imputed to us who believe in Him who raised up Jesus our Lord from the dead, 25 who was delivered up because of our offenses, and was raised because of our justification. (Romans 4:23-25)

4) There is no other way to the Father, except through Jesus

Jesus said: ‘I am the way, the truth, and the life. No one comes to the Father except through Me’ (John 14:6). He didn’t say that from now on He would be the way, but that in the past there used to be some other way. No! Jesus has always been the only way to the Father – even way back in the days of Abraham (and before). As John 1:18 tells us: ‘No one has seen God at any time. The only begotten Son, who is in the bosom of the Father, He has declared Him.’ Jesus is the revelation of God and Jesus is the salvation of God, and that has always been true and will always be true.
Labels: faith Jesus justification Old Testament salvation Word