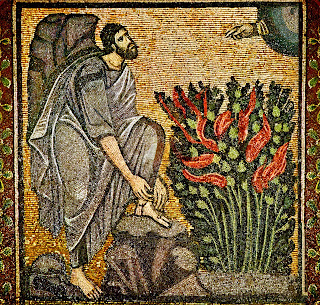 Despite Moses’ greatness, he wasn’t separate from the people of Israel. Although he led them, he was one of them. Moses was an Israelite. Moses was an heir of the covenant the LORD had made with Abraham. Although God spoke His law and covenant through Moses, it wasn’t Moses’ word to the other Israelites, but God’s Word to them all, including Moses.

So, did Moses know that Father and the Son? The answer to that question, of course, is a resounding yes, but just humour me for a few moments as we look at the evidence together. (Well, I suppose I should say ‘some of the evidence’, as if we wanted to look at all the evidence that Moses knew Jesus and was saved by Jesus, we’d be here for quite some time!)

In Exodus 3, Moses had a dramatic encounter with God at the burning bush. But who was it that Moses met there? Ex. 3:2 tells us that it was ‘the Angel of the LORD’ – so it was one sent from God to speak for God. Yet, not only does the Angel speak for God, He actually speaks as God: ‘I am the God of your father—the God of Abraham, the God of Isaac, and the God of Jacob’ (Ex. 3:6; see also verse 7, ‘And the LORD said’, verse 14 ‘and God said’). Moses himself realises that this Angel is God, and so hides his face, ‘for he was afraid to look upon God’ (Ex. 3:6).

Let’s skip on the Exodus 33. There we read that Moses used to meet with the LORD face to face in a tent outside the camp (Ex. 33:7-11). Yet verse 20 tells us that Moses cannot see the LORD’s face and live. At first that might seem a bit strange, but if we zoom out a bit and see the whole chapter in its context it might become a bit more clear. For when we do that, we quickly see that verses 7-11 happen at a different time from everything else in this chapter and the surrounding chapters. Verses 7-11, where Moses meets with the LORD face to face are something that happens at a later time, but Moses tells us about it now deliberately before we read about not being able to see God’s face and live in verse 20. Moses is pointing out to us that the LORD of vv. 7-11 is the LORD, and the LORD of v.20 is the LORD, and yet they are two different persons. (You see, Moses does sound like a Christian after all!)

So whose face does Moses see? Well, when Moses goes out to this tent outside the camp to speak with the LORD face to face, ‘the pillar of cloud descended and stood at the door of the tabernacle, and the LORD talked with Moses’ (Ex. 33:9). How does that help us? Because back in Exodus 14 we read about who was leading Israel in the pillar of cloud by day and the pillar of fire by night – it was the Angel of the LORD (Ex. 14:19), the LORD sent from the LORD – it was Jesus.

So Moses met Jesus in the burning bush. Jesus delivered the children of Israel from Egypt and led them in the pillar of cloud. And Jesus met with Moses face to face and spoke with him in the tent outside the camp. With that evidence, I think we can quite confidently say that Moses knew Jesus.

Yet Moses also knew the LORD whose face could not be seen (Ex. 33:20). Let’s go back to Exodus 3 a moment. The Angel of the LORD says something peculiar to Moses. The Angel has already told Moses that He is the God of Abraham, Isaac and Jacob (Ex. 3:6), and we’ve been told already that Moses speaks to the Angel as God (‘But Moses said to God’ –v.11). Yet, then the Angel says: ‘I will certainly be with you. And this shall be a sign to you that I have sent you: When you have brought the people out of Egypt, you shall serve God on this mountain’ (Ex. 3:12). So the Angel is God (He’s just about to reveal His name as YHWH, Ex. 3:14), yet He’s going to bring the Israelites to that mountain to serve God. The Angel who is God speaks about God in the third person, when He has just spoken about Himself as God in the first person and is just about to speak about Himself as God in the first person again. Interesting.

So what happens when the children of Israel get to that mountain? When they get to the mountain we read one of the most astonishing chapters in the Bible (well, astonishing if you forget that God is and always has been the Triune God) – the chapter with the two LORDs! In Exodus 19 the LORD (who is on the mountain) tells Moses to prepare the people because the LORD is going to descend upon the mountain (Ex. 19:10-11). Then, on the third day when the LORD came down, the LORD called Moses up the mountain, ‘And the LORD said to Moses, “Go down and warn the people, lest they break through to gaze at the LORD, and many of them perish. Also let the priests who come near the LORD consecrate themselves, lest the LORD break out against them.”’ (Ex. 19:21-22). The LORD speaks to Moses about the LORD in the third person. Then in verse 24, the LORD says: ‘But do not let the priests and the people break through to come up to the Lord, lest He break out against them.’ (Ex. 19:24). See that – the LORD calls the LORD ‘He’ – not ‘I’, but ‘He’. There are very clearly two LORDs here on Mount Sinai!

We’ve already seen that the Angel is Jesus, and that it’s Jesus with whom Moses speaks face to face. So the other LORD on Sinai, the One whom the Angel reveals, must be the One whom Jesus reveals. And who is that? ‘No one has seen God at any time. The only begotten Son, who is in the bosom of the Father, He has declared Him’ (John 1:18). ‘Jesus said to him, “I am the way, the truth, and the life. No one comes to the Father except through Me’ (John 14:6). Jesus is the LORD sent from the LORD who reveals the LORD who is the Father.

So that means that the one with whom Moses speaks in Ex. 33, whose face Moses cannot see, but whom Moses knows, whose goodness Moses sees, and who declares His name to Moses, is God the Father.