On the Word of the Lord and words from the Lord (Part 2 - Prophecy is an Objective, External Word) 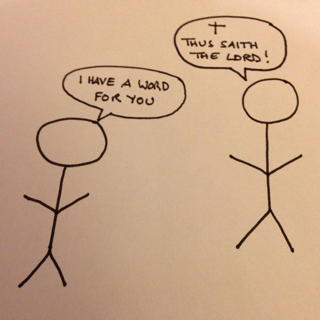 
As with every other form of the three-fold Word, prophecy does not come from us. It does not find its origin in us. It is God’s Word spoken outside of us, to us. And so, if prophecy is the Word of the Lord, that demands a very high view of prophecy.


In her early years that, perhaps more than anything else, characterised the Apostolic Church as distinctive. Other Pentecostals frequently criticised our view of prophecy (particularly in connection with the office of the prophet). Why this criticism? To a large degree it was because we saw prophecy as the Word of the Lord coming to us from outside of us; it was because we saw the prophetic Word as an objective, external Word.

Increasingly today people speak of prophecy as if it were an internal, subjective word – a word that comes (in some way) from us, and certainly from inside of us. And such a view can only lead to a low view of the gift of prophecy and of the office of the prophet. Grudem takes this sort of approach (and is, to a large degree, responsible for much of its popularity). He writes of prophecy as ‘speaking merely human words to report something God brings to mind’. But that makes prophecy both subjective and internal. If that’s what prophecy is, ‘merely human words to report something God brings to mind’, then such prophecy comes from inside of us. The subjectivisation of prophecy then continues when this idea is extended in popular thought, to the degree that every Christian is expected to frequently hear from God in nearly every situation in this way. Rather than listening to the Word coming to us from the outside, we end up searching for impressions from the inside. But that’s nothing like what we see in Scripture.


In the Bible, when prophecy comes, people listen (or refuse to listen) to an external voice, to something that comes to them from the outside as a gracious gift. God sent His prophets to speak even to His apostles (Acts 21:4, 9-11). Even when God speaks to Paul to send Him to Macedonia, it is not through a feeling or a vague inward impression, but rather He sends a man in a vision with an external, objective word (and what’s more, in that case Paul was the prophet to speak this word to the rest of the group as God’s external, objective Word to them). They don’t all just get some sort of subjective impression; rather, God graciously speaks an external, objective Word.

That’s why the cessationists can claim that Grudem, and many charismatics following after him, are not talking about what the Bible calls prophecy, when they talk about prophecy. Biblical prophecy is no mere impression; it’s not ‘speaking merely human words to report something God brings to mind’.

One of our great older apostles, Pastor Ernie Williams (once of Ghana, and nowadays of Ammanford) explains prophecy in a very different way from Grudem. Far from Grudem’s ‘merely human words to report something that God brings to mind’, Ernie Williams says that in prophecy ‘both the substance and the expression of the Word must be initiated by the Spirit of God.’ (Now, Ernie Williams is a careful thinker and Bible reader, so he makes clear that this isn’t some sort of ecstatic possession and that ‘it does not mean that we are no longer responsible for what we say’.)

Previous generations of Apostolics taught in the same way as Ernie Williams. D.P. Williams defined prophecy as ‘a Divinely generated utterance through human lips by the indwelling Spirit of God’ and T.N. Turnbull even wrote that ‘every time the prophet speaks, he must be able to preface his message with the words, “Thus saith the Lord”’. (Turnbull isn’t at all saying that those called to the office of the prophet are infallible or that prophecy doesn’t need to be judged – he’s simply pointing out the high view we must take of the prophetic word and the seriousness with which we must treat it). W.A.C. Rowe put it very simply: ‘true prophecy is the Word of God’.

George Perfect took on Grudem’s view head on (decades before Grudem ever articulated it):

‘The Spirit of God is in the word or it is no word of God at all. I think it would get over many of our difficulties about prophecy in the assemblies if those who have the gift of prophecy would realise that they cannot prophesy except by the Spirit of God… It is not sufficient for them to have revelation from God; it is not sufficient to realise even that God has something for them to say. The Holy Spirit must say it.’ (‘The Divine Breath’, The Enduring Word: Penygroes Convention Report 1944, pp.120-121)

Now, this high view of prophecy held by our Apostolic forefathers meant, not only that they took prophecy rather seriously (after all, it would be rather sinful to pass off something as the Word of the Lord that wasn’t the Word of the Lord), but also that they didn’t regard it as a private matter, but rather something that would rightly find its expression in the Church.

According to the Tenets, ‘the nine gifts of the Holy Ghost’ are given ‘for the edification, exhortation and comfort of the Church, which is the Body of Christ’ (Tenet 6), and the office of the prophet is a ministry of the government of the Church (Tenet 9). In fact the primary location for the operation of the gift of prophecy would have been within the Word and Sacrament context of the Breaking of Bread service The gifts were explicitly not to be used in the early years on a Sunday evening at the Gospel Service as that was an evangelistic meeting at which many non-Christians were expected to be present, as the gifts were viewed as being for the church. They were also explicitly not to be in use on any occasion when there were no elders present. In other words, just because you had a couple of Christian friends round for dinner didn’t mean you could start prophesying over them – prophecy is for the church and so should be given in the presence of the elders of the church who have a particular responsibility to test and weigh it, and to protect the flock from error. (Now this is just a bit of historical background to demonstrate that the early Apostolics viewed prophecy as something that found its proper place in the church. Interestingly, this also shows that some attempts to modernise the language of the Tenets actually end up changing the theological points they were making, but that is by the by.)

What does this all mean? Well, it means that as an objective, external Word, we’re not supposed to be living by our own ‘prophetic’ impressions. We don’t prophesy to ourselves. As D.P. Williams wrote, ‘Prophecy is not for individual use, guidance or direction. It is for the Body… Those that have taken upon themselves to misuse the gifts for themselves, in private corners, have landed in a “no man’s land” of confusion.’ (DPW, The Prophetical Ministry in the Church, pp.19-20). The prophetic word is something that comes from the outside, as God sends His messenger to speak to us as His people. Prophecy is external, objective and it is Word (not feeling or impression).

That’s how God works. He reveals Himself in Jesus, and through Jesus reveals Himself in His 3-fold Word (Jesus, Scripture & Proclamation). His revelation, His Word, is always something outside of us that He sends to us. Just as the Lord Jesus Christ, the Revelation of God, came to us and was graciously given to us, so too the proclaimed Word in prophecy comes to us and is graciously given to us from the outside so that we might be turned out from ourselves to behold Christ.