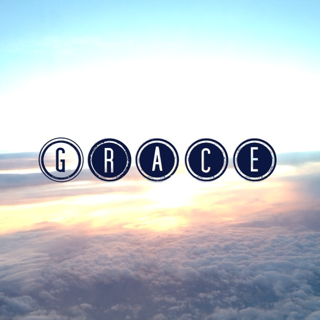 
has saved us and called us with a holy calling, not according to our works, but according to His own purpose and grace which was given to us in Christ Jesus before time began,  but has now been revealed by the appearing of our Saviour Jesus Christ, who has abolished death and brought life and immortality to light through the gospel


The grace by which we’re saved was revealed by the appearing of Christ and through the Cross of Christ. It’s the same grace that was given to us ‘before time began’. But even then it was given to us ‘in Christ’. Grace isn’t given BY Christ, but IN Christ. Grace isn’t revealed by His teaching and example, but in His Person and His Work, in His Incarnation and Atonement!

It’s not simply that Jesus came and died and rose because of a principle called grace. No, Jesus came and lived for us, obeyed for us, died for us, triumphed for us, rose for us and that is grace! So when we say the Grace together on a Sunday, speaking of ‘the grace of our Lord Jesus Christ’ (2 Cor. 13:14), we’re not talking about some thing that Jesus gives us. It’s not grace from Jesus, but grace that is Jesus!
Ephesians tells us that this is the grace by which we’re saved

But God, who is rich in mercy, because of His great love with which He loved us,  even when we were dead in trespasses, made us alive together with Christ (by grace you have been saved),  and raised us up together, and made us sit together in the heavenly places in Christ Jesus (Eph. 2:4-6)

Where it says, ‘By grace you have been saved’, that’s a little aside, explaining what it is to made ‘alive together with Christ.’ So, to be saved by grace is to be alive in Christ; getting grace is getting Jesus the Risen Saviour!

What spiritual blessings does it say we get?


All these we get ‘according to the riches of His grace’ (v.7) and ‘in Christ’. To receive these spiritual blessings by grace is to receive them ‘in Christ’. For the Grace of God is found only in Jesus Christ!

The prologue to John’s Gospel tells us that ‘the Word became flesh and dwelt among us, and we beheld His glory, the glory as of the only begotten of the Father, full of grace and truth… And of His fullness we have all received, and grace for grace’ (John 1:14,16). Grace and truth aren’t substances that Jesus is full of! Just as He is the Truth, so too He is the Grace of God. Jesus is the fullness of grace.