A Taste of Heaven on a Sunday Morning 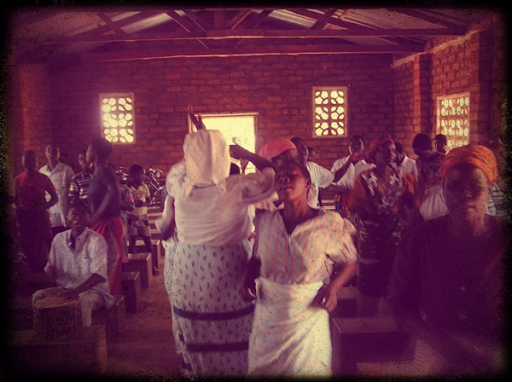 On the way out the door after the Breaking of Bread yesterday, someone caught me just to say that they had felt like they were in heaven during the worship. And that’s a good thing, because that’s what the worship of the church is – a foretaste of heaven. The book of Hebrews puts it like this:

But you have come to Mount Zion and to the city of the living God, the heavenly Jerusalem, to an innumerable company of angels, 23 to the general assembly and church of the firstborn who are registered in heaven, to God the Judge of all, to the spirits of just men made perfect, 24 to Jesus the Mediator of the new covenant, and to the blood of sprinkling that speaks better things than that of Abel. (Heb. 12:22-24)

As we gather together as the church in worship, we draw near into the presence of the living God. Here we read that it’s not simply that God comes down and gives us a glimpse of His presence. No, He lifts us up into His heavenly throne room (for that’s the only way that we could be worshipping in the presence of ‘an innumerable company of angels’ and ‘the spirits of just men made perfect’). In fact, when we worship in the UK, we worship along with those in Malawi, Belgium, South Korea, Chile, and the rest of the world, for we come ‘to the general assembly and church of the firstborn who are registered in heaven’. We join with the church around the world and throughout the ages as we worship, for our God lifts us all up into His heavenly presence.

And so, in worship, we don’t remember Christ and what He has done for us from afar; no, we worship in the very presence of Christ our Mediator who shed His blood for us. As we worship, we know the immanence (nearness) of the Triune God, not because He becomes less transcendent (high and lifted up), but because He lifts us up into the heavenly places.

And Hebrews 12:22-24 isn’t a strange one-off passage on this theme. In 1 Cor. 11:10 we see that we worship in the presence of the angels. Ephesians 2:6 tells us that God has ‘raised us up together, and made us sit together in the heavenly places in Christ Jesus.’ In Revelation we see John, who is worshipping ‘in the Spirit on the Lord’s Day’ (Rev. 1:10) on earth, being lifted up into the reality of the heavenly worship (in Rev. 4-5).

We’re not conscious of this reality in the same way John was in his vision. We’re not even always mindful of it. But the Bible tells us that that’s what happens when we come to worship: God lifts us up into His heavenly presence. We do indeed come before the Throne of Grace.