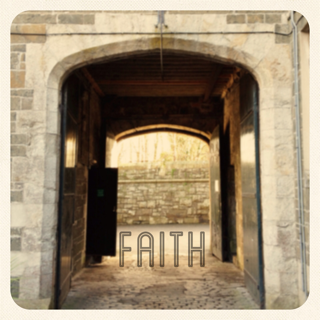 Last week we had a look at two things about grace, what it isn’t (Grace is not a Thing) and what it is (Grace is Christ and Him Crucified) and that inevitable leads us to the question of faith. ‘For by grace you have been saved through faith’ (Eph. 2:8) – the two go hand in hand. But, having seen what grace is, that helps us see what faith is too. For, like grace, faith is not a thing.

Some people want to make faith a thing that saves. So, they might talk about God electing us based on our foreseen faith. Or they might talk about our faith being counted for righteousness in justification (as opposed to the imputation of Christ’s righteousness). But in both those cases faith becomes a saving thing. If God elects us based on foreseen faith, then faith has somehow become a merit in us. If my faith is counted for righteousness, rather than Christ’s perfect obedience, then again, faith has somehow become a way of meriting salvation. And if faith were a thing in us that merited salvation, that would mean that salvation was down to something in us, rather than the grace of God.

Now, if we have a vague notion of what grace is, that might sound alright. If grace were simply God’s niceness, then that sort of grace could go together with faith as a thing. But (as we saw last week), grace isn’t a vague niceness. Grace isn’t even simply God’s favour. Grace is Christ and Him crucified. And so, if we’re saved by grace through faith, that means we’re saved by Christ crucified through faith. And that helps us see a lot better the true nature of faith. For faith cannot be anything that adds to what Christ has done; no, faith is simply the manner in which we lay hold on Christ and Him crucified.

So what is faith? Faith is resting and relying and Jesus Christ and Him crucified for salvation. It’s resting and relying on Christ’s finished work alone. That means faith isn’t about what we do. It’s not about how well we believe and it’s not about how much we believe. It’s not about the quantity of faith, for faith isn’t a thing. That means salvation isn’t some equation: it’s not grace + faith = salvation. No, not at all! Faith is being overwhelmed by grace. Faith is being overwhelmed by Christ as He’s offered to us in the gospel.