On the Day the Pope announced his Resignation: The Permanent and the Ephemeral in the Life of the Church 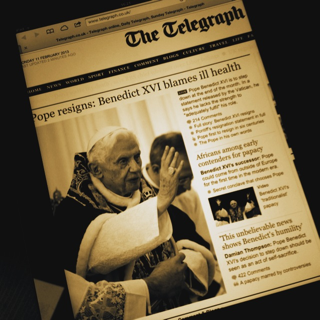 Today’s a bit of an odd day. In fact, there hasn’t been one like it for 598 years. That’s when Gregory XII resigned, on 4th July, 1415. Gregory, however, resigned to bring an end to the Western Schism (Although the Western Schism is also sometimes called the Great Schism, it’s not the same as the Great Schism between the Western church and Eastern Orthodoxy, which seems to have confused some journalists today.) Benedict is resigning for a very different reason indeed. That’s why it’s such a shock. Although Canon Law allows a Pope to resign due to health or old age, it’s never happened before and so didn’t seem likely ever to happen – until today.

Already speculation has started about the papabile (even though it isn’t all that long until Easter, by which time all that speculation will have come to an end). Twitter is awash with papal news. And it’s interestingly odd to see so many Protestants opine on who the cardinal electors should elect to the Petrine office.

And in between the papal tweets, I see things tweets on such subjects as the place of small groups in your church strategy or the latest worship album. Now, I’m no Roman Catholic, and I don’t mean to disparage small groups, strategies or worship albums, but somehow the resignation of a Pope highlights just how ephemeral the things we evangelicals get excited about can be. A small group or strategy may last a few years, a worship album nowadays will likely be forgotten in six months, but the nature of the Church of Jesus Christ and its government endure. (Not that I'm equating the papacy with the government of Christ's Church - far from it!)

Sometimes our attention as evangelicals can be so focused on strategies, or ways of accomplishing them like small groups, that we forget to even consider the true nature of the Church. I’ve heard it said at various times, in various places, by various people, that a church must have cell groups. Really? Somehow the Church seems to have survived for nearly 2000 years before cell groups were invented. And yet how often (and often in the very same contexts) do we see the role of the sacraments diminished in the life of the Church. Cell groups may be a strategy (and only one among many, I would hasten to add), but the sacraments are of the very essence of what it is to be a Church. Baptising new disciples is part of the great commission (Matt. 28:19), and normal church life involves continuing steadfastly in the breaking of bread (Acts 2:42). Without cell groups the Church will not collapse; without baptism and the Lord’s Supper there is no church.

Sometimes we act as if we need to use the latest ‘big thing’ in worship songs (with the most up to date and accomplished instrumentation of course – make it sound just like on the album!) in order to know the presence of God in our meetings. Yet Christ has promised to meet with us in His Word and at His Table. It’s not by us climbing up to heaven in an emotional high, but through His drawing near to us in the simple, ordinary means of Word and Sacrament. We have His presence in the same way as our forefathers did before the worship album had ever been invented. We know His presence just as persecuted Christians do in places where it is too dangerous to sing.

Now, the papacy may be a lot more durable than the latest worship album, but it’s not the answer either. We don’t need stability provided by the Petrine rock, for we have a sure foundation in Jesus Christ our cornerstone. We don’t need a conclave to elect a new ‘Vicar of Christ’, for Christ has sent His true vicar (representative on earth), the Holy Spirit whom He has poured out upon His Church. So while the news about the papacy might highlight how ephemeral some of our thinking and actions are, it doesn’t provide an alternative. Rather, as it hightlights the often ephemeral nature of things in the evangelical world, we should go to a far more enduring source than the See of Rome; we should turn our attention to Him who is the true Head of the Church, the One who was in the beginning with God and is God, Jesus Christ our Lord.

And that lasts much longer than an album, a strategy or even a Pope.
Labels: church ecclesiology random musings sacraments Word worship