Why the Reformation and the Revival are different (unless you're Welsh!) 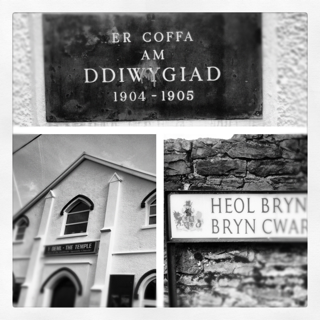 Last week I wrote about Reformation Day,  but I'm mentioning the Reformation once again today as it's just so important. It's not the sociological and political consequences of the Reformation (significant as those were) that make the Reformation so important, but something much, much greater than that: the recovery of the Gospel!
That's not to say that no one before the Reformation had the Gospel (NB Matt. 16:18), but simply that so much rubbish had been accumulated round about it, that the gospel was very well hidden indeed. (Remember, the Roman Church didn't codify it's beliefs about the gospel and salvation until the Council of Trent, after and in response to the Reformation, so they hadn't yet officially rejected the truth of justification by faith alone.) During the Reformation, God raised up men who proclaimed the truth of the gospel boldly and clearly, and the impact was huge. The Reformation resulted in what was probably the biggest Revival Europe has ever seen.
Now, among Pentecostals, Revival is probably a much more familiar concept than Reformation. So, very often I speak about the Reformation as a great Revival. But really, that's not exactly right.  Really it would be more accurate to say that the Reformation led to a revival. The Reformation was the recovery and proclamation of the truth of the Gospel, and the ensuing revival was the outcome of that clear proclamation of the Gospel. Reformation led to Revival. Gospel Proclamation led to Salvation. In the Reformation, the powerful Word of the Gospel was released, and the Word did its work, which brought about revival.
But the problem is, probably because we're more familiar with the concept of revival, sometimes we lose sight of the reality of reformation. So, some people talk about the need for a new reformation, yet they're not talking about a recovery of Gospel proclamation, but rather something much less important. Some of these "new reformations" go in completely the opposite direction to the original one: for Schuller it was self-esteem, and for Spong it was basically overthrowing Chrisitianity altogether!  Other "new reformations" are less heterodox, but often seem to involve giving the central place to something other than the gospel (e.g. C. Peter Wagner with his strange overemphases on and conceptions of 5 fold ministry and spiritual warfare, or the, already seemingly passé, emergent church, with it's downplaying of gospel proclamation). From a Pentecostal perspective, Schuller and Spong's concepts of reformation probably aren't having that much impact on us. It's more likely ideas like Wagner's that we have to worry about. It would be a huge mistake to think of giving centrality to something other than the gospel as the key to revival. It doesn't matter how important the ascension ministries, the gifts of the Spirit or spiritual warfare (rightly conceived, of course) are, none of them can take the place of the Gospel! So any notion of moving our emphasis from the Gospel to something else cannot in any way be seen as a new reformation.
A true new reformation would be a fresh recovery of the Gospel and it's bold proclamation. I was listening to the White Horse Inn the other day, and shuddered when the hosts suggested that actually, modern day American evangelicalism is probably far more Pelagian than the pre-Reformation catholic church. British Evangelicalism may differ in many ways from its American cousin, but I hear at least semi-Pelagianism often enough to know that we're not immune to their woes. The new Reformation we need is nothing short of a fresh grasp of the Gospel of God's grace towards us in Jesus Christ!
But I said that Reformation and Revival are different, unless you're Welsh.  That's because, in Welsh, you use the same word for both (diwygiad). Yet, I'm not mentioning this simply to give you a Welsh lesson, but because it reminds us that we can't only distinguish between the two, but that the two go together as well.
Why do I want to point out this connection? Simply because sometimes we can get a bit caught up in the need for revival and miss out on what revival really is. People attach the word revival to things that really aren't, because we so easily lose sight of the close connection between reformation and revival
If we fail to distinguish between the Reformation and our, sometimes faulty, notions of revival, we end up missing the centrality of the gospel. But if we fail to hold the two notions together, to see that the Reformation resulted in and can't be separated from one of the greatest of revivals, then we can fall into the trap of thinking that the Reformation is all about ticking the right doctrinal boxes.
Reformation and Revival belong together. The recovery of the gospel and its proclamation leads to people being saved. And that reminds us too, that revival isn't about exciting things happening among us Christians, but rather God working in us to work through us to reach others with the saving news of Christ who died for our sins and rose again for our justification.
So Reformation and Revival are different, but yet once we've seen that they're different, we can then see that they're the same. If we fail to see that they're different, we can lose the great Gospel recovery of the Reformation in something less important. But then when we hold the two together we see that, yes indeed, it is the gospel which is the power of God unto salvation (Romans 1:16). If we want a true revival, we should long for the accompanying reformation.