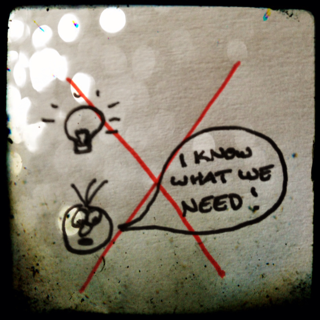 There’s a lot of hype flying about. Some of it is crazy hype. Some of it is ever so respectable. But yet, what these extremes have in common is the fact that they are nothing more than hype. And hype isn’t helpful.

Now, hype may seem helpful. Hype is, after all, something that gets people's attention. And so hype has the feeling of success about it. Things happen when there’s a lot of hype: people come, people respond, people are pleased. Hype then, in many ways would seem to equate to success.

But what type of success? Does what we call success always correspond to God’s blessing? Far from it. As Jesus points out in Matt. 7, even what people think of as success in terms of prophecy and miracles may not be recognised by the Lord. Or, as Martin Luther points out, "That wisdom which sees the invisible things of God in works as perceived by man is completely puffed up, blinded and hardened.” (Heidelberg Disputation, Th.22)

For Luther, that’s the Theology of Glory. Theologians of Glory think they can interpret things seeming to go well in this world as proof of God’s blessing. “If people are coming, God must blessing”, they say. Or, “if we have a good emotional experience, God must be at work.”

“Hold your horses!”, says Luther. Actually, Luther’s rather more direct than that.

And when we turn our eyes to the Cross, we see that our idea of success looks different to God’s true success. The theologian of glory inside us wants to see a crown; yet God Himself dons one made of piercing thorns. Our “glory” success looks like a throne, but God’s victorious throne is a wooden, yet wonderful, cross.

As we look to the Cross, we see that God is different from us. His ways are not our ways. His wisdom is far beyond our wisdom. And it’s the Cross which is our window into His ways and His wisdom. The Cross reveals our God. Christ Crucified reveals the Father.

And suddenly, those things that seemed worthless in light of the hype, are now seen to be powerful indeed. Preaching the Word and administering the sacraments might not match the excitement of the hype, but it doesn't need to; instead Word and Sacrament do something much greater — they take us to the Cross, and they deliver to us the Christ of the Cross. You see, we don’t need hype; we need Jesus!