Liturgical and Pentecostal (and why that’s a good thing!) 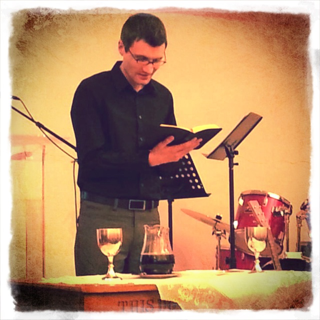 Sitting in a pew in the medieval church at the heart of a city where medieval and modern still sit comfortably side by side waiting for Holy Communion to commence on a pleasant spring evening a year or so ago, one might have been forgiven for expecting the pipes of the organ to spring to life or the minister to stand up to say the Lord’s Prayer and the Collect for Purity. Instead, as in so many English evangelical churches, irrespective of architecture, denomination or theology, it was the band that sprang into life with the sound of Hillsong stretching to the vaulted ceilings. Then, when the service did reach the communion, the minister made a long apology for the being liturgical, before asking people to pass the peace and then continuing on without much discernible liturgy at all. At that point the friends whose church I was visiting turned to me and said, ‘You’ll have had much more liturgy in your Pentecostal church this morning that we’re having in our Anglican one tonight.’ We smiled and laughted, and all knew it was true.

Thinking back, it reminds me slightly of another Communion in another historic Anglican church 150 yards away (it’s that sort of city!) about a decade earlier (only that time without the Hillsongs). It was my first full day in town. I had arrived with my parents the night before, and the three of us set off to go to church. Dad had found a Newfrontiers church on the internet, but it met in a school and we couldn’t find the right door to get in. So instead we set off for the Anglican church a fellow-Apostolic (along with most of the Christian students in town) attended.

It just so happened that that Sunday was Holy Communion (which I was soon to discover wasn’t every Sunday morning in non-Pentecostal churches!). It was a good church with good preaching, but I still remember one comment my mother made on the way to lunch: ‘Are you sure that was a Church of England church? It seemed much more like a Presbyterian service than a Church of Ireland service!’ She had a point; there wasn’t a Prayer Book in sight and, apart from one short prayer projected on the screen for the congregation to say together before Communion, the whole thing was about as liturgy-less as the hymn-prayer sandwich of traditional Ulster Presbyterianism.

But that one prayer that came up on the screen I still remember. Why? Well, because now I say it every Sunday at the Table. My assembly have got used to hearing me say it over the last 5 years that I’ve been here too, and now, for the last four or five months, we’ve been singing it together each Sunday morning. It’s the Prayer of Humble Access.

As Gregory Dix famously expressed it, Cranmer’s Order for Holy Communion was ‘the only effective attempt ever made to give liturgical expression to the doctrine of justification by faith alone’.

I’m not sure exactly why Dix said that (I don’t have a copy of his book and it seems to be the one page that’s not included in Google Books!). I know some of it is to do with certain changes from the Roman Mass. But I imagine that some of it’s to do with what Cranmer introduced as well, and especially ‘The Prayer of Humble Access’.

I love the Prayer of Humble Access, and, as I’ve said, you’d hear some form of it in my assembly nearly every week at the Breaking of Bread. Why? Well, one of the reasons is because the Prayer of Humble access makes clear that it’s not by our goodness but by God’s grace toward us in Christ that He feeds us at the Table. Here it is in modern language form (from An English Prayer Book):


We do not presume to come to this your table,
merciful Lord, trusting in our own righteousness,
but in your abundant and great mercies.
We are not even worthy
to gather up the crumbs under your table.
But you are the same Lord,
who delights in showing mercy.
Grant us, therefore, gracious Lord,
so to eat this bread and drink this wine
that our bodies and souls
may be cleansed by Christ's body and blood
and that we may evermore dwell in him,
and he in us. Amen.

And here’s the version we sing in Leeds:

This isn’t the entirety of our liturgy in Leeds, for the liturgy is as much to do with the shape of the service (Gathering in God’s Presence à Hearing God’s Word à Feeding on Christ at the Table à Being sent back out into the world in the power of the Spirit) as it is about particular forms of words. Maybe another time I’ll write about the shape of our service or the other forms we use each week, like the Lord’s Prayer, Memorial Acclamation (Dying You Destroyed Our Death, Rising You Restored Our Life, Lord Jesus come in glory!) and Sanctus (Holy, Holy, Holy, Lord God of Hosts; Heaven and Earth are full of Your Glory; Glory be to You, O Lord Most High).

But as I look out from the Communion Table on a Sunday as the congregation sings this prayer, I grow more and more convinced of the advantages of liturgy. So let me briefly elaborate on just three of the great things about the liturgy.

1) WORSHIP. When people don’t have to worry about unfamiliar words or how to fit the words to the music, it’s much easier to make those words their own prayer. And so, rather than being a limiting constriction, singing the liturgy actually allows a freedom in worship. Looking out from the Communion Table I’ve noticed more and more that, as people have become more and more familiar with this simple song over the last few months, the assembly has been filled with a freedom and joy in worship around the Table. And the joy is coming from the Gospel, as we sing of God giving us what we could never earn or deserve by His grace in Jesus.

2) CATECHESIS. When we repeat the same Gospel-words over and over again each week, that Gospel truth is more and more rooted in our thinking. We live in a transient age. Fewer and fewer people work Monday to Friday, nine to five, and so it’s harder to get people together during the week to teach the faith. It’s even hard to get people together every Sunday for systematic Bible teaching. (In my church 80% of the working adults regularly have to work shifts on Sundays.) Yet, the culture around us is constantly catechising us all with its own values, even through such ubiquitous things as the songs we hear over and over again on the radio.

But the liturgy fights back because it not only helps us to praise, but also helps to teach us the faith. I reckon it’s quite hard to repeat ‘Dying, You destroyed our death; Rising, You restored our life; Lord Jesus come in glory!’ Lord’s Day after Lord’s Day, month after month, year after year, without the centrality of Christ’s death and resurrection and the hope of His return being rooted in your thinking. Singing the Prayer of Humble access over and over again reminds us again and again that salvation is not of anything in us, but purely of God’s grace to us in Jesus. As we regularly recite the Creed together, it reinforces our understanding of who God is, freeing us from worldly ideas of God by pointing us again and again to the Triune God of Scripture, and freeing us from worldly and unscriptural views of salvation (things like prosperity theology, which alas, are all too common in the evangelical/Pentecostal world) by pointing us again and again to a faith which is rooted in the Incarnation of Christ.

3) EVANGELISM. When non-Christians come to church we want them to hear the Gospel. And hopefully they will in the preaching. But I’m sure anyone who’s spent a lot of time in a Pentecostal church will have to admit that that’s not always the case. Once I was involved in a discussion group on what would put you off inviting your friends to church. Although it came as a surprise to some of the older members of the group, I ventured the suggestion that uncertainty that people would hear the gospel on any given week would be a major factor. The other younger members of the group all agreed – we’d all just experienced too many Sundays of not knowing what was coming next, and not in a good way. If the Gospel isn’t always central, it gets to a point where you’re convinced that the Sunday you bring your friends the sermon’s going to be about marching on to victory, or taking the land, or spiritual warfare against territorial spirits (yes, I did indeed grow up in the 90s, and no, my church wasn’t actually that bad, and thankfully most of that’s long been left behind, but I’m sure there are modern day equivalent Pentecostal/charismatic hobby horses out there).

And the same thing’s true more often than you might expect in evangelical churches too – I’ll never forget one Sunday morning at university when the church was packed with non-Christians for a baptismal service, only for them to be treated to a sermon on the qualifications of deacons! We want non-Christians to hear the gospel in church, but sadly, sometimes our preaching lets us down.

But, the liturgy should proclaim the gospel even when we somehow forget to in our sermons. Even if I go off the rails on Sunday morning, my congregation will still hear of the death and resurrection of Jesus and of the great grace of God, because we’ll speak of them to one another in the liturgy. And they’ll hear of sin, repentance, and forgiveness as we examine ourselves and confess before the Lord’s Supper. And they’ll hear of salvation through the broken body and shed blood of Christ as the minister pronounces Christ’s own words at the Table.

And, any non-believers who come along regularly, regularly hear the gospel, not only in the sermon, but also in a short, sharp, memorable form that they repeat along with the rest of us week after week: Dying, You destroyed our death; Rising, You restored our life; Lord Jesus, come in glory!

So, there you go, liturgy isn’t something bad and scary. The liturgy’s there to point us to the Good News of Jesus Christ. It helps free us in worship. It helps teach us the fundamentals of the faith. And it helps us evangelise our friends and neighbours as we bring them along to church.
Labels: Apostolic Church ecclesiology evangelism gospel Leeds Assembly liturgy Pentecostal prayer songs theology worship