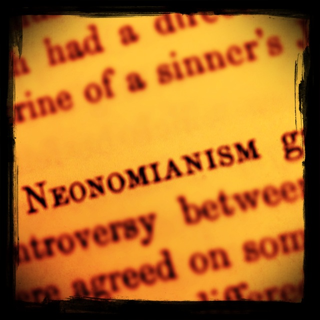 After writing last week about the big theological issues facing our churches today, several people got in touch to ask me what neonomianism is. (So I suppose that should be a lesson to me in explaining what on earth I'm talking about!) So, today I'm just writing quickly to answer that question, and to show why it matters.

Literally, neonomianism is to do with having a 'new law'. (Nomos = law, antinomianism = rejecting the law, neonomianism = having a new law.) But that still doesn't really explain what neonomianism is. So what really is it? Well, neonomianism is basically the following: Christ's death has has made us saveable, but must be coupled with our sincere, but admitedly imperfect obedience. In other words, it's a form of legalism - salvation through our obedience to the law.

Neonomianism admits that we cannot fully obey the law of God, and so argues that, through His death, Jesus has satisfied the "old Law" and brought in a "new law" or "law of grace" which doesn't demand perfect obedience on our part, but only a sincere, though imperfect, obedience. In other words, Jesus, through His death, has lowered the bar of God's law to make it easier for us to obey and merit God's favour.

Now, laid out doctrinally like that, it's clear that Neonomianism is contrary to the Bible's teaching on justification by grace alone through faith alone, in Christ alone. Neonomianism replaces the imputed righteousness of Christ with our own sincere efforts at obedience. Neonomianism makes our justification rest, not solely on Christ's work for us, but on our own work in sincerely seeking to obey the new law. Laid out like this we recognise it clearly as something contrary to the gospel of God's free grace in Christ. And yet, I encounter preachers in our circles who make statements like 'sin can only be fixed by the shed blood of Jesus Christ; that repair is only guaranteed on the basis of obedience.' (Yes, that's a direct quote, and yes that is precisely neonomianism.)

So why didn't I just say legalism? Well, I think that our ideas of legalism are often limited. We tend to associate legalism with "old-fashioned legalism", which leaves us less ready to recognise it when it creeps in in a contemporary guise. We somehow imagine that legalism only exists in suit-and-tie bedecked, hat-wearing, Sabbath-keeping, hymn-singing assemblies. And sometimes our association of legalism with old-fashioned-ness ends up with us using the word legalism to mean something else - we use it for any adherence to law or standards (particularly ones which we find old-fashioned or which we simply don't happen to like). So we call those who adhere to the old standards / biblical teaching (I'm giving both ways of looking at it here rather than taking sides, as I'm not actually writing about Sabbath-keeping or hat-wearing) on head coverings or the Lord's Day legalists, and yet I've never met anyone who believes in head covering or the observance of the Lord's Day who thinks that those things are necessary to salvation (that's what would be true legalism). So we should really be a lot more careful about how we use the word "legalism", but as we're not currently all that careful, I opted to use the word neonomianism with it's more precise meaning.

Thankfully, in the Bible, the Gospel is not a "new law" for us to work to keep through our sincere efforts. No, the Gospel is the Good News that Christ has fully obeyed the law on our behalf through His sinless life and paid for our law-breaking in His atoning death. The Gospel is not the message of what we have to sincerely try to do. No, the Gospel is the message of what Christ has already done for us. If we start to get confused here, then we simply end up loosing the gospel - and that's why neonomianism is such a dangerous matter.
Labels: justification salvation theology