Is Conservative Enough? : Some thoughts on John Frame's "The Doctrine of the Word of God", the Trinity, & Christ 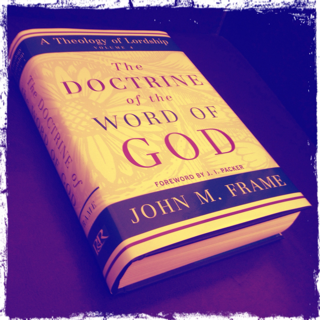 First let me say a few things. Firstly, this isn't a review. The Doctrine of the Word of God (DWG) is a big book book written by a very clever and capable theologian on a very big and important subject, so I'm not going to attempt to write a full review. Secondly, there is a lot of really good stuff in DWG. Frame not only defends key aspects of the doctrine of Scripture such as Authority, Sufficiency, and Inerrancy, but He also thinks about a lot of questions most readers have never even thought about before. Frame will certainly leave you with lots to ponder and think over. And that's good. And that's what I'm going to do a bit of in this post.

The endorsements for DWG read like a who's who of the American Conservative Evangelical world. There's Piper, Grudem, Vanhoozer, and Carson, among a host of other endorsers. And to top it all off, J.I. Packer wrote the Foreword. But I think of all the endorsements, my sentiments align most with those of Kelly M. Kapic, who writes of Frame's work, "at different times he provokes, informs, irritates, illuminates and excites. He is – thankfully – not easily categorized, and therefore he must be wrestled with and not simply embraced or dismissed." So I'm just going to write about a few ways in which he provokes an irritates, but don't read that as a complete dismissal of Frame. Just a bit of wrestling, that's all!
John Frame has a very high view of Scripture, and so do I. That means we're both conservatives. But what I'm wondering is, when it comes to a doctrine of Scripture, is conservative enough? The reason I ask is this, I wonder at times if adherence to a conservative view of Scripture can be done in such a way as to displace Christ? Now, I'm not making a closet liberal or neo-orthodox argument; I believe passionately in the necessity, sufficiency, authority and inerrancy if Scripture. Moreover, I believe in the centrality of the Word in worship and that that is how God works both to give new life and to sanctify – by His Word. I don't want to downplay Scripture in any way.

Yet, Scripture is the Word of Christ (Col. 3:16; Rom. 10:17 ESV) and is all about Christ (Luke 24:27). But, although Frame admits that Christ is the Word of God (p.48) and even that "Jesus is the mediator of all revelation" (p.307), he seems to want to dissociate the Eternal Word from the written word. To do so he does two things: 1) he identifies Word as an attribute of God, and 2) hence he ends up identifying Word with God Himself (and here he's talking about the Godhead, not about the person of the Son). Frame writes: "God's eternal inter-Trinitarian speech is a necessary divine attribute, an attribute without which God would not be God. As such, speech, like all other necessary attributes, designates the essence of God, what God really and truly is. Ultimately, God's word is God and God is his word" (p.48).

Now Frame's attempting to base this on the Trinity ("God's eternal inter-Trinitarian speech"), but it seems to me that the problem is that his view isn't sufficiently grounded in the Trinity. To borrow Frame's words "the essence of God, what God really and truly is" isn't speech, but rather Father, Son and Holy Spirit who speak to one another in love. Frame seems to replace the Trinitarian persons with the way in which they relate as who God really and truly is. (It should come as no surprise that the pages in his Doctrine of God which he references at this point in the footnotes are his section on "Simplicity".) And then this view of God (rather than the Trinity) then affects Frame's view of the Word of God.

At points he almost seems to hypostasise the Word, but yet won't identify it with Christ. So, even when writing about John 1:1, Frame seems to add the Word as well as Christ and the Father: "the passage teaches not only an identity between God and Christ, but a threefold identity between God, Christ, and the creative word. So the word is God. When we encounter the word of God, we encounter God." (p. 68). In addition to the weak Trinitarian underpinning, this may also be partly to do with his rejection of the concept of the 3-fold Word (Christ, Scripture, Proclamation – which is itself a Trinitarian concept – Word of God, Word of Christ, Word of the Spirit). Frame rejects the 3-fold Word due to some of Barth's idiosyncrasies (pp. 42, 262), however the concept of the 3-fold Word goes back to the Reformation (not just to Barth) and the Reformers expressed it in a way that doesn't have the problems of Barth's presentation. (The 3-fold Word is well known as a Lutheran concept, but was also found among the Reformed – see e.g. Michael Horton, The Christian Faith, p.136, especially note 80.) Accepting the concept of the 3-fold Word would have allowed Frame to fully hypostasise the Word without any problems, for then it would the hypostasis of the Son, not an essential attribute.

Linked to his denial of the 3-fold Word, Frame ends up downplaying preaching. He criticises the Reformers for the central place they gave to preaching (p.262-263) and turns preaching into simply the "communication of biblical content", rather than proclaiming Christ (who is offered and received in the preaching). And the displacement of Christ in favour of simply biblical content continues in Frame's approach to the Sacraments and Theology, both of which he sees as communicating "the autographic text of Scripture" (pp. 271, 279), rather than communicating Christ. Finally, the displacement of Christ by Scripture carries on into the Christian life, where Frame (explicitly rewording the Heidelberg Catechism) makes what we understand of Scripture our "only comfort in life and death", rather than Jesus Christ. I don't think anyone would question the high view of Scripture held by the writers of the Heidelberg Catechism, yet they're answer to our "only comfort in life and death" isn't what we understand of Scripture, but


"That I with body and soul, both in life and death, am not my own, but belong unto my faithful Saviour Jesus Christ; who, with his precious blood, has fully satisfied for all my sins, and delivered me from all the power of the devil"!

Plus, I know it's all the rage and everything (think Driscoll's Prophet, Priest and King leadership thing), but I just don't find Frame's triperspectivalism helpful. In fact, I think it probably contributes significantly to some of the problems (like equating the essence of God with an attribute).