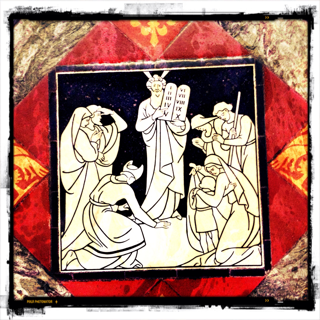 John in his gospel makes sure to get across the message that Jesus is the revelation of God. Right from the very beginning John’s making that clear, even from the first verse where He refers to Christ as the Word. And then within a few verses John is boldly declaring: ‘No one has seen God at any time. The only begotten Son, who is in the bosom of the Father, He has declared Him’ (John 1:18)! Wow! That’s a bit of a sweeping statement, isn’t it? But it’s not just John’s declaration – it’s Jesus’ too. In Chapter 14, Jesus says:


‘I am the way, the truth, and the life. No one comes to the Father except through Me. If you had known Me, you would have known My Father also; and from now on you know Him and have seen Him... He who has seen Me has seen the Father’ (John 14:6-7, 9).

Now, that’s all very well and good to say that in the New Testament. But what about people in the Old Testament (you know, people who lived before the incarnation of Christ)? There were certainly people who knew God in the Old Testament (for that’s what salvation is – John 17:3), and there were even people who saw God. Abraham (Genesis 18), Jacob (Genesis 32:30), Moses (Exodus 33:11), and Moses, Aaron, Nadab, Abihu and 70 of the elders of Israel (Exodus 24:9-11) are just a few examples from the first two books of the Old Testament of people who saw God. So how does that tie in with what Jesus and John have to say in the New Testament, that ‘no one has seen God at any time’, that only Jesus has revealed Him?

Well, Jesus answers that question Himself: ‘Your father Abraham rejoiced to see My day, and he saw it and was glad’ (John 8:56). According to Jesus, Abraham saw Him. Abraham didn’t just hear a promise of a far-off Messiah: he actually saw Him. So that’s how Abraham saw the LORD. The LORD who came and met with Abraham under the terebinth trees at Mamre was the only begotten Son who is in the bosom of the Father and who declares Him.

And Jesus doesn’t just tell us that Abraham saw him. Elsewhere in John’s Gospel, Jesus says that Moses spoke of Him (John 5:39-47) and that Isaiah saw Him (John 12:40-41). How did Moses write of Jesus. Well, let’s just take a few examples from the first half of Exodus. Moses wrote of how he met with the Angel of the LORD who spoke as the LORD at the burning bush (in other words, the LORD sent from the LORD). And he wrote about how this LORD sent from the LORD delivered the people out of Egypt (cf. Jude 5 ESV). He wrote about the presence of the Angel of the LORD with the people in the pillar of cloud by day and the pillar of fire by night. He wrote of how the people saw the glory of the LORD who heard their complaints against the LORD (Exodus 16:7) and of the LORD who stood between him and the rock and was struck so that the people might drink of the waters of life (Exodus 17:6). So, when Jesus says that Moses wrote of Him, He doesn’t just mean that Moses included the odd Messianic prophecy – No! Moses saw Him. Moses spoke with Him. And whereas Moses didn’t see the Father’s face (Exodus 33:23), He spoke with the Son ‘face to face, as a man speaks to his friend’ (Exodus 33:11). ‘No one has seen God at any time. The only begotten Son, who is in the bosom of the Father, He has declared Him’ (John 1:18)!

So, by singling out Abraham, Moses and Isaiah, Jesus shows us that, no matter who you are, no matter how great you are, He is still the only way to know the Father. There’s no other way to God that bypasses Jesus. There’s no other mighty revelation that will do instead of Jesus. Jesus is THE Revelation of God.
Labels: Angel of the LORD Exodus God the Father Jesus New Testament Old Testament revelation Word