The Other Gifts: Singleness and Marriage 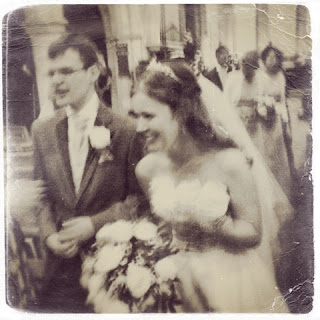 One of the seminars at Ablaze earlier in the week touched on spiritual gifts. On the screen there was a big chart showing all these gifts mentioned in the New Testament. There were the Ephesians 4 gifts, the 1 Corinthians 12 gifts, the Romans 12 gifts, and the 'Miscellaneous Passages' gifts (or as the joke ran last week, the life of Ps Black in Leeds: celibacy, voluntary poverty and martyrdom!).

So, I've been thinking since about some of those other gifts. Now, that was only a few days ago, so I haven't been thinking very long (or very hard for that matter), so what follows are only tentative thoughts, not firm dogma!

What exactly are these gifts? For, whether intentionally or not, we tend to work on assumptions about the nature of such things. Peter Wagner (not a source I often quote) gives what I think is probably the widespread assumption of a definition of the gift of celibacy: 'the gift of celibacy is the special ability that God gives to certain members of the Body of Christ to remain single and enjoy it; to be unmarried and not suffer undue sexual temptations.' I think that's how we often think. Some single people have the gift of celibacy and others don't. It's some sort of supernatural ability.

But, looking at the text, I want to disagree. I don't think that's what the gift of celibacy is at all.

1.) The text in question is 1 Corinthians 7:1-9, but particularly verse 7, which says: 'But each one has his own gift from God, one in this manner and another in that.' Verse 7 is key because it is the verse which actually refers to a 'gift' (charisma). Yet, the thing is, it doesn't refer to one gift, but two, 'one in this manner and another in that.' The context has been speaking about marriage and singleness, so those are the two gifts. (On that note, I think it's probably better to speak of a gift of singleness, rather than celibacy, given the context - the contrast with marriage, and the fact that celibacy is rather an odd word to our ears today, although singleness, biblically, of course includes celibacy.)

2.) All the other spiritual gifts in the New Testament, whether supernatural gifts or sanctified natural gifts, are given for the benefit of others. And clearly that fits for marriage: marriage is about mutuality, about loving and self-giving. Marriage (at least biblically) is other-focused rather than self-focused.

So, if celibacy were the gift of being happy and temptation free in singleness (admittedly I'm oversimplifying the definition here), it would be a gift that stands apart from all other spiritual gifts. Wagner's definition leaves celibacy as a self-focused, inward-looking gift.

3.) I slightly fear that such a view of celibacy as a special gift can sometimes lead to a downplaying of sexual sin. There could be the attitude that 'I don't have the gift of celibacy, so I can't help it' used as an excuse. I certainly see regular instances of the question: 'What about those who aren't married and don't have the gift of celibacy?' which, on at least some occasions, looks rather like an attempt at finding an excuse to use later. God's promise of a way of escape from temptation isn't only for those with a special gift, but for all Christians (1 Cor. 10:13).

4.) Not only do I fear it may lead to a downplaying of sexual sin, but I also fear that such a view can undermine our way out of temptation. Hebrews 4:14-16 teaches us that Jesus is our compassionate High Priest who brings us to the Father's throne to find mercy and grace in time of need. Verse 15 emphasizes that: 'we do not have a High Priest who cannot sympathize with our weaknesses, but was in all points tempted as we are, yet without sin.'

So, I worry that such a conception of the gift of celibacy is in danger of undoing the power of our recourse to Christ's compassion when we face temptation.

5.) Finally, I worry that such a view of the gift of celibacy allows for a shirking of the responsibilities of singleness. 1 Corinthians 7:32-33 point out the extra opportunities single people have to serve God. Married people, quite rightly, have additional important family responsibilities, yet single people don't to the same extent and so have more time for God's service. And this extra opportunity for serving God links back to Paul's example in verse 7.

The danger is, if celibacy is thought of as a special spiritual gift for just a few people, then the extra opportunities of singleness for service can be squandered simply through thinking, that doesn't apply to me, just to some super-gifted people. (A friend at university used to go on about 'eunuchs for the kingdom' - Matt. 19:12 - as those who had this special gift!)