A few thoughts from the news: The place of faith in British society 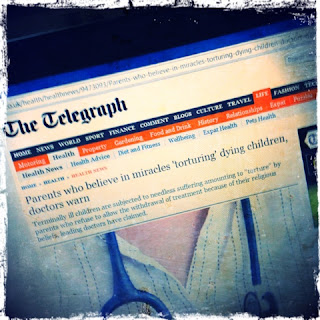 A few weeks ago the world tuned in to a display of modern-day Britain, and right in the midst of it, embedded among the scenes of the NHS, the industrial revolution, the Beatles, J.K. Rowling, Mr Bean, the world-wide web and James Bond, great hymns of faith made themselves heard. Abide With Me and Guide Me O Thou Great Jehovah rang out, as did the familiar prayer for God to save our Queen. (No doubt the organisers considered Jerusalem a hymn as well, but we'll not get into that!)

Now, I'm sure the opening ceremony of the games of the 30th Olympiad could be read in many different ways. But certainly it acknowledged that, somehow, faith (and specifically Christian faith) plays a role in the story of these isles.

Now skip on a fortnight. Today the role of faith in our society made it to the main story in the Daily Telegraph. The subject was a call from two doctors and a chaplain at Great Ormond Street for the faith of parents to stop being a 'determining factor' in court cases involving the withdrawal of treatment from children.  (I'm not going to try and summarise it, as I don't want to accidentally misrepresent the argument, so have a look at the article in the Telegraph.)

Now, the article and the arguments of the doctors therein are interesting from a number of angles, including medical ethics, pastoral care, and theology of healing. However, my reason for bringing it up today is something which normally interests me a lot less than any of those topics: namely, the place and role of faith in today's UK.

Another newspaper article that was pointed out to me today bears on the same subject. The Daily Mail reports that a Labour MP has called for the Home Secretary to ban Todd Bentley from entering the UK. Now, I really wish Todd Bentley wasn't coming to the UK. And I pray that people here aren't taken in by His nonsense. But yet, I think it would be a terrible thing to ban him.

Why? Because how does the government decide which 'religious' figures should be allowed in the country and which should be banned. Any sensible person knows that it's wrong to kick an elderly woman in the face or punch a cancer patient in the stomach. And hopefully any Christian would recognise that it's against the third commandment so to do! (Claiming God's authority for doing something ungodly is taking His name in vain.) But, where does one draw the line on whom to ban?

Perhaps they'd ban Mark Driscoll for his, to the British ear, sometimes rather harsh way of speaking and outspoken complementarianism. (Driscoll didn't do British complementarians any favours by his very un-contextualised way of speaking about the matter on that infamous interview from earlier in the year.) But if they did that, then maybe they'd ban the Archbishop of Sydney as well. After all, he too is a complementarian (even if his way of expressing it isn't as culturally insensitive in this country). And he's been prominent in the intra-Anglican debates on sexuality, being a key leader on the traditionalist side. Maybe someone will try to use equality legislation to get him banned!

You see, once it becomes acceptable to ban a 'religious' figure, the line of who's acceptable and who's not becomes fluid, and that fluidity ebbs and flows according the the whims of the Home Secretary and government of the day. The danger is that such an approach subjects faith to the Home Office.

As the hymns in the opening ceremony of the Olympics reminded us, Christian faith has played a significant role in shaping the identity of the United Kingdom. And that faith is still here today, and we are still free to practice it. And long may that freedom continue!
Labels: random musings