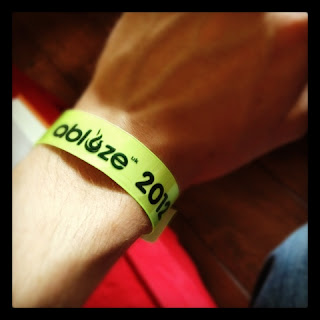 Now that convention has been and gone, it's important not to just leave it in the past and forget about it. So I want to offer a few reflections stemming from this year's Ablaze UK.

1. God does what He says He's going to do

The Lord spoke in prophecy on Tuesday night and said He was going to bring a prophetic anointing on His people - and He did. Now, we could have got in the way of that through focusing on the clock and all that needed to be fitted in to the last night; but we can't stop God doing what He says He's going to do. And if He did what He said He would in the meeting, that's just further confirmation that He really will do what He's said He will outside the convention meeting.

I think that what God did on Tuesday night through the prophetic Word, and what He says He's going to do, is the culmination of a number of prophetic words over the last year, going back to the prophecy at Ablaze last year about a shout from God coming into the fellowship (and, significantly, both that one and the one on Tuesday night spoke directly to the youth of the fellowship). God does what He says He's going to do, and so I'm confident we'll see this shout reverberate through the fellowship, that we'll see God pounce and pour out great abundance of grace, that we'll see mouths opened to speak with great confidence for Christ.

One of the best bits of convention week any year is the fellowship. There's time to spend with friends from far away. The opportunity is there to share with one another concerning the love and greatness of God. And the opportunity is there to pray with one another, and to find out how to be praying for one another after convention is over. And, of course, there are plenty of laughs over lunch or late night ice-cream (McDonald's is the new Pont Abraham).


3. Our First White Field for Harvest is within our own churches

There was good news during the week as we heard of children and teenagers coming to salvation in Christ. I'm not sure about the adults, but there may have been some saved among them too. (I was part of the prayer team during Ablaze, and that's one of the things we were prepared for.) These salvations are wonderful news; but they're also a reminder for us that the first field of harvest is within our own assemblies. We shouldn't just assume everyone's a Christian. And we should preach the gospel clearly in our churches - it's good for Christians too!

During the convention various people came to me with lots of different questions, in various contexts. And from that I learnt this: people in our churches have very real questions and are looking for very biblical answers. Sometimes people had questions because of a lack of balance in what they'd been hearing (often not in our churches - people are listening to teaching, good and bad, from way beyond the preaching they get in the local assembly). And sometimes people had questions because they had never had biblical teaching on a subject. But people wanted answers.

We can't ignore issues, or only focus on certain issues. Our people need the whole counsel of God, and we must provide them with biblical answers so that they're not left being tossed to and fro, which more often than not has a detrimental effect on their growth in grace.


5. A True Worship Leader is sensitive to the Spirit and Draws Attention to Jesus


I'm not going to say a lot about how great Olivia Crolla and the band from Whitfield were, for that would undermine the wonderful job they did. You see, while the music was of exceptionally high quality, Oliva and the band didn't draw any attention to themselves, but rather all attention was pointed to the One whom we were worshiping. And Olivia showed a great sensitivity to the Spirit in leading as well. This wasn't simply well-rehearsed, high quality music; this was true Pentecostal worship.

6. We need to pray for prayer

On Monday and Tuesday mornings there were prayer meetings before the day began. Now, this was the early early prayer meetings of years gone by - they didn't start until the fairly civilized hour of 8:45am. And while it was good to see a few hundred people there, it stood as a stark reminder that the prayer meetings in our churches are so often the most neglected of all our meetings.

It was also quite noticeable that, proportionally, people from certain assemblies and certain cultural backgrounds were much better represented at the prayer meeting than in the convention as a whole. Now, of course there are other factors, like the need for parents to look after children, as the children's work wouldn't have started for the day yet. But I came away with the impression that corporate prayer is an area in which we still need to see much growth in our churches. So, as a wise old Belgian elder used to say, 'pray for prayer.'

7. The most powerful preaching is preaching Christ

There were good speakers at the convention, and they all preached the Word. But the most powerful moments of preaching all throughout were not when people were challenged, but when Christ was preached. Yes, when people were challenged, God worked. But better than being challenged was being caught up in the glory and the grace of God and what He has done and is doing. Preaching the law has it's necessary place, but it's the preaching of the Gospel that transforms.


8. God provides for His work.

Well, I've already reported how the costs of the convention were met. As the money had already been raised, there was no collection on the last night. After that service a lady from my assembly came up to me and said, 'But pastor, people came tonight with a heart to give more!' God provides through His people for His work.

9. It was nice to meet some of you blog readers.

Finally I really enjoyed meeting some of the readers of this blog. And not only from the UK. It's quite strange when being introduced to someone from a far away country to have them reply, 'Ah, you're the one who writes the blog!' Some of you I got to say hello to, others I got to get to know a bit more, and a few pastors told me what not to write in this blog (let's just say the secrets of the ceilidh stay in the ceilidh, but if you missed out on that most fun of convention after-hours events, you'll just have to make sure you hang around for it next year).

Well, I think this then is that last official Ablaze post. However I've come away from Ablaze with some further thoughts that will probably make it into the blog before long.
Labels: AblazeUK Apostolic Church