Does this remind you of anyone? 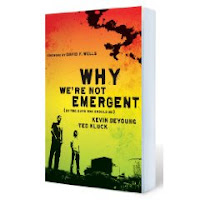 This quotation from Why We're Not Emergent (By Two Guys Who Should Be) doesn't make any profound theological observations, but it is one of the paragraphs I have most enjoyed reading of late.

At any rate, my friend David is more than eager to talk about postmodernism, emergent, theology, and the like. I think every church probably has a David or two - he is the rare college student who is passionate about theology, and feels a little bit like an outsider because of it. I wouldn't go so far as to put him in the "rabid young John Piper groupies" department, but if he met a beautiful young girl wearing glasses, no makeup, and an indie-rock T-shirt, reading Calvin's Institutes, he probably wouldn't hesitate to ask her to "court".

Kevin DeYoung and Ted Kluck, Why We're Not Emergent (By Two Guys Who Should Be) (Chicago: Moody, 2008), 99.
Labels: books random musings