The Incarnation: 'He became what we are so that we might become what He is' 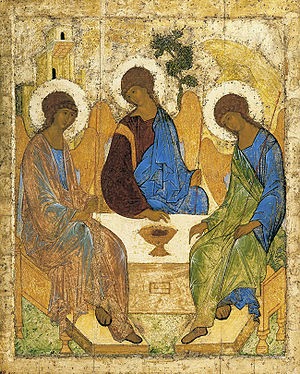 Why did the Word become flesh and dwell among us? What was the reason for the Incarnation? Doesn’t the Bible say that it was to destroy all the works of the evil one? (1 John 3:8). Yes. But that’s not all the Bible has to say on the matter. Jesus shared our flesh and blood not only to ‘destroy him who had the power of death, that is, the devil’, but also ‘release those who through fear of death were all their lifetime subject to bondage’ (Hebrews 2:14-15). As the Nicene Creed puts it, it was ‘for us … and for our salvation’ that He ‘came down from heaven, and was incarnate by the Holy Ghost of the Virgin Mary, and was made man.’

But what does this salvation for us, for which Christ became incarnate, look like? Galatians 4:4-5 notes two parts to it: ‘God sent forth His Son, born of a woman, born under the law, to redeem those who were under the law, that we might receive the adoption as sons.’ Redemption and Adoption. That’s why Jesus came. That’s why the Incarnation happened. For us and for our salvation, through Redemption and Adoption. But notice this: the Redemption leads on to the Adoption. Christ has redeemed us in order that we might receive the adoption as sons. So often our focus is on the great Redemption we have in Jesus, and yet Paul writes that, great as our Redemption is, it leads to something even greater: our Adoption as sons.

Perhaps sometimes our lack of focus on the great truth of Adoption is because we often reduce it to legal terms, as a mere change of status. But in Galatians 4, Paul makes very clear that this is no mere legal procedure. This Adoption leads to us knowing (and loving) God as our Father. This Adoption leads to the gift of the Holy Spirit who pours out the love of the Father in our hearts (cf. Rom. 5:5). Rather than a mere legal status change, this Adoption is all about being received into the loving relationships of our new family – the Triune God.

Many writers in the early church wanted to emphasise this glorious truth of being brought right into the loving fellowship of the Father, Son and Holy Spirit. Irenaeus of Lyons put it like this:

Irenaeus wasn’t alone here. Athanasius the Great, the champion defender of the deity of Christ against the Arians, said pretty much the same thing. Yet it sounds a bit odd to us today. How could we become what Jesus is? He’s God! So were Irenaeus and Athanasius saying that we get turned into God?!?

Well, not really. Think of it like this: what is Jesus? He’s the Son of God. And through Him we become sons of God. So we become what He is. But He is the Only-Begotten Son; we are sons by adoption and grace. Again, what it Jesus? He is the Christ, the Anointed One. And in Him we are anointed with His anointing. He is the One who has the Spirit without measure; we receive His Spirit, the Spirit of Adoption, from Him, by grace.

So, when Athanasius’ version of the theologoumenon is often translated ‘He became man so that we might become god’, it’s not saying we get turned into God, but rather it’s echoing the language of Psalm 82 to say that, by grace, in Christ, we are made like God the Son and conformed to His image. He is divine by nature, yet by grace we are made ‘partakers of the divine nature’ (2 Pet. 1:4).

Now, maybe that sounds rather odd, maybe even alarming. But think about this: what is the divine nature? It might sound a bit abstract to talk of ‘the divine nature’, but it’s simply the nature of God, and so that means the nature of the Triune God. And the nature of the Triune God is to always exist in the loving relationship of Father, Son and Holy Spirit. So when the Bible says we’ve become partakers of the divine nature, it’s not saying that our humanity is somehow transformed into divinity – far from it! It’s saying that we’ve been brought into this everlasting, loving relationship between the Father, Son and Holy Spirit. We are united to Christ, and in Him, we now share His relationship with His Father. The Father loves us with the very same love which He has for His Son. We are now sons in the Son – which was what the Bible was talking about back in Galatians where we read about how Jesus became incarnate for our adoption as sons.