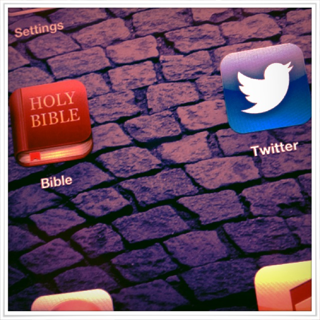 Okay, I've had to start writing this post over again. I was getting too riled up, and really don't want to rant. So, in lieu thereof, here's a post from almost exactly two years ago provoked by the almost exactly the same thing. But first, a quick rebuttle (sans rant) of what's got me so riled up this time

Are God's Favour and Blessing on the Other Side of Our Obedience?

Certainly Not!! God's blessing is found in Jesus: the Father 'has blessed us with every spiritual blessing in the heavenly places in Christ' (Eph. 1:3). And in Ephesians 1 that blessing which is ours in Christ (and in Christ alone) is linked to us being chosen 'in Him before the foundation of the world' (Eph. 1:4), so long before we ever did anything to obey! Paul makes it very clear in Ephesians 1 that our blessing in Christ rests solely upon the grace of God which we receive in Christ and Him crucified. God's favour and blessing are ours because of the shed blood of Jesus, not because of any obedience of our own. We rely on Jesus' blood and righteousness, not our own efforts at obedience.

The word the New Testament normally uses to speak of Gods' favour is grace. And Paul tells us very clearly that grace and attempting to gain God's blessings by working for them (through obedience) don't go together. 'Now to him who works, the wages are not counted as grace but as debt. But to Him who does not work but believes on Him who justifies the ungodly, his faith is accounted for righteousness ... For if those who are of the law are heirs, faith is made void and the promise of no effect, because the law brings about wrath' (Rom. 4:4-5, 14-15).

To say that 'God's favor and blessing are on the other side of our obedience' is simply neonomianism or semi-pelagianism. (And by the way, semi-pelagianism is a formal heresy - by which I mean, not something that I don't like so I'm going to call "heresy" - which should never be done -, but something which has actually formally been declared an official heresy by Church Councils and so is recognised as heretical by the universal church.)

Okay, that's enough before I get too riled up. So here's something much better from two years ago.

Then, tired on a Friday evening, and saddened by listening to the 6 o'clock news, I thought I'd distract myself by having a quick check of Twitter. (When will I learn?)

Now, Twitter, in many ways, is a bad medium for theology (although, if you want to see it used well theologically follow Glen Scrivener — @glenscrivener —who in 140 characters or less will point you to the riches of Christ in whom you can #enjoyyourday). Twitter's weaknesses as a theological medium are simply that 140 characters limits context, clarification and nuance. So it's undoubtedly easy to be misunderstood. (That, however shouldn't be all that big a surprise to preachers as it's not unheard of for someone to misunderstand a phrase taken out of context even in the midst of a full sermon.)

Twitter is also very public. It's not the same as making an off the cuff remark to a few friends who know exactly what you really mean. Now, most of us are rather obscure and not too many people are going to notice what we ever tweet. But there are some people with high profiles and broad platforms, and such people should be extra careful.

You see, the same bad theology that had caused the damage I'd been hearing about earlier in the day had suddenly popped up on the screen of my phone when I looked at Twitter.

Now, I'm not all that naïve. I'm sure there's tons of bad theology on Twitter (I just tend not to follow many bad theologians). I'm not about to go on a one man crusade to rid the Twittersphere of all bad teaching. This bad theology hit me though, both because of the damage I'd heard about earlier in the day, and because of its source, which was both close to home and prominent. (For some reason, the closer to home it is, the more upset I get by bad theology.)

What was this bad theology? (By the way, don't hang around waiting for me to reveal its source, for that simply isn't going to happen.) It was this:


“Knowing the ways of God and walking in them bring us closer to knowing Jesus.”

Now, that isn't some new idea floating about. (By the way, at this point I'd just like to be extra careful and refer to my earlier remarks about lack of context and ease of misunderstanding on Twitter — in other words, I hope and pray the tweeter didn't mean what he ended up saying; hopefully his intentions were highly orthodox.) Now, back to what I was saying. No, this is no new idea. This idea was floating about back in the days of the New Testament as well. We know that because we read about it. Especially in Galatians.

But in Galatians this idea isn't being taught — it's being fought against. This is what the Judaizers were teaching, not the apostle Paul.

The Judaizers thought that if people wanted to know Jesus, then they would first have to know God's ways and walk in then. For them that meant becoming a Jew and keeping the Old Testament law. They wanted Gentiles to be circumcised to bring them closer to knowing Jesus.

And that's dangerous, because it's the opposite of the gospel. For the gospel isn't about something that we do; it's all about what Jesus has done!

Saying that walking in God's ways brings us closer to knowing Jesus is not the gospel. Knowing Jesus is eternal life (John 17:3). He freely offers us life as He offers Himself to us. We don't need to do something to bring us closer. After all, this is the time of year when we're celebrating the fact that He has drawn close; the Word became flesh. He entered in to our world of suffering and sin to lay hold of us, rescue us and welcome us into the loving fellowship of the Father, Son and Holy Spirit. He's the One who's brought Himself near to us, and so we don't need to do something to bring about that nearness. We simply embrace Jesus Christ as He is offered to us in the Gospel.

Saying that walking in God's ways brings us nearer to Christ diminishes Christ's work for us and it also diminishes sin. If I can just decide to walk in God's ways and do so, then sin can't be all that powerful. That's what everyone's favourite heretic Pelagius said, that sin was simply Adam's bad example which we all inevitably follow, but that if we are given knowledge of God's ways, we can decide to walk in them and so be saved. The problem with that is it simply isn't what the Bible teaches us about sin!

Sin isn't simply a bad example we all follow. Rather, we are all born guilty of sin because we all sinned in Adam (Romans 5:12-19). In Adam we stand condemned, so what we need is someone to take us out of Adam and unite us to a new Head. And that's what the Holy Spirit does to us in salvation (Romans 8:9-11) — He unites us to Christ, who Himself is our righteousness (Romans 5:19). The sin problem isn't in our actions, it's in our nature. And the solution to the sin problem isn't in us deciding to live God's way, it's the gracious work of the Triune God for us. The Father sent Christ who lived, died and rose for us, and to whom we are united by the Spirit.

So, how does the bad theology damage people? Well, in a number of ways.

1) People can end up putting their trust in the wrong thing.

2) People can end up being crushed by the weight of expectations placed on their shoulders.

Other people do trust in Jesus, but they still keep hearing “try harder”. It might be put as a negative reprimand, or it might be put as a positive “challenge”, but either way, all they hear is, “you're not doing well enough — you must do better”. And so rather than being sent continually to Christ for forgiveness, peace and rest, rather than enjoying the victory that He has already won for them, they end up living with a sense of not being good enough. Rather than knowing the gracious presence of God in Christ, they end up thinking that drawing near to God and enjoying His presence is an impossible challenge reserved only for the extra specially holy people!

You see, these people realise that walking in God's ways is a huge thing. They realise the seriousness of sin and the holiness of God, and they see the gap. But instead of being told of Christ who has drawn near through His incarnation and Cross and who has united us to Himself in salvation, all they hear is “try harder, do better.” It may not be the message that anyone intends to communicate, but it's the message that so many hear, and that causes so much damage.

3) People can end up being driven away by the hypocrisy that stems from shallow understandings of sin.

Shallow understandings of sin, like thinking of it simply as choices we make or which we can decide not to make, also have a tendency to lead to hypocrisy. You see, if people think that they have made a decision to walk in God's ways and are managing to do it, they must not be noticing at least some sin in their lives (1 John 1:8). Other people, however, probably are noticing, and instead of seeing wonderful followers of Christ, they end up seeing hypocrisy. And nothing puts people off listening to Christians share the gospel message like hypocrisy. So many people have told me they stopped going to church because of that sort of hypocrisy. Praise God, some of them are back and rejoicing in the fact that the gospel is all about what Christ has done, not about what we do. But, sadly, others stay away.

So, let me make a plea. Be careful not to tweet some bad theology. But even more importantly, take care that the message you preach week in week out isn't a damaging one, but rather the only one which is “the power of God unto salvation” (Romans 1:17).

Now, for something much more positive and edifying, go and read about the Incarnation instead!
Labels: Cross doctrine gospel Jesus justification law and gospel salvation sin Tenets theology