What does it actually mean for God to come down or rise up? 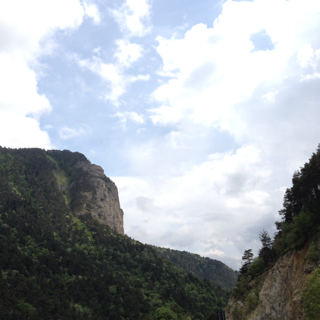 Now, perhaps you think I was a bit too harsh on a chorus the other day. After all, it’s tagged onto one of the great hymns of the Incarnation. But, apart from (as I’ve already mentioned) distracting us from the great truth of the Incarnate Christ of which we sing in the verses, what do the words actually mean?

For a start, this is Old Testament language. The New Testament never speaks of God rising up – apart from Christ’s rising up in His resurrection from the dead. The New Testament never speaks of God coming down – apart from Christ’s coming down in the Incarnation (John 6:33, 38, 42, 50). And both of those events have already taken place, so we can’t be calling on God to perform them now. So these expressions can’t be being used in a New Testament way, and that suggests they must be being used in an Old Testament way.

So, what we see is that the Old Testament uses the language of God rising up to speak of Him acting in His wrath and judgment against sin. Yet it can also occasionally use the same language to speak of how He brings salvation to His people (something there was a hint of with the ‘coming down’ language as well).

Both the coming down and the rising up language, then, are used very similarly: of God acting in judgment and yet also of God acting to save. And yet in both cases, the judgment and the salvation can go together (e.g. Isa. 31:4; Ps. 10:12; 12:5). So this is God’s intervention to bring redemption to His people through pouring out His wrath in judgment.

In other words, the Psalms and prophets are looking forward to the Cross of the Incarnate Saviour. That’s why we don’t get this language in the New Testament, for God has already come down and risen up in the coming of Jesus Christ in Incarnation and Atonement. In Jesus, God has intervened to deliver us safely through the outpouring of His just wrath in judgment. So there’s no need for us to call out to God to rise up or come down now – He already has. Instead we’re called to look back to the manger, the Cross and the empty tomb, trusting in what He has already accomplished for us and for our salvation in the life, death and resurrection of Jesus.

Calling on God to rise up or to come down in the Old Testament was how people called on Him to pour out His wrath in judgment (so think about that next time you sing a worship song that uses such language). Yet it was also a way of calling for Him to bring salvation through judgment. And that He has already done for us in Jesus. So, if you really want to sing biblically about God coming down and rising up, sing of Jesus – sing of His Incarnation, sing of His death for our sins, and sing of His resurrection from the grave. Sing with joy, for God has already come down and risen up.
Labels: atonement incarnation Jesus Old Testament resurrection worship