Christ’s Seamless Garment, Our Spotless Robe, and the Unity of the Church 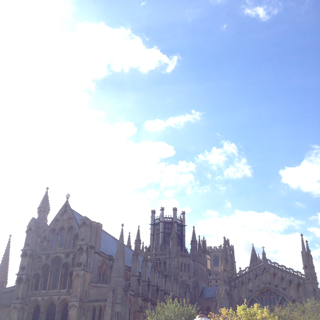 Sometimes the Church Fathers remind me very much of the Pentecostalism of my youth. That might sound a bit odd – after all, Pentecostalism and the Church Fathers don’t often go together – but hear me out. You see, in both the Church Fathers and in older (British and European) Pentecostal preaching the great desire is to see Christ in all the Scriptures. Which means that sometimes those who have been taught to follow very strict rules of ‘literal grammatical historical’ interpretation bristle against some of the places Jesus is found by both the Church Fathers and the older Pentecostals. (I’m saying older Pentecostals here, as there is a newer approach which, alas, seems to have gone a long way toward replacing it.) Some people will brush both the Fathers and the Pentecostals aside with accusations of allegory, but the thing is this, despite the way some of their interpretations might appear incredibly novel to certain schools of evangelicalism, a lot of what they said was both (a) deeply rooted in Scripture, and (b) said with the overwhelming desire of proclaiming Christ.

Anyway, I was thinking about this as I was reading Cyprian of Carthage’s De Unitate (On the Unity of the Church) the other week. You see, Cyprian has this glorious insight connected with Christ’s seamless robe and how the soldiers cast lots for it rather than divide it. I don’t think I’ve ever heard a sermon on Christ’s seamless robe. I can’t even imagine how an evangelical sermon would be preached on it. It might just briefly be mentioned as a fulfilment of prophecy. And yet it’s a detail that’s mentioned in each of the four gospels. (Just think – Jesus’ cry of ‘It is finished’ is only mentioned in one gospel! – John 19:30.)

Cyprian’s interest isn’t in the fulfilment of prophecy in the seamless robe, but instead he sees the robe itself as prophetic and pointing forward to an immensely important truth for Christians. For Cyprian, this isn’t merely a garment for someone to wear; this is the robe of Christ and so just as Christ’s actions were significant and teach us, so was His robe. For Christians, you see, are clothed with the robe of Christ. (After all, don’t we sing of ‘this spotless robe’, of our ‘beauteous dress’, and of being ‘clothed with righteousness divine’?) And so it seems that Cyprian reckons that, if we are clothed with Christ’s robe, then we can learn something about our clothing from the description of that robe which He wore on earth.

And what do we learn from the description of that robe? That it was seamless and even the soldiers didn’t divide it. So here’s what Cyprian had to say:


When someone would be clothed with Christ, he receives a perfect suit of clothing, and an undamaged tunic. But what comes into his possession is common property… Christ was wearing the unity that proceeds ‘from the upper part’ (that means ‘proceeding from heaven and from the Father’), which could never at all be torn apart by him who receives and possesses it, but rather with it secures for himself something that has a firm integrity. He who rends and splits Christ’s Church cannot possess Christ’s robe …

So truly because Christ’s people cannot be torn apart, his tunic, ‘woven without seam,’ and holding fast together, has not become divided amongst its owners. The description ‘unable to be split (united, linked together),’ reveals the concord that holds together the unity of our people who have put on Christ. By the sign and seal of the tunic Christ has declared the unity of his Church.

So, see what Cyprian’s saying. Christ’s robe cannot be divided. When we’re saved, we’re clothed in His robe of righteousness. But there is only one robe – not one for each of us. We all share in the one robe of Christ. And therefore the indivisibility of the robe points to the indivisibility of the Church, for the whole Church is clothed together in this single robe of Christ’s righteousness.

Now, Cyprian’s not just making stuff up off the top of his head. Already there you can see that his thought is steeped in the biblical language of being clothed with righteousness and salvation (e.g. Isa. 61:10). But he also looks back to the Old Testament to see the prophetic significance of the dividing of a garment, when the prophet Ahijah tore his robe in 12 pieces before Jeroboam to signify the division of the kingdom (1 Kings 11:29-39). These might not be the first passages of Scripture our minds would jump to when we read of the soldiers casting lots for Christ’s robe so as not to divide it, but they certainly show us that Cyprian’s thinking is deeply saturated with Scripture here.

When I first read this connection of Cyprian’s, I got really excited. This is glorious, Christ exalting truth, seen in some soldiers casting lots for a robe. And it reminds us that the unity of the Church isn’t found in us – it’s not something for us to try to create. No, the unity of the Church is found in Christ and His righteousness with which we are all together clothed.