The Ascension and Church Government 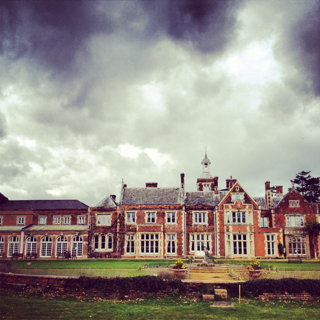 (I wrote this post before going to May Council this week, but didn't have time to post it. So here it is now, and that explains why it's talking about something that happened during the week as if it's yet to happen.)

This week is May Council, which in the Apostolic Church means a week of church government. And so apostles, prophets, evangelists, pastors and teachers gather together in a room in the English countryside. Now, you could just look at it that way – a bunch of men spending a week in a room discussing and deciding things. And that bit is very true and should never be forgotten. (May Council is not some strange mystical experience.) But yet it’s also much more than that.

This week I’m going to heaven. That might sound a bit overly dramatic, but it’s true. Now that’s not to say that May Council week is a week of blissful paradise – it generally isn’t. There can be ultra-late-night discussions that need decisions, boring moments, frustrations, and stresses. It’s generally a week of hard work, not simply a few days away. And I’ve already said that it isn’t some strange mystical experience. So how on earth can I say I’m going to heaven at May Council? Because of the Ascension of Christ, that’s how.

I’m not physically ascending to heaven this week (I think I’m going to Northamptonshire). But the government of Christ’s Church takes place in heaven. For that’s where Jesus is, and He’s the Head of the Church. You see, the Ascension doesn’t mean that Christ has abdicated from governing His Body and left it to us in His absence. Far from it! The Ascension means that the Church doesn’t rely on earthly power and government, but on Christ’s in heaven.

Okay, maybe I was a bit dramatic when I said that I was going to heaven this week – because, actually I’m already there, for God has ‘raised us up together, and made us sit together in the heavenly places in Christ Jesus’ (Eph. 2:6). Through faith, we have been united to Christ, not only in His death and resurrection, but in His ascension as well. He has ascended for us, and we ascend in Him. Later on in Ephesians, Paul describes this ascension dynamic in relation to the ministers Christ has given in His Church. It is ‘when He ascended on high [that] He led captivity captive and gave gifts to men … And He Himself gave some to be apostles, some prophets, some evangelists, some pastors and teachers’ (Eph. 4:8, 11).

Now, we know that. We even refer to the five-fold ministries of Ephesians 4:11 as ‘ascension ministers’ and the technical name for May Council these days is the Ascension Ministries Council. But if the ministers Christ has given to govern His Church are gifts of His ascension, and if we are all united to Christ in His ascension and seated with Him in the heavenly realms, then that has an impact on the very government of the Church.

You see, Church government isn’t merely a pragmatic affair. It’s something deeply theological. It’s not simply about decision-making, but about the expression of the Headship of Jesus Christ in His Church. Before we started calling them ‘ascension ministries’, we used to call them ‘headship ministries’, because through their ministry in preaching the Word, administering the Sacraments and governing the Church, Christ the Head expresses His Headship. The ministers of the church do not govern in the place of Christ (as if Christ is somehow absent and they simply have to get on with it somehow). No; Christ Himself governs His Church through His ministers.

And that should affect how we think about what’s going on in Council (and in Pastors’ Meetings and Presbytery Meetings as well). You see, we can be tempted to take a very pragmatic approach. We think: there are x number of decisions that need to be made, so what’s the most effective way to get it done. And it can generally be admitted that sitting down a large number of men in a deliberative Council is not the fastest and most efficient way of making decisions. But if we see church government for what it really is – Christ governing His Church through the gifts He has given – then we can see that it’s not supposed to be about finding that quickest and most efficient method of decision making.

Perhaps even the way we talk about ‘decision making’ can mislead us. For in fact, it’s not about men making decisions, but rather, about having the mind of Christ. That means that church government can never be about winning votes! But how can we have the mind of Christ in the government of His Church? W.A.C. Rowe puts it like this: ‘There should be … a holy zeal for the Scriptures as the standard of truth; a sensitiveness to the movement of the Holy Spirit in supernatural ministry within our own spirits and by the gifts and offices and a steadfast beholding and holding of the ascended Head.’ (One Lord, One Faith, p.245). There you go – the authority of Scripture above all, sensitivity to the Spirit, and looking to Jesus, that’s the attitude we should have in Council, Pastors’ Meeting, and Presbytery.

This means that we cannot rely on our own attempts at organising and decision making. That’s why, although committees are necessary in undertaking work for Council, reporting to Council, and answering the questions of Council, the actual government cannot be delegated to committees. Rowe again:


Each gift and office is a means of expression for the ministry and government of Christ, the living Head … Man’s well intentioned tendency is to rule out the supernatural, set up an organisation, appoint officers giving them different names and activities, and then expect the Lord to do the rest. No! He requires instruments of His own design and designation “set” according to His own perfect will. (One Lord, One Faith, p.245).


Christ is the Head, and the Church only exists for Him and through Him. So everything in the Church should point us to Him:


this type of government … naturally leads the Church to look to God and not to man. It exalts the Christ in the expected practical outworking of His Headship. He is in very truth seen to be a living Lord always longing to lead and guide His people. This is a mode that humbles the minister, in that he is only the channel and not the originator of the revelation and direction. (One Lord, One Faith, p.246)

This is the sort of church government that takes place in heaven, relying upon the ascension of Jesus.
Labels: Apostolic Church Ascension Ascension Ministries ecclesiology May Council ministry theology