He Received Death for Us 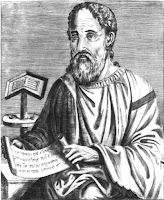 'And the Lamb of God ... was chastised on our behalf, and suffered a penalty He did not owe, but which we owed because of the multitude of our sins; and so He became the cause of the forgiveness of our sins, because He received death for us, and transferred to Himself the scourging, the insults, and the dishonour, which were due to us, and drew down upon Himself the appointed curse, being made a curse for us.'