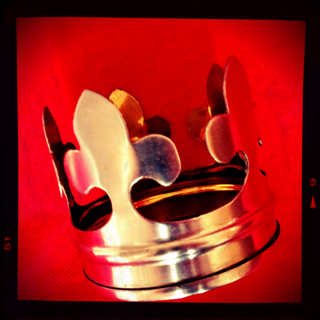 In Psalm 1 we met Jesus as the Righteous Man, our Representative and Substitute, to whom we're united, and in whom we bear fruit. Now in Psalm 2 we meet Him as the Lord's Anointed (Ps 2:2) and as the Son (vv. 7, 12).

And sometimes we can be tempted to buy into their perspective too. Instead of realising that 'if the Son makes you free you shall be free indeed' (Jn 8:36) and recognising that His 'yoke is easy and [His] burden is light' (Mt 11:30), we can foolishly cherish the sins we don't want to be free from, confusing them with 'freedom'. Through these rose-tinted spectacles, we confuse slavery with freedom, and then all too easily join the chorus of the raging nations, as we grumble against the Lord and against His Anointed (His Christ), saying 'let us break Their bonds in pieces and cast away Their cords from us' (Ps 2:3).

Yet the Lord laughs at our petty revolts. What's His response? 'I have set My King on My holy hill of Zion' (v.6). This is His voice of 'wrath' and 'displeasure', says the Psalm (v.5): a King on a hill. It's the King we've already met in this Psalm as the Lord's Anointed and in the previous Psalm as the One who does perfectly what all biblical Kings were called to do (i.e. meditate in God's Word day and night — have a look at Deut. 17:18-19). In His wrath and displeasure against those who rage against Him in rebellion, the Lord sends His perfect King, His Anointed Christ, His Son to a hill. To Zion's hill. To Jerusalem.

But fast forward from the Psalms to the Gospels. What do we see when this perfect King, Jesus Christ God's Son arrives in Jerusalem? He doesn't come leading a devastating army to crush the rebellion. No, He comes 'lowly, and sitting on a donkey' (Mt 21:5). He comes in peace, and yet is seized by 'the rulers [who] take counsel together, against the LORD and against His Anointed' (Ps 2:2). They nail Him to a cross on a hill, and there God speaks 'in His wrath' and 'His deep displeasure' not to those who nailed Christ to the cross, but against their sin and our sin as Jesus 'bore our own sins in His body on the tree' (1 Pet. 2:24). In His wrath and displeasure, God speaks His 'No' to sin (both theirs and ours) in the sacrificial death of Jesus 'who knew no sin' yet was made 'to be sin for us' (2 Cor. 5:21). And at the same time, through that same sacrifice, God speaks forgiveness and welcome, for we hear it in the voice of the Son, who dying for us on the cross prayed, 'Father, forgive them' (Lk 23:34).

This is how God speaks in His wrath to those who rage in rebellion against Him (which includes every one of us, for none of us are righteous). Not with an unalterable word of immediate condemnation, but instead by condemning sin in the flesh of Jesus given for us on the Cross (Rom. 8:3), and in the Crucified King lifted up from the earth on that holy hill, holding out to us forgiveness (Lk 23:34), peace (Ps 1), wisdom (Ps 2:10), and blessing (Ps 2:12).

Through the death and resurrection of the Anointed, Crucified King who is the Son (for Acts 13:33-34 tells us that verse 7 is speaking of Christ's resurrection), the nations are transformed from raging rebellion, to the possession and inheritance of Christ (Ps 2:7-9); those who took foolish counsel together are made wise (Ps 2:10), and those who sought to cast off the Lord's yoke now serve Him with godly fear and rejoicing (Ps 2:11).

Blessing is found in this Crucified and Risen King (v.12) and only in Him. While in our rebellion and sin we thought we could create blessing for ourselves by shaking off His yoke (v.3), now through the Cross and Resurrection of Jesus we see that that wasn't true blessing at all. The real blessing isn't found in running from Him, but in running to Him: not in shaking our fists at Him, but in kissing the Son, and thus discovering that, indeed, 'blessed are all those who put their trust in Him' (v.12).

O Lord, our Father, who sits in the heavens, we confess our sin when we try to cast away your cords from us. For through the death and resurrection of Your Son, You draw us to You with gentle cords, with bands of love. We give You thanks and praise that You have set Your Son as King upon Your holy hill at Calvary. May we always delight in His reign as King in our hearts and lives. We thank You that You have given us to Him, and that in Him we find Your wisdom and blessing. Fill us with godly fear, that we may always rejoice to kiss the Son and serve You, our God, in the freedom You have given us in Him. Amen.


And here's Psalm 2 pointed for singing.