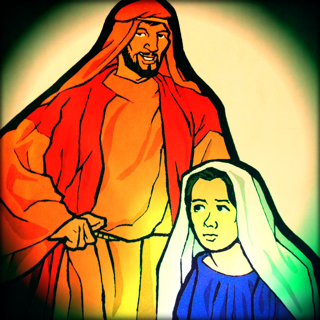 Time for a seasonally appropriate re-post —

December is fast approaching [actually it's already here, but as I said, this is a re-post], and with it the one time of the year when we evangelicals tend to mention Mary. For how could we speak of the Nativity without speaking of the Blessed Virgin? And yet, so often as I hear Mary mentioned in the run up to Christmas, I sink a little in my seat, for, you see, not only do we evangelicals keep Mary for December, but often we get so nervous when we bring her out for that brief cameo, that we end up jumping straight from Mary to accidental heresies.

Ironically, it’s the fear of heresy that leads into heresy on this particular subject. Now, I come from Northern Ireland, so this is perhaps slightly more pronounced there given the general consciousness of Roman Catholic attitudes to Mary, but I’ve heard it on the mainland and further afield as well. It seems that, when we evangelicals talk about Mary, suddenly a huge desire to distinguish ourselves from Popery kicks in. And so suddenly asides and excurses are fitted panickedly into sermons loudly declaring that Mary is NOT the Mother of God. The only problem with that is that she is!

If we say that Mary is not the Mother of God, then what we end up saying is that Jesus is not God. (And no good evangelical wants to say that!) The early church recognised this, and so when the Archbishop of Constantinople refused to call Mary Theotokos (God-bearer – the Greek equivalent of Mother of God), a major crisis broke out that ended up leading to a few major Church Councils to defend the truth that the one born of Mary is God the Son.

Cyril of Alexandria, the great defender of orthodoxy in that controversy (and one of the greatest teachers on the doctrine of the person of Christ in the history of the Church) even wrote a book Against Those Who Are Unwilling To Confess That The Holy Virgin Is Theotokos. What was the book about? Not Mary. It was all about Jesus! For Cyril,Theotokos (God-Bearer) or Mother of God wasn’t a title on which to establish a Mariology; rather, it was an essential title for a true Christology. As Cyril wrote to the Monks of Egypt at the outset of the controversy:

But for Cyril, it wasn’t only essential to agree that Mary is the Mother of God because it’s a vital Christological teaching, but also because he insisted that it’s the biblical thing to say. He points to three particular Scriptures: Luke 1:41-43; Luke 2:11-12; and Isa. 7:14 quoted in Matthew 1:23.

In Luke 2:11-12 the Angels announce the birth of Jesus to the shepherds. But who do they say is born? ‘A Saviour who is Christ the Lord.’ Like Elizabeth, the angels insist that the one born of Mary is the LORD himself.

Finally, in Matthew 1:23, Matthew quotes Isaiah, writing: ‘“Behold, the virgin shall be with child, and bear a Son, and they shall call His name Immanuel,” which is translated, “God with us.”’ In his Scholia on the Incarnation, Cyril argues that ‘God with us’ ‘signifies that the Word (true God of true God) came in our nature on account of flesh’ and so the Son borne by Mary ‘was God in the flesh, and she who gave him a fleshly birth in accordance with the flesh was truly the Mother of God’ (Cyril, Scholia, §27). So, to say that Mary is the mother of Immanuel (as Matthew 1:23 and Isaiah 7:14 both say) is to say that she is the mother of God.

The Church eventually resolved the controversy. The Archbishop of Constantinople in question was deposed, condemned for heresy, and anathamatised. And it is the settled doctrine of the Christian Church that ‘if anyone does not confess the Immanuel to be truly God, and hence the holy virgin to be Mother of God (for she gave birth in the flesh to the Word of God made flesh), let him be anathema.’ (No. 1 of the Twelve Chapters of Cyril, formally accepted as the standard of orthodoxy at the Second Council of Constantinople).

So, Mary is the Mother of God. We say that because: 1) to say otherwise is to say that Jesus isn’t God, 2) it’s a biblical thing to say, and 3) it’s the settled, orthodox doctrine of the entire Christian church. So this year, in the run-up to Christmas, don’t go round explaining how Mary isn’t the Mother of God. Instead, thank God that she is, because that means God really has come down to us for our salvation.

P.S. By the way, if you're an Apostolic, let me just draw your attention to Tenet 3. We believe in 'the virgin birth ... of our Lord Jesus Christ', thus the One who is born of the virgin is Lord and thus God. Ergo Mary is the mother of God, and to say otherwise is also to contradict the Tenets (which is of course a much weaker argument than those above, but it does show that it is Apostolic to say that Mary is the Mother of God, and un-Apostolic to say otherwise).
Labels: Christology Church Fathers doctrine incarnation Jesus New Testament Tenets theology