Apostleship, Communion and Unity (Part 2): From Bradford to the World 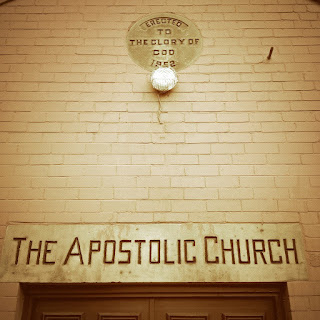 How do churches share communion (fellowship) when they’re divided by language or geography? How can English-speaking Yorkshire churches be ‘in communion’ with Latvian/Romani/Russian speaking churches in Yorkshire? How can Yorkshire churches share communion with churches in the Scottish Highlands, the Welsh Valleys, or across the sea in Northern Ireland, when few of our members have ever been either that far north or west? If you’ve read Part 1, you might not be surprised to hear that my answer is going to be something to do with apostleship.

In Part 1, we were thinking about apostles as a ‘focus and sign of unity’ among the churches of an Area. But the connection between apostleship and communion doesn’t only apply internally within the life of the Area churches, but also externally, between the churches of the Area and the wider church. (We were using the Bradford Area as our test case last time, so we’ll continue to use it today.)

Now, the first hypothetical above isn’t really hypothetical at all; communion between English-speaking assemblies and Latvian/Romani/Russian-speaking assemblies is a real issue here. Here in our Area, we have a group of Latvian Romani churches affiliated to the Apostolic Church. In church they speak Latvian, Russian and Romani, so, although someone will translate to English for us if any of us are there, the difference in language means we don’t have a lot of joint events (although we did manage a combined multi-lingual baptismal service last Easter Sunday in Leeds). Yet, we’re still in communion with each other, despite our language differences.

But how do we ensure that that’s a real communion and not just one on paper? That’s a question which our Area Apostle took to heart, and in the solution, he has in a way become the embodiment of that communion.

So, practically, how do we maintain our communion? Well, every other Friday our Area Apostle and I go down to Wombwell (a town in which we have both an English assembly and a Latvian one in the same building) to meet with the Latvian pastor and leaders (along with an elder from our English assembly in the town) to pray together. We spend some time together. We hear the news of what’s happening in their churches. Sometimes we’re able to help with something practical (e.g. recently they were planting a church in a new town, so we were able to put them in touch with our pastor there to get somewhere for them to meet). Sometimes there is apostolic and prophetic ministry. But always we pray together. They pray for our churches, and we pray for their churches. And so, through those Friday evenings, even if the people of our churches don’t get together very often, there is true fellowship established between our English-speaking churches and our Latvian Romani churches. To a large extent, our communion is through our apostle.

But what about where geography divides? If we never see fellow-believers in Boness, Belfast, Bedford, or Bridgend, how can we still be in communion with them (never mind those in Brussels, Brisbane, Blantyre, or Belo Horizonte)? In this case, even the area apostle can’t pop over and spend some time praying with them on a Friday night. So how do we maintain ‘the apostles’ fellowship’?

This communion becomes visible in things like ordinations as well. When †Bradford was ordained as an apostle a few years ago, †Leeds, †Glasgow, †Middlesbrough and †Newcastle all took part in the ordination (along with a number of retired apostles). The call to the apostleship came from the Apostles’ Council – which demonstrates that an apostle is not just recognised in some places, or in communion with certain churches – and the ordination itself was carried out by apostles from all over the north of England and Scotland. And so, even through the laying on of hands and the anointing with oil, the communion of the churches becomes visible.

All this means that the Bradford Area, or any other Area or Region for that matter, isn’t an insular, separate church, only looking in on itself. Instead, we can look out from Bradford to the world, enjoying a true communion with assemblies , both nearby and on the other side of the world.
Labels: apostleship Apostolic Church Ascension Ministries church ecclesiology ministry Pentecostal theology