A Foretaste of Heaven: Early Pentecostal Thoughts on Worship 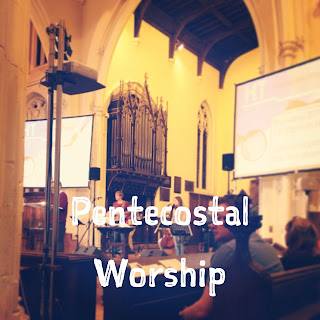 Several months ago I was talking to a lady from church about her experience growing up in the Apostolic Church. She told me about the Penygroes Conventions back in the days of D.P. Williams, and about what her assembly was like when she was young, under such pastors as W.R. Thomas (which is just the sort of thing that interests me greatly, seeing as I’m writing a PhD which deals a lot with both D.P. Williams and W.R. Thomas!). Anyway, as we were talking, it dawned on me that, when she would talk about ‘worship’ or ‘praise and worship’, what she had in mind was rather different from what most people of my generation or younger describe as ‘praise and worship’ today.

Now, more recently I was re-reading T.N. Turnbull’s Brothers in Arms (his biography of the Williams brothers). At a few points in the course of the story, Pastor Turnbull writes about worship. Although he’s writing history, not theology, and dealing with specific occasions, this is a Pentecostal pastor rather than an academic historian who’s writing, so some of his thought on worship shines through. Now, that’s interesting, because, not only was T.N. Turnbull writing over 50 years ago (1963), but also, he was someone who’d been involved in the life and worship of the Apostolic Church from the very earliest days of Pentecostalism in the UK. Tom Turnbull wasn’t trying to piece together and reconstruct what early Pentecostal worship would have been like – no, he was there and experienced it. (He might not have experienced all the particular events he writes about, for he’s writing history, not memoir, but he did experience early Pentecostal worship.)

And each time Turnbull writes about worship, he associates it with heaven. His first description is of the early days of the Penygroes assembly, back at the beginning of the Apostolic Church in 1911.


In the new building charismatic phenomena were in evidence. The bliss was such that it seemed as if the people had already entered into heaven. The Spirit of the Lord was manifested mightily. The nine gifts of the Holy Spirit were in operation continually, especially the voice gifts, divers kinds of tongues, interpretation of tongues, and prophecy. There was likewise healing and restoration of spirit, soul and body. By signs and wonders the Lord proved the veracity of His word.

Turnbull’s describing worship in Penygroes assembly as ‘bliss such that it seemed as if the people had already entered into heaven.’ He associates this with the manifestation of the presence of the Holy Spirit through the gifts and with the Lord speaking by His Word. Interestingly, he doesn’t have anything to say about music. We don’t know what songs they sang, what instruments they used, or any details at all about the musical side of things. In fact, if we stuck strictly to Turnbull’s description, we wouldn’t even know if they used to sing at all in Penygroes!

And this lack of mention of singing and music is a factor in all Turnbull’s descriptions of worship. (Off the top of my head, the only times I can ever remember him mentioning singing are at special events, funerals, and in the middle of a rather remarkable sermon preached by Jones Williams somewhere in North America.)

But even without singing, all Turnbull’s descriptions of worship connect it with heaven. Describing the very first worship service in the Apostolic Temple in Penygroes at its opening in 1933, Turnbull writes:


Solemn and ever to be remembered was the breaking of bread on that first Sunday morning in this new Temple. It brought God into the midst of the Convention as never before.

Worship here is chiefly tied to the Lord’s Table, and again, it’s heavenly, being associated with the presence of God. Now, it just so happens that I have a copy of the order of service for that Sunday morning, and whoever it belonged to originally made a few pencil notes on it about how things transpired. So, that means that I know that this heavenly time of worship at the Breaking of Bread actually led to less singing in the service! While there were some hymns in both English and Welsh earlier in the meeting (during the part which was considered the Ceremony of Opening for the Temple), after the sermon the congregation simply sang one chorus (Lest I forget Gethsemane – which they sang whilst seated) leading into the ‘Breaking of Bread Service’ which Turnbull writes about. The presence of God was such that the Breaking of Bread Service continued for over 40 minutes (remember, they’d already had all the hymn singing, the prayers, several addresses for the opening of the building, and the sermon – so this was just the portion of the meeting around the Lord’s Table!) and the planned closing hymn (The Church’s One Foundation) was never sung. As Turnbull says, this Breaking of Bread ‘brought God into the midst of the Convention as never before’, yet that presence of God had nothing to do with music or singing, and actually led to less singing rather than more.

Turnbull’s last description of worship is from a Convention in Melbourne, Australia in 1933 or 1934 (Turnbull doesn’t specify the date, but notes that it was during the centenary celebrations of the city held in 1933-34).


There is no sweeter time to an Apostolic member than that spent around the Lord’s Table, and on this occasion the members of the congregation found themselves drawn right into the heavenly places.

So, what can we conclude from Turnbull’s descriptions of early Apostolic worship? Well, certainly we can conclude that singing and music were not at the centre of their thought when it came to worship. I imagine that, if the early Apostolics were somehow transported into one of our modern Pentecostal meetings and heard us talk about a time of ‘praise and worship’, they’d be rather confused at the resulting time of singing. Now, I’m not at all suggesting that singing wasn’t part of their worship (you just have to look at our Welsh hymnbook, Molwch Dduw, to see how many hymns were written by the early Apostolics, so singing was certainly of some importance), but what I am suggesting is that, for them, ‘praise and worship’ was not equivalent to singing.

While singing doesn’t get a mention, the gifts of the Spirit, the preaching of Christ and His Cross, and, above all, the Breaking of Bread do. The focus then was on the Lord speaking by His Word, revealing Himself, and feeding His people. Our activity (our singing) was not nearly as important in their thought as God’s activity (in the Gifts, the Preaching of the Word, and the Breaking of Bread). The focus was on Jesus. In their worship they received God’s good gift in Word (preached and prophesied) and in Bread and Wine, and responded to these proclamation of Good News of salvation in Jesus.

And, as the Lord revealed Himself to them in His Word, in the Gifts, and at the Table, they knew and experienced the presence of their God. They enjoyed communion with the Father, Son and Holy Spirit, and so they had a foretaste of heaven.

May we have such a foretaste too, as we gather in worship around Christ’s Word and Table this Lord’s Day!
Labels: Apostolic Church D.P. Williams Gifts of the Spirit history Pentecostal sacraments W.J. Williams worship