Apostleship, Communion and Unity: The Bradford Area as a Test Case 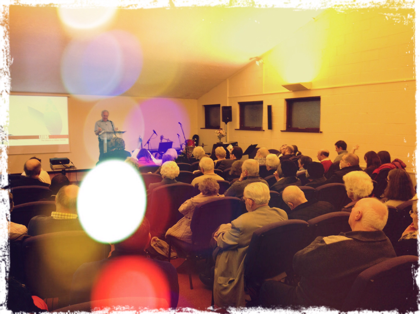 I’ve been thinking some very theological thoughts, so thought I’d try and clarify them by putting them into concrete terms. Last week I wrote about Benjamin McNair Scott’s book on apostleship and reflected a bit on Peter Wagner’s views. Today I’m going to write a bit more about apostleship (understood in a way rather different from that of Wagner).

I’m not sure how to say this without getting all my Apostolic and all my Anglican friends shouting at me at once, but, theologically, our apostles basically equate to their bishops. Before anyone gets annoyed with me for saying that, let me just say that, yes, functionally and practically there are significant differences (and even theological differences about the office itself), but theologically they play a very similar role. (And in case anyone’s worried that I’ve lost the plot and just started making things up, let me stress that this point isn’t original to me – I got it from D.P. Williams who saw the ministry of the Apostolic Church in terms of the 3 historic orders of ministry in the Christian church: the apostolic ministry/episcopate, the presbyterial ministry, and the diaconate. If you want to know about that, it’ll hopefully be in the final version of my PhD, as long as I don’t have to cut too many words.)

Anyway, Simon Chan (in his book Pentecostal Ecclesiology) has pointed out that Pentecostals need to build on their episcopal impulse (and, he notes, ‘whether [it] is called episcopal or apostolic ... is a moot point’, so, like D.P. Williams, he sees the connection between the two) by reflecting on what the church has already said about the historic episcopacy. In fact, he sees this as a significant way of guarding against misguided versions of apostleship (like the one advocated by Wagner). One of the things Dr Chan particularly highlights is the connection between the bishop/apostle and communion.

In the tradition of the Christian church, a bishop is a ‘focus and sign of unity.’ Thus the apostolic ministry is closely tied to the communion of the church. After all, the early church continued steadfastly not only in the apostles’ doctrine, but also in the apostles’ fellowship (Acts 2:42).

But what does that look like in practice. I thought I’d take the Bradford Area as a concrete example. Now, I realise things are a bit different up here than in other parts of the country, as we are the only Area with an area apostle who does not have the responsibility of a local assembly. But that’s part of the reason why I’m using our Area as my concrete example, as, in many ways, that helps make this communion aspect of the apostolic ministry more visible here.

So, here in the Bradford Area we (currently) have two apostles: let’s call them the apostle in Leeds (†Leeds) and the apostle in Bradford (†Bradford). †Leeds is the area apostle, †Bradford pastors the mother church of the Area. As he doesn’t have the responsibility of pastoring one local assembly, †Leeds regularly visits each of the assemblies in the Area. That means that each assembly sees him about once every other month – about 6 times a year – and so he’s much more than simply a visiting preacher. Such regular presence allows for a different kind of communion. The people in each church don’t know him simply as the area apostle who signs the odd letter or whom they see at one-off Area services. Instead, he is part of the life of their assembly. In a sense, he belongs to them – he’s not the pastor of a neighbouring church, but rather part of their own church: one with them.

And so when it does come to Area services, when †Leeds preaches or takes the Table, he does so not as ‘the’ apostle (imposing an authority from above), but rather as ‘their’ apostle (representing them and their churches, as well as standing in persona Christi). Thus the authority of the area apostle is an authority-in-communion: not an appropriation to the individual of authority, but the authority of the church expressed through the apostle in loving communion.

This communion of the people of the churches with the area apostle also has an impact on the unity of the area, for while he is ‘their’ apostle, he isn’t uniquely theirs. They share him with each of the other assemblies in the area. And so unity with the apostle brings with it unity between the assemblies.

Now, of course, it’s not the apostle who creates this unity. It is Christ Himself who is the unity of the church and who brings this unity of the church as one in Himself about through His Holy Spirit. The church is one, has always been one, and will always be one. Yet, we do not always live out the unity which is ours in Christ. But again, we need to be careful here, it’s not the apostle who enables us to live out this unity, but Christ the Head of the Church who ministers through the apostle. Christ is the true apostle, and so all true apostolic ministry can only be carried out in union with Christ. It is Christ the Apostle who is at work through his apostle.

So, as the area apostle draws the assemblies together in unity, it is Christ who is at work drawing his people together as one. This isn’t an imposed unity, but a unity in loving communion, which then expresses itself in prayer, and care, and fellowship. As the area apostle moves about among the assemblies, the people of the assemblies hear of what’s going on in each of the other assemblies – not through a formal report, but in the context of fellowship – and that leads to opportunities to pray for one another, to provide help and care for one another, and to join together in worship in united fellowship.

In our Area we don’t have a lot of Area services. Gone are the days of District rallies and Area conventions. Apart from special events (like ordinations, installations and farewells) we only tend to get together (as churches) twice a year: on Good Friday and at Whitsun. Both happen in Leeds, so I’m always one of the last to leave. So I can tell you this, despite the infrequency of our combined services, there is a warm communion between the people of the various assemblies in the Bradford Area. We’re united, not by a vision statement (we, thankfully, don’t have such a thing) or a style (in all our unity, there’s a wide stylistic diversity between the assemblies of the Area). Rather, we’re united by and in Christ through the Spirit, and that unity and warm fellowship has been expressed throughout the year in our communion with our area apostle. As the area apostle shares in the life of each of our churches, then our churches share in each other’s lives through him.

Now, maybe some of that sounds a bit strange. But for those of you who are part of the Bradford Area, although you might not have quite expressed it like that, you can probably recognise our experience in what I’ve written. I’ve simply tried to express a bit theologically the lived reality of the church in our Area.

Our area apostle is about to retire, and things will look different in the future. Not every apostle is the same – as I said at the outset, for these last five years the Bradford Area has been somewhat unique – but this happens to be one of the great strengths of our current apostle. He’s a good and faithful preacher of Jesus Christ, excellent in administration (as the wider Apostolic Church in the UK well knows!), a caring pastor to the pastors and elders of the Area, yet in and through all those things he’s brought a deeper communion between the churches of the Area. (I imagine that at his farewell service, we’ll see quite concretely that he really has been a focus and sign of our unity.)

Now, if people had been expecting a Wagner-esque ‘apostle’, with his extraordinary authority, mega-church building, and ‘catalysing’ of ‘networks’, they might be disappointed. Our apostleship simply doesn’t look like that (and nor, would I argue, should it). Instead we’ve got something much better. For, if people are looking for one sent from Christ the Head of the Church as a representative in the outworking of His purpose in the church, then what could be better than an apostle who builds up the churches in unity together in Jesus! After all, Christ’s prayer for the church is ‘that they all may be one, as You, Father, are in Me, and I in You; that they also may be one in Us, that the world may believe that You sent Me’ (John 17:21).

Most of the assemblies in our area have been growing over the past few years. In several of them the congregation has doubled or more than doubled. But in all of them there’s been a much more significant growth: a spiritual growth, a growth in Christ-likeness. We’ve been growing together as a church in the area in health and maturity in Christ, and our communion together has been a significant factor in that. And so, I rather suspect that that growing in healthiness has a lot to do with the growing congregations.

So, when our area apostle retires next month, we don’t need to panic that things are going to collapse. While a Wagner-esque ‘apostleship’ of extraordinary authority rests very much on the man, an apostle who builds as the focus and sign of unity builds something that will stand strong and stable long after he’s gone. Ephesians 2:20 talks about the foundation laid by apostles and prophets. If an apostle tries to lay a foundation in his own charisma, it won’t last long after him. But a foundation laid in loving communion (which is, after all, the very nature of the Triune God) is a foundation laid deep in Christ, and so in Christ it will stand strong.

Anyway, that’s plenty for now. Next time I’ll write about how that connection of communion and apostleship works beyond our own internal life as an Area.
Labels: apostleship Apostolic Church Ascension Ministries church ecclesiology ministry Pentecostal theology