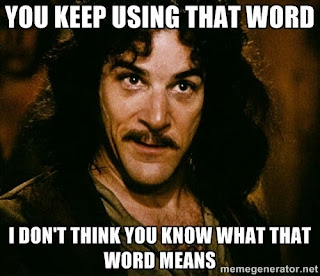 I’m in the middle of reading a fascinating book by Benjamin McNair Scott on apostles (Apostles Today: Making Sense of Contemporary Charismatic Apostolates: A Historical and Theological Appraisal). It’s the book of his PhD dissertation, which is fascinating enough in itself – a PhD on apostles in the church today by a Church of England priest.

It’s already got me thinking a lot. After all, I’m an Apostolic, and if there’s one thing people generally associate with the Apostolic Church it’s our belief in apostles for today. And what’s more, I wrote my MTh dissertation on apostleship, and the subject even makes it into one of my PhD chapters as well.

One of the things it’s got me thinking about is how our theology can easily be changed or even subverted through unnoticed redefinition. I’ve written somewhere before (though possibly not on the blog) about how Wayne Grudem’s view of prophecy totally transforms what prophecy is by classical Apostolic understandings. However, there haven’t been any books in print which present the Apostolic understanding for decades and we no longer have our own theological college or any source of theological training for our pastors in this country, so they have no access to teaching on the classical Apostolic understanding (other than what might or might not have been handed down in church life). Grudem’s books are both readily available and widely recommended (I, too, often encourage people to get hold of some of his books, like Bible Doctrines, Systematic Theology, or Evangelical Feminism and Biblical Truth) and so people read what he says about prophecy and often accept his definitions. Thus, without really realising it, our understanding of something like prophecy is transformed by redefinition. (Now, I’m not saying this has entirely happened in the UK Apostolic Church, but I do hear more and more people speaking about prophecy in more and more Grudemesque terms. So the influence is there, and I reckon it’s growing.)

Anyway, one of the chapters in McNair Scott’s book has got me thinking on the same lines about apostleship. In one chapter he presents an overview of the teachings of 5 popular charismatic teachers on apostleship, and it demonstrated to me just how radically different some of the common ideas about apostleship doing the rounds today are from the either the classical Apostolic position or the biblical view (which, after writing an MTh on the subject, I’d argue aren’t that far apart).

Anyway, if you want the 5 overviews, get McNair Scott’s book and read it. But I just want to take one as an example here of the radical difference: C. Peter Wagner.

Wagner defines an apostle as:

a Christian leader gifted, taught, commissioned, and sent by God with the authority to establish the foundational government of the church within an assigned sphere and/or spheres of ministry by hearing what the Spirit is saying to the churches and by setting things in order accordingly for the expansion of the kingdom of God.

(The definition is from Wagner’s book Apostles Today, and is cited on p.66 of McNair Scott’s book.)

Yes, Wagner talks about church government – but he seems to set the apostle outside of that government. The apostle can establish government in the church, but he doesn’t appear to be subject to it. For Wager, a single apostle has ‘”extraordinary” spiritual authority “to assume and exercise general leadership.”’ Apostles, he insists, have ‘exceptional authority.’ This might be over a network of churches, over individuals, over a specialised ministry, or over a geographic territory!

Essentially, Wagner’s apostles are non-ecclesial. Some of them might take authority over churches, but they don’t seem to come under the authority of the church and seem to be able to exist far outside the structures of the church. What’s more, they seem to be, to a large degree, lone-ranger apostles. Yes, Wagner leads some sort of coalition of apostles, and he talks about horizontal apostles who bring apostles together to cooperate in things, but this is essentially a coming together of individuals. It is not a collegiate apostleship (one of the fundamental marks of Apostolic apostleship – when the 2016 ‘centenary’ comes round next year what it’s actually the centenary of is a stand our apostles took over collegiate apostleship against an attempt by an individual to assert his own apostolic authority).

Apostolic apostles cannot be non-ecclesial, because our whole understanding of apostleship is tied up with Christ’s Headship of the Church. Christ, the Head of the Church, is the true Apostle (Heb. 3:1), and He gives gifts of men to His Church, who, through their ministry in union with Him, express His apostleship. That’s also why we need a collegiate apostleship – no one man by himself can express the fullness of the apostleship which is in Christ Jesus.

(The non-ecclesial nature of Wagner’s apostles comes across too in the way he links them with ‘the expansion of the kingdom,’ rather than the building of the Church. I’ve been hearing this creeping in recently in our circles – the idea that the church exists for the kingdom. But in Apostolic theology it’s the other way round. Christ and His Church are at the centre of Gods’ Eternal Purpose. As D.P. Williams wrote, ‘There is nothing higher nor nearer the heart of our glorified Lord than His Church.’)

Wagner’s talk about ‘hearing what the Spirit is saying to the churches’ troubles me as well. Here we have a man, who is accountable only to God and perhaps any peer-to-peer apostle accountability that he has set up for himself, who comes to the church to tell them what the Holy Spirit is saying. Yet, when the true and living God speaks, He speaks an open Word. He doesn’t give secrets to individuals so that the church must receive their secret knowledge. That sounds much more like Gnosticism than Christianity. When God speaks in prophecy, He encourages – in fact, commands – the church to weigh and judge it to make sure that it is God speaking. We are not to accept that something is of God just because one person says so, even if they claim the sort of divine authority Wagner seems to want to give to his ‘apostles.’

Wagner also differentiates between the gift of apostleship and the office of apostle. McNair Scott summarises this: ‘the gift is given by grace alone, but the office is attained “as a result of works that have demonstrated faithfulness in stewardship of the gift.”’ Perhaps I’m misreading McNair Scott’s summary at this point, as I realise now that the word ‘attain’ is his word, not part of the quote from Wagner, but this sounds like it makes God’s Gifts (for the office is a gift to the church, even if Wagner wants to separate the two terms) dependent, not on grace alone, but on grace and our cooperation with grace. This, then, leads people’s understanding of grace and gifts away from the Reformation evangelicalism to a much more Roman position (especially given the huge emphasis which Wagner places on apostleship – with such a view it’s only to be expected that people would take it as a model of how God’s giving of gifts works in general).

Ultimately, I fear that Wagner’s view of apostleship leads to a Theology of Glory (as opposed to a Theology of the Cross) – looking for God and His works in the things that seem biggest, brightest and best to us, rather than looking at them through the Cross. For example, Wagner’s idea of an ‘congregational’ apostle is the pastor of a very big church – one that grows beyond 700 or 800 people. Now, maybe this shouldn’t be all that surprising – after all, Wagner was the ‘church growth’ guru – but numbers are all that matters here. In worldly terms, it looks successful. And so apostleship is, for Wagner, associated with (apparent) success. He even advocates something he calls a ‘workplace apostle’ (the whole idea of which seems to have no biblical support) who are business entrepreneurs who can be identified ‘owing to their level of wealth’!

Contrast that with D.P. Williams, who insisted that apostleship entails suffering in fellowship with Christ. The Church and her ministers ‘can hold glory only to the extent that we are crucified.’ Unless there is this sort of cruciform apostleship, they’ll be like ‘children playing on the seashore’ with ‘superficialities’ rather than ‘facing the rough seas’ and so venturing into the deep waters of God’s Eternal Purpose in Christ. When Williams talks about the power of apostles, he writes:

The Apostleship is invested with power and authority to carry forth the Revelation committed unto them: in prayer, intercession, the ministry of the Word; to preach, teach and heal; to toil, labour and suffer; to ordain Elders, impart spiritual Gifts (confirmed of God with signs and wonders); to rule and govern with demonstration of Divine wisdom, knowledge and discernment.

See that – power to suffer. (And, by the way, the power, he says, is invested in the apostleship, not in a lone apostle.)

Ultimately, my fear is that Wagner’s view of apostleship leads to a rather man-centred message. It seems like he places a lot of emphasis on the importance of having (his version of) apostles – so much so that the church must restore them in order to experience a great end-times revival. He sees apostles as being able to ‘take territory from the enemy and convert it to the kingdom.’ In fact, on the website of his coalition, the statement of belief states that the fivefold ministries (including apostles) will ‘establish the Kingdom of God on earth’! Surely only Jesus can give reviving, not mere men, and certainly only Jesus can establish His Kingdom.

Apostles are not the hope of the church, only Jesus is. As D.P. Williams warned, ‘If we put our trust in the gifts, and not in the Giver, we shall soon become prodigals from our Father’s Home.’

Anyway, I’m sure I’ll have more to say about McNair Scott’s book in the future, as I haven’t finished reading it yet (and also, he’s already promised that he’s going to talk about apostleship in the Apostolic Church in a later chapter).
Labels: apostleship Apostolic Church D.P. Williams prophetic theology Theology of the Cross