Toward a Pentecostal Theology of the Lord’s Supper (A Review) 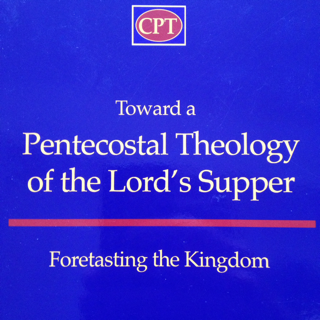 Review of Chris E.W. Green, Toward a Pentecostal Theology of the Lord’s Supper: Foretasting the Kingdom (Cleveland, TN: CPT Press, 2012)

Chris Green’s book is fascinating, stimulating, encouraging and challenging all at the same time. It’s also astonishingly brave: Chris manages in one book to write on Pentecostal and Charismatic Studies, historical theology, New Testament Studies, hermeneutics, and systematic/constructive theology, and all with the odd bit of liturgical studies here and there for good measure. (To be fair, more theologians should do this, but more often than not we stick to the safety of our own chosen sub-discipline.) And, although it is an academically rigorous work (it’s the published form of his PhD dissertation), he writes for the church, and particularly for Pentecostal churches.

Dr Green has demolished once and for all the erroneous, but sadly frequent, claims that Pentecostals have a low view of the sacraments (or that they don’t believe in sacraments, just ordinances) and that Pentecostals take a purely Memorialist (Zwinglian) view of the Lord’s Supper. While, as I’ve demonstrated in the past, such claims were never true of British Pentecostalism or of the Apostolic Church, Green now provides significant evidence that such claims are equally erroneous when it comes to North American Pentecostalism, both in its Holiness and Finished Work varieties. Through a meticulous sifting of early Pentecostal publications he demonstrates the high view that early American Pentecostals had of the sacrament, and connects this with the view held in Britain by looking at articles from Confidence (the earliest British Pentecostal magazine, published by Alexander Boddy) as well.

One particularly interesting aspects of this historical evidence is the significant focus given by the early Pentecostals to healing at the Table. Interestingly there is a frequent association of healing with the bread: the bread being seen as given for the healing of the body and the cup for the forgiveness of sins. (Interestingly, this echoes Cranmer’s distinction of benefits of the body and blood in the Prayer of Humble Access.)

Green’s constructive chapter advances the high sacramental insights gained from the historical research, all the while dealing with significant questions which arise within a Pentecostal setting (such as immediacy/mediacy of Christ’s presence, spontaneity versus form in worship, and the role of the Holy Spirit at the Table).

By the way, this book is also exciting. And I don’t just mean intellectually stimulating (which it is), but it’s a book that will get you excited about and looking forward to breaking bread with the church next Sunday.
Labels: books church Pentecostal recommendations sacraments theology worship