Preaching Sessions (Understanding the Bible & Christ in All the Scriptures) 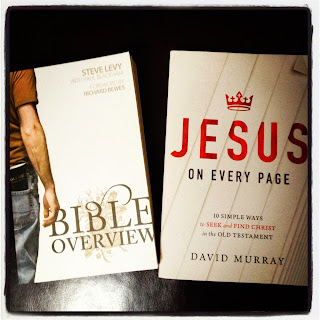 Last night we had the second set of preaching sessions for the Bradford Area pastors and elders. Last month in the first two sessions we had started off with a theology of preaching. This time we were looking at understanding the biblical text, so the first session was a very rushed, brief guide to interpreting the text. It was supposed to be Hermeneutics: Grammatical, Historical & Christ-focused (but we didn't actually get as far as the Christ-focused bit until the second session.) The second session was on Christ in All the Scriptures, and this was the most important (and I think most people would agree, most enjoyable) part. An overview of hermeneutics by itself is useful, but not enough. After all, Jesus made clear in John 5:39-40, 46 that you can exegete as thoroughly as possible, but if you miss Him, you won't have properly understood the Scripture.

I didn't get to cover a lot of the stuff I had planned for each session (hence the rushed-ness of the first session), but hopefully some of the basics got across. By the way, you can find all the sessions in the series together in one place on the Audio page (and November's will be added there too when we get that far).

I recommended two fantastic books at the end, both of which are really easy to read.

By the way, in the first session, I told people to read the Bible. On the way home in the car, I was thinking about that and was a bit concerned that I was making it sound like a weighty duty. I still stand by my position that if you're going to preach, you should have read the Bible, but I'd just like to add that that's a good, joyful thing, not a terrible burden. Anyway, here are two (short) older posts about how reading the Bible is a joy rather than a duty: Bible Reading - Duty or Joy? and If that's what the Bible is, then it's not a book you're avoiding! So if you feel I overburdened you, have a look at those two posts.

Next month we'll be thinking about moving from the text to the sermon, so hopefully we'll be talking about the delights of Law-Gospel preaching, we'll think about application, and we'll touch on some more theology too (thinking about the Trinitarian nature of preaching, the role of the Holy Spirit, and the ministry of the keys). Well, that's the plan - as long as I haven't prepared far, far too much again!

Finally, here's the little video we watched at the end of the second session. (We spent the main part of the session talking about the presence of Christ in the Old Testament, so didn't get time to focus too much on this true and better stuff, but hopefully it will whet people's appetites.)

P.S. I'd hoped we'd get time to work through some case studies. (I did give a very brief mention of David & Goliath and Peter and Jesus walking on water but the original plan had been to work through them in groups looking at the text carefully.) So if you were there and want to think through a few more passages, here are some of the other case studies that I had hoped we get a chance to look at.